Ghelinta, a tiny town in deepest Transylvania, is home to a church whose amazing interior wall paintings look almost as fresh as when they were first put there, six or seven centuries ago. What’s more amazing is that these frescos had been entirely forgotten 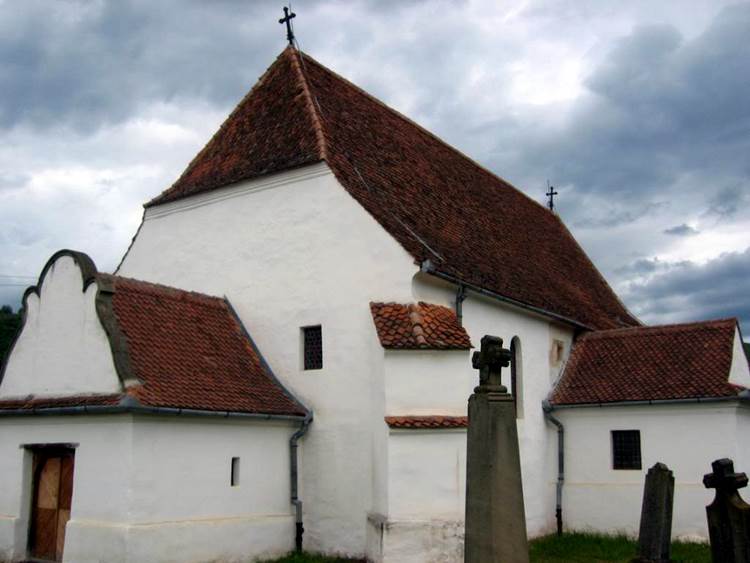 for untold years until being rediscovered in 1882, thus saving the whole building from scheduled demolition.

Although located in Romania, the town is almost entirely Hungarian speaking and is known as Gelence in that language. The church is dedicated to St Imre, a Hungarian prince who died young, in 1031, before he could inherit the king’s throne. But it’s another Hungarian royal, a king named Laszlo I, who is the subject of some of the finest paintings inside.

Two horizontal series of pictures adorn the church’s north interior wall. The upper one of these, dating from roughly 1330, depicts a legend from Laszlo’s time as ruler and defender of the Hungarian kingdom, of which this area used to be a part. He was celebrated, among other things, for repelling an attempted invasion by a nomadic warlike people named the Cumans during the 1080s. In these pictures, he is seen catching and punishing a Cuman who kidnapped a young Hungarian woman and galloped 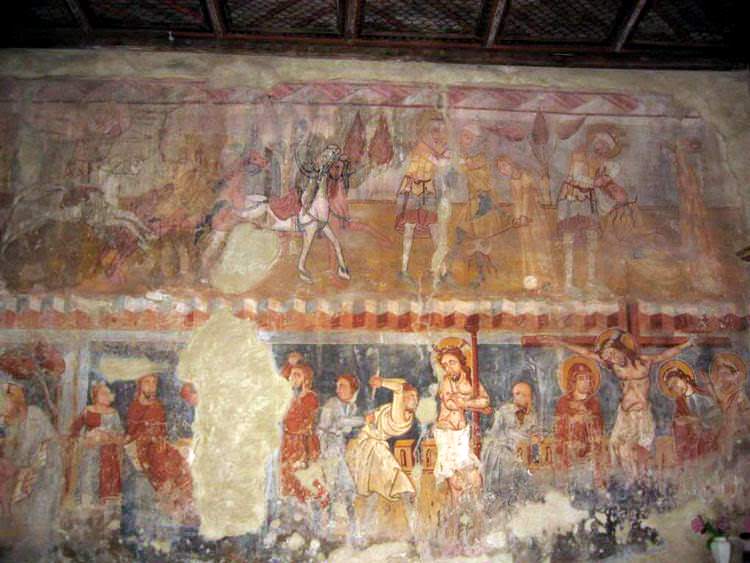 away with her on horseback. Laszlo can be seen stabbing the Cuman with a sword. He then encourages the woman to push the Cuman from the horse. Next, the two men are seen wrestling. In the final frame, Laszlo grabs the Cuman’s hair and the woman holds a sword and smites him.

Laszlo is believed to have something to do with the fact that there are so many Hungarian speakers in this area. He was thought to have been the first ruler to post Hungarian speakers to this region to defend what was, at the time, the eastern frontier of his kingdom.

Right below his pictures is another series of paintings which date from 1419. They show the more famous story of the Passion – the successive stages Jesus is supposed to have gone through, from his Last Supper, via his judgment by Pontius Pilate, to his Crucifixion.

Besides those two picture stories, many other pictures are painted onto the church’s inner walls, mostly showing saints’ lives and 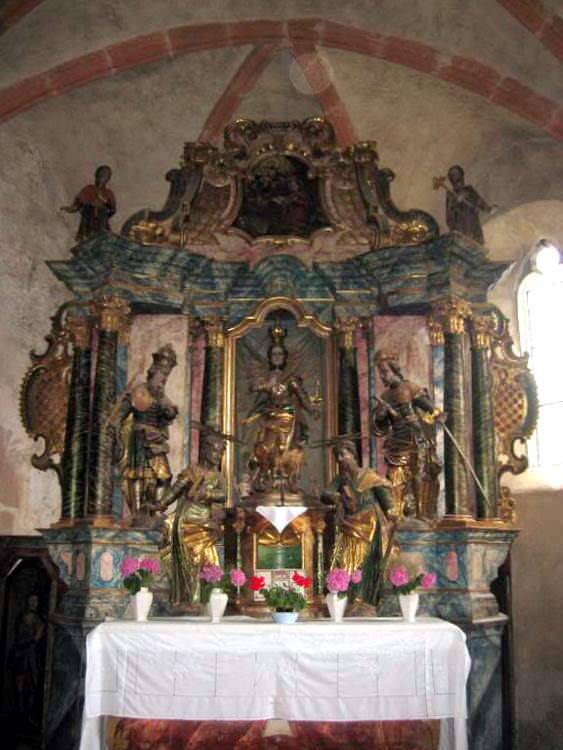 scenes from the Bible.
The church is a 13th century construction, though it went through several modifications in ensuing centuries. It’s surrounded by a protective wall with its main gate passing through a bell tower. An 1802 earthquake damaged the building, and in 1858 it stopped operating as a church because it seemed in danger of collapsing.

If you were hoping to find something a little older, take a look at the baptismal font. It is a millennium old, having been used in the original church building that stood on this spot before the present one was erected. Relative youngsters among the church’s fittings are its ceiling, consisting of painted wooden cassettes that were installed in 1628, and the 1766 organ gallery.

The church also has a very eye-catching altarpiece, at the center of which is a secret place for storing the communion host. It is a rotating compartment designed to prevent the host from being stolen by burglars. The church was broken into on five different occasions over its lifetime. Look to the left of the altarpiece and there is another unit for storage of holy objects, with strange characters written on it. These are Hungarian runes, in which the language was written before the adoption of the Latin alphabet. Reading right to left, the characters spell out the year this storage place was created: 1503.

Ghelinta is on road 121F and is about 40 miles northwest from the major city of Brasov.

Written by and Photos by David Hill for EuropeUpClose.com

This is near my husband's home town and it is a place we visit nearly every time we go 'home.' Each time we see it in a way we didn't see before. The old ceiling tiles are beautifully painted wood and have a motif selected by the donor who contributed to the church's construction. It certainly is worth the visit. The drive out there is a great way to see the Transylvania countryside as well.

WHAT COULD I SAY OF THIS ARTICLE????

BEAUTIFUL PLACE....ALL THESE WALL PAINTINGS....GORGEOUS!!! I WISH I COULD GO AND VISIT THIS BEAUTIFUL PLACE SOON... THANKS FOR SHARING THIS WITH US... :)