Freiburg, located in Germany’s Baden-Wurttemberg region,  is normally associated with Black Forest cake (cherry-and-chocolate gateau) and cuckoo clocks. Although you can find all this here, Freiburg has many other things to offer: gothic architectural highlights mirroring the city’s changes through history, excellent wine, numerous cultural events and an eco community that has its own political green party. 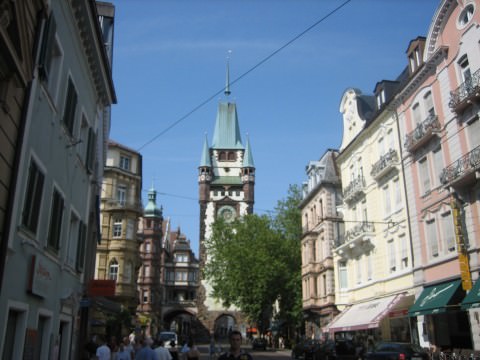 The Martinstor, one of the original city gates in Freiburg

Just a short hop from the Basel Mulhouse airport which is operated jointly by three countries (France, Germany and Switzerland), is the charming university town of Freiburg. This solar city at the western edge of the Black Forest is known for its sense of “green-ness”. The old-town center is car-free; it’s one extensive pedestrian zone of streets, squares and lanes, and the city boasts more than 380 miles of bike lanes. Freiburg has been called the Beijing of Germany because the citizens of Freiburg  love bicycling and recycling.

If you’re lucky enough to watch a professional soccer match in Freiburg, you’ll be seated in the Badenova Solar Soccer Stadium (formerly, Dreisam Stadiuism, a 55-year-old facility). In 1995, 158 soccer fans paid for the first solar installation on the south roof and were rewarded with one year of season tickets. By 2003, every grandstand roof had solar photovoltaic panels. 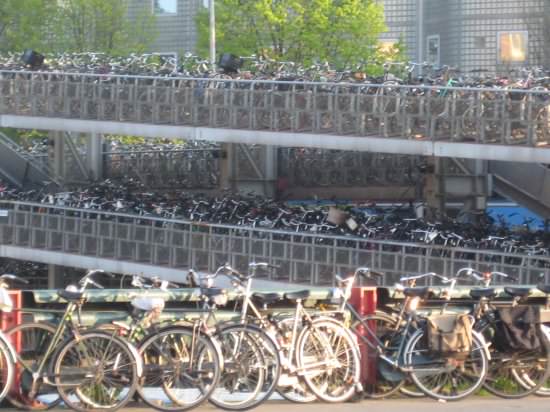 Bikes are a popular means of transportation in Freiburg

Because of its scenic beauty, relatively warm and sunny climate and easy access to the Black Forest, Freiburg is the  tourist hub for visiting this region. There are many architecturally interesting areas of Freiburg; including the Augustinerplatz, one of the central squares in the old city. Formerly the location of an Augustine monastery which became the Augustiner museum in 1921, it is now a popular social space for Freiburg’s young people. It has a number of restaurants and bars and includes the local brewery, ‘Feierling’, which features a beer garden. On summer nights, students gather here to sample some of the best of Germany’s beers.

The Historisches Kaufhaus, or historical marketplace, is located in a Renaissance building constructed between 1520 and 1530 and was once the center of the financial life of the region. It’s decorated with the coat of arms of the Habsburgs.

One of the best ECO hotels to stay in while visiting Freiburg is the Best Western Premier Hotel Victoria.  While this hotel was built in 1875, it has recently joined the green movement – now billing itself as a “zero emissions” hotel. It uses no more power than it generates, thanks to its solar roof and an investment in a windmill and an eco-power supplier. The hotel recently switched to non-phosphate cleaners, and it has eliminated pre-packaged goods from the breakfast buffet. Rooms are comfortable with organic linens and some of the deluxe rooms have unique themes. 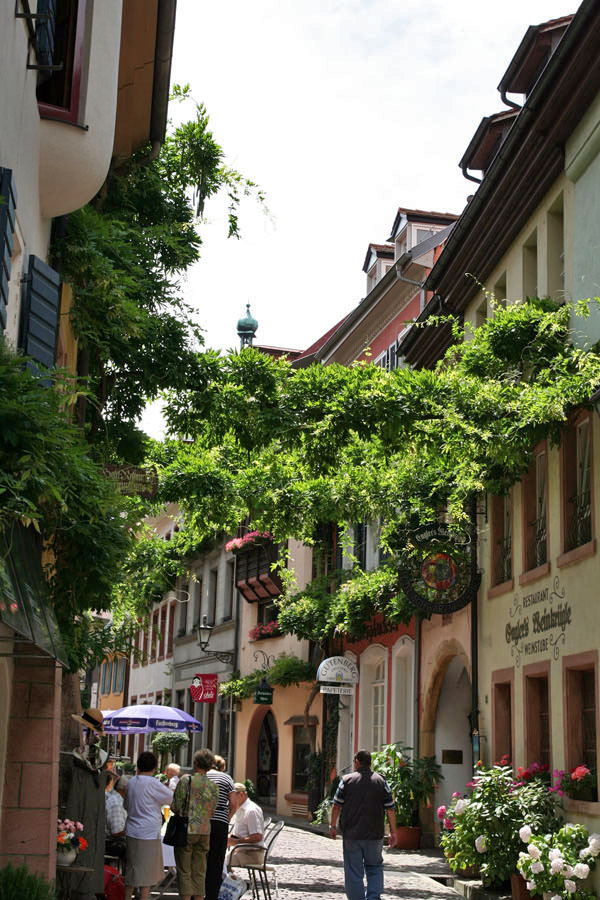 Pedestrian zones are a hallmark of Freiburg

Due to the area’s climate, Freiburg is also considered one of Germany’s top wine producing towns. The town has been surrounded by fertile vineyards since the 13th century and wine has become an integral part of people’s everyday life. Every year, the residents of Freiburg celebrate the quality of the region’s fine vintages at a four day wine festival held at the Muensterplatz. As many as 300 wines are featured.

Freiburg is a live, vibrant city with a variety of annual festivals and fun-filled events. Though this city is small enough that almost everything is within easy walking or biking distance, Freiburg is also large enough to offer a rich cultural life of its own. Its focus on keeping the area green and leading the eco movement in Germany is to be commended and followed.

I loved it there!!! Went hiking/biking in the Black Forest. Great shopping, too!!!

Thanks for the memory!!

Thanks for telling about an eco destination. Since a young child I'd heard of the Black Forest...never been. I wrote a blog post on shoes and Dusseldorf on my Word Press blog.