Over three centuries old, the Peter and Paul Fortress still intimidates. We had crossed a fortified bridge and passed under a massive arched gatehouse, all of which would have been armed with guards a few centuries ago. When we entered the fortress, a heavy summer sun scalded the cobblestones. We walked down a wide lane seemingly out of a history book. A stone embankment rose on one side, blocking our view of the river; ahead gleamed a church spire, the gold leaf glittering with heat. 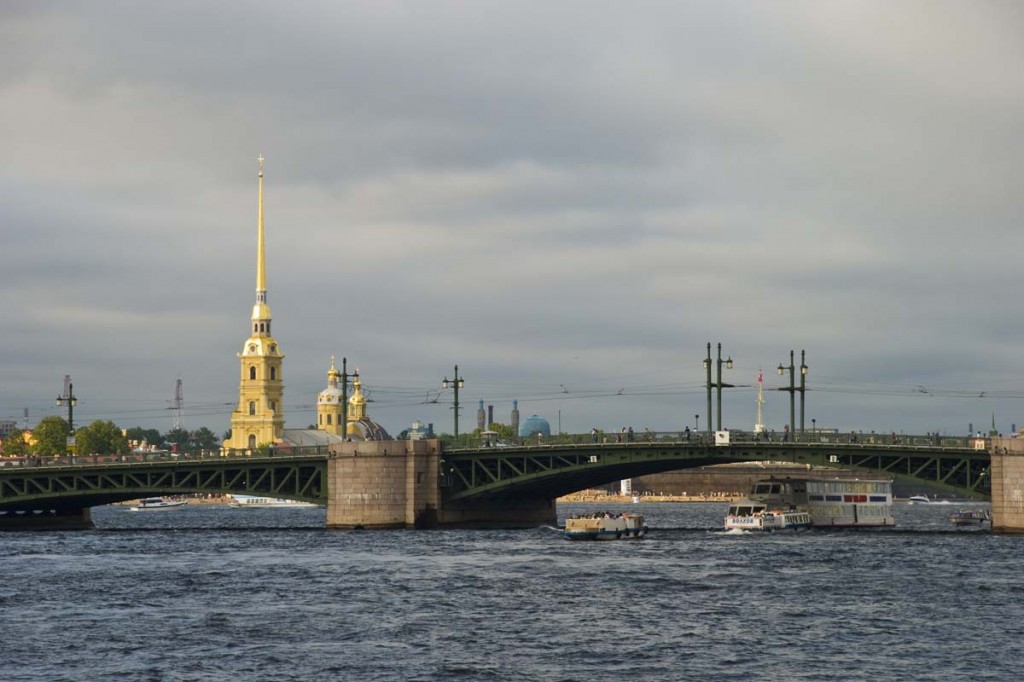 Modern St. Petersburg spreads out from the Neva River, a tangle of commerce and confectioner’s architecture. The river was once a swamp, spreading cold fingers through the landscape. When Peter the Great began construction here, his first priority was defense against the Swedes. But the settlement of a key waterway marked the beginning of a larger project. Peter’s walled citadel formed the nucleus of what later became St. Petersburg. 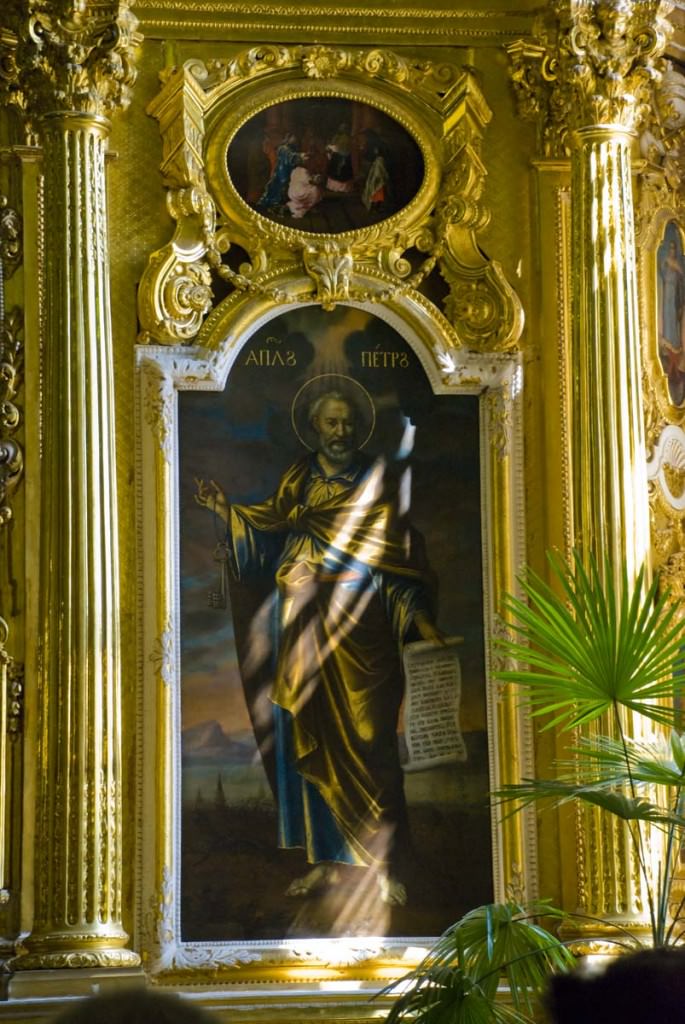 The old military fortress is now a heritage site. It sits on its own walled island, both physically and chronologically separated from the rest of the city. Just inside the gatehouse, concrete turns to cobblestone, and car horns give way to ritual cannon shots. Each attraction in the fortress charges a separate fee, but a combined-entry ticket gave us access to most of the island’s sights.

A somewhat dusty meander through time, the City History Museum tracks the St. Petersburg area from prehistory into modernity. The archeology exhibits seemed a bit musty, featuring miniature replicas of military encampments and plenty of maps. But the displays improved as they shifted into the Tsarist heyday. The Decemberist rebels, who rose up against the Tsar and were imprisoned in the Fortress dungeons, are given ample coverage; many of the investigations into their plots took place in that very building.  The museum’s best exhibits focused on everyday life during the 19th century: period costumes, advertisement posters, interactive digital displays, and even a replica of a middle-class bathroom all give a fascinating glimpse of life under the Tsars.

Sunk deep in the Fortress, the military prison tour tells a different tale: what happened to the Tsar’s enemies. Here the Decemberists awaited exile or execution. Other famous prisoners – including the author Fyodor Dostoevsky – also spent time in these cells.  After a tour through the grim prison, it was a relief to emerge again into the sunlight.

The rooftop of the SS Peter and Paul Cathedral sparkles above the walls. The Orthodox cathedral bedazzles the eye with gold and pastel ornamentation. We stood over the tomb of Catherine the Great, sounding out her name in the Cyrillic alphabet. Sunlight drifted in through the high windows and glinted on the marble tombs. It seemed a fitting graveyard for Russia’s royalty – ambitious, audaciously ornate, and very exclusive.

In the fortress print shop, I watched craftsmen ink-printing in the old style. Thick metal presses joined ink to paper with massive force. Wearing aprons stained black, the craftsmen aggressively spread and re-spread the ink, sometimes smudging it with a brush to obtain the proper viscosity. The process seemed both severely mechanized and unpredictable. Although the print shop has mostly become a gift shop for postcards and letterpress, it was worth a stop to watch the printing process in motion. 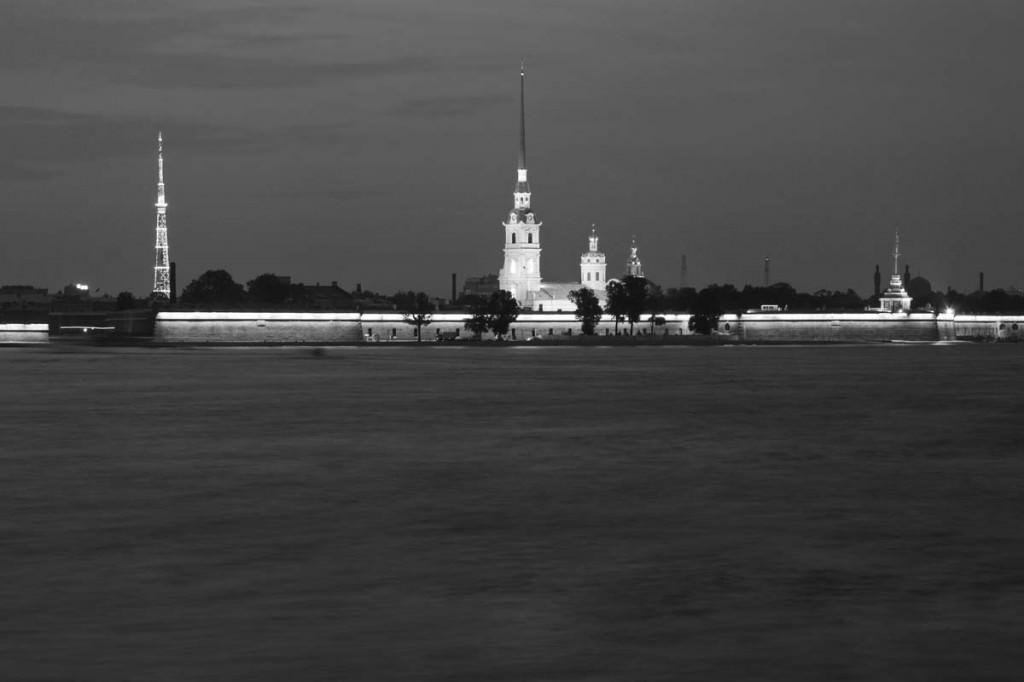 For an additional fee, visitors can also stroll atop the outer defensive wall. A walkway traces the southern wall in its course along the Neva, with views out to the city center. The river sluices by, grey and full of ferries. Outside and beneath the wall stretches on a thin strip of beach, which in summer is swarmed by eager beachcombers. The river’s current may discourage swimming, but the beach is still a popular escape from the heat, and towels and picnic baskets quilt the sand.

St. Petersburg’s mansions and palaces stretch languidly on the opposite bank, seemingly oblivious to their martial origins. It’s an impressive view. From a swampy backwater, St. Petersburg grew into one of Europe’s largest cities. We stood on the stones that started it all – the first pieces of St. Petersburg, which still remain to guard the city and bear witness to its growth.

Written by Caitlin Dwyer and photos by Matt Bozigar for EuropeUpClose.com