Paris’ world-famed bookstore, Shakespeare & Co., went through some rough times in earlier days, but all’s well that ends well. The book-filled store at 37 Rue Bûcherie, a few steps from the Seine River, Ile de la Cité and Notre Dame Cathedral, is going strong, and represents a significant piece of Parisian and literary history. 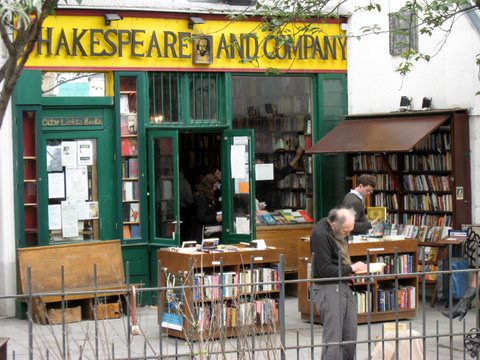 The first Shakespeare & Co. store, in another Paris location, was opened in 1919 by Sylvia Beach, an American who wanted to sell English-language books, and for a time it flourished.  French and American authors often gathered there for readings and a sense of community. Beach was one of the first to recognize the genius of James Joyce, and she bankrolled the publication of his controversial novel, Ulysses. It left her heavily in debt and later, during the Great Depression in the 1930s, she kept the store afloat only through donations from her wealthy friends. The “Friends of Shakespeare & Co.”, organized by André Gide, paid to attend readings, and the business recovered and did well. Then came World War Two. Paris fell to the German forces, and in 1941, Sylvia Beach closed her store.  She wrote a book about her experiences, Shakespeare and Company, before dying in 1962. She was subsequently honored for her work and support of artists and authors.

Now the story shifts to a new era. George Whitman, born in 1913, led a highly adventurous life before he came to Paris and, in 1951, opened his own bookstore. A great admirer of Sylvia Beach, he changed the name of his store to Shakespeare & Co. in 1964. That’s how it happened that today, Sylvia Beach’s legacy continues, as book-lovers and tourists from around the world browse the store, leafing through the thousands of books that cram every shelf and spill onto tables outside.

See George Whitman’s daughter describe the beginnings of Shakespeare and Company
and her vision for the future of this Paris icon.

The place is more than just another bookstore. George Whitman called it “a socialist utopia masquerading as a bookstore,” as he welcomed travelers who came to Paris without a place to stay. They slept, and occasionally still do, in the building’s nooks and crannies (it was a monastery in the 16th century) and help out in various ways. Whitman’s daughter Sylvia (named for you know who) runs Shakespeare & Co. now, retaining and adding to her father’s offerings. There are poetry readings, writers’ meetings, Sunday teas, and a marvelous biennial literary festival. A new music and spoken word series, ” The Standing Room”, is now presented by musician and artist Piers Faccini.  An emailed newsletter goes to anyone who requests it. The website, www.shakespeareandcompany.com, provides a wealth of information, including George Whitman’s own 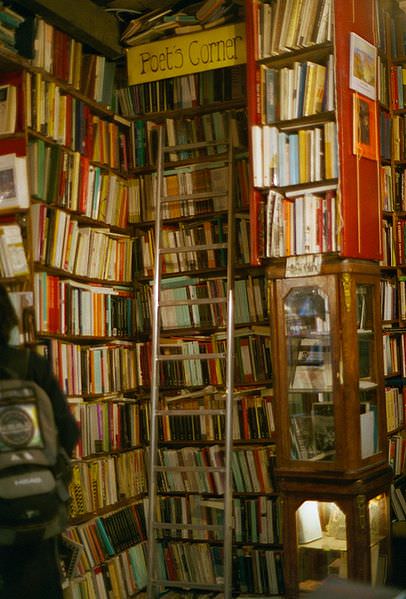 The original Shakespeare & Co. began in a time of energy and excitement, the 1920s, when the leading lights in music, art and literature flocked to Paris. Picasso, Stravinsky, James Joyce, Ezra Pound, Gertrude Stein, Hemingway and dozens more were all there, and many came to Sylvia Beach’s shop for the readings and the friendships. Some came to sleep and some to borrow money.

I missed all that, and I missed the Beats in the 1960s, when Allen Ginsberg read Howl outside on the footpath and William Burroughs researched The Naked Lunch in the library upstairs. But the same warm welcome and atmosphere remain; Shakespeare & Co. is just as vital, full of interesting conversation in person and on the page, and that’s what I go for whenever I’m in Paris.