When I’m out and about in a different country, I make it a point to eat lots of street food. This is one of the best ways to put my finger on the foodie pulse of a city, to begin to discover the building blocks of a country’s culinary culture.  Berlin is home to some of the best and least expensive street food in all of Europe. A truly international city, hungry sightseers like me are never at a loss for options. Here are a few of my favorite quotidian snacks from my recent trip.

Puddingbrezel
I’m not usually a fan of prezels- or “brezels” in German- but this is a treat not to be missed. A puddingbrezel is a sweet prezel filled in with custard and sprinkled with rock sugar. I ate one nearly everyday for breakfast and some of the best puddingbrezels I had were at the Friedrichstrasse U-bahn stop/ train station. 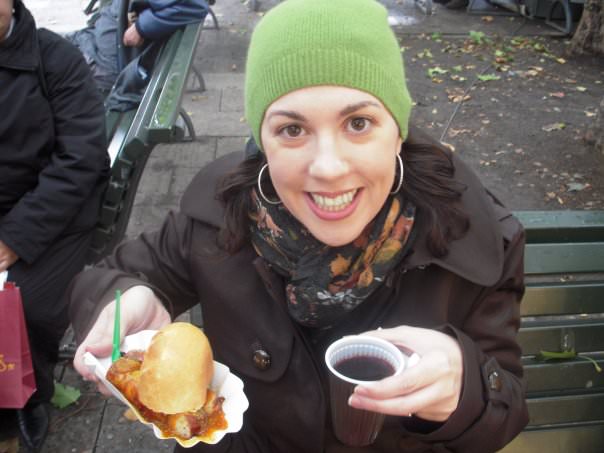 Currywurst is a German national dish consisting of sliced, hot pork sausage (“wurst” in German) covered with a combination of ketchup (or tomato paste) mixed with curry. The entire dish is then sprinkled with curry powder and served with a crusty roll or fries. Don’t be fooled- the meat itself is not curried (as I had originally thought)- that’s what the sauce is for. The invention of currywurst dates back to 1949 and is attributed to Herta Heuwer, a restauranteur in Berlin’s Charlottenburg district. The idea came to her after she received ketchup and curry powder from British soldiers, and currywurst became an overnight sensation, thanks to the hungry blue collar inhabitants of her neighborhood.

Berlin loves its currywurst so much that in August 2009, the Currywurst Museum opened right next to Checkpoint Charlie. I’m kind of regretting not purchasing one of their “don’t worry, be curry” t-shirts.  Some of the city’s best currywurst can be found at Konnopke’s Imbiss (Schönhauser Allee 44a –near the U-bahn station) in Prenzlauerberg. 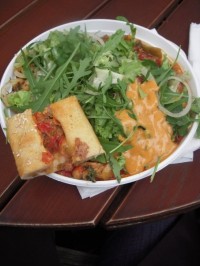 Turks make up the majority of Berlin’s immigrant population, so there is no shortage of fresh, delicious Turkish cuisine to be found throughout the city. I enjoyed a plate of kebabs (“kebap” in Turkish) covered with fresh greens and spiced sauce at the Mauerpark Flohmarkt (flea market). Another way to enjoy your kebab is in a thick pita with greens and yogurt sauce. This more portable option is called a döner kebap.

Glühwein
Of course, you’ll need something to wash down all of this street food goodness. Glühwein is a hot spiced red wine, typically prepared with cinnamon sticks, vanilla pods, cloves, orange peel and sugar. Fruit wines such as blueberry wine and cherry wine are sometimes used instead of grape wine. I enjoy mine “mit rum” (with a shot of rum). Glühwein is ubiquitous in Berlin, especially during the Christmas markets.

Very true, Robert. A crowd is a good sign at any street food vendor.

Not all currywursts are the same. to get the best ones, check them out first. Make sure the sausage has a crisp crust. The killer sign is if the place has a line and is packed.