Ever since I saw pictures of them in the National Geographic, I had dreamed of visiting the Lycian tombs at Fethye, Turkey. Fethiye is a traditional Turkish coastal market town occupying the site of ancient Telmessos. The town is built on a steep hillside that is crowned with the ruins of a Crusader’s castle once occupied by the Knights of Rhodes. The ancient rock tombs dominate the town. These pillar tombs, carved in the rock face, resemble small temples or ‘houses’ and were said to be modeled on the houses of the ancient Lycians who once inhabited this area. These peace loving people founded the Lycian Federation, the first democratic union known. 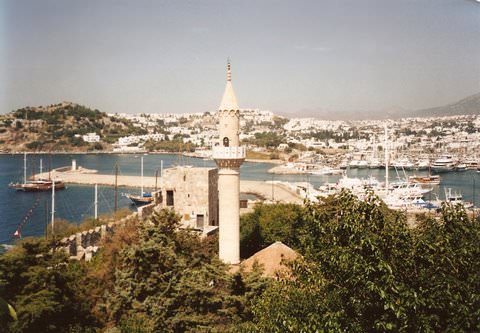 I arrived in Fethiye by bus from Bodrum. It wasn’t difficult to find good accommodations. Fethiye has a good selection of hostels, budget and  mid-range accommodations, although resorts are usually booked in advance. My pension was located on the edge of the hillside overlooking the sparkling bay. Before setting off to explore the town and the ruins, I relaxed on the Turkish style roof terrace and enjoyed a delicious traditional Turkish breakfast: boiled egg, cheese, tomato, olives, bread and honey and apple tea. 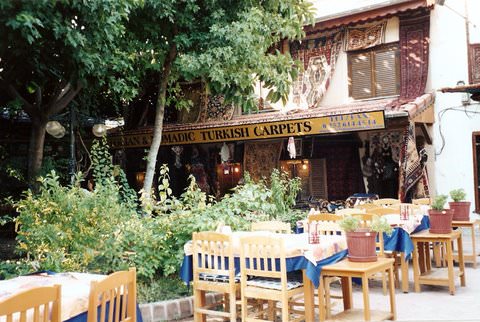 Although there are plenty of tourists about, most of them stay at the out-of-town resorts, so as I walk up the winding back-roads toward the tombs I meet only village folk and curious children who offer to show me the way. Finally, I reach my long-awaited destination, the stone steps that lead up the hillside to the tombs.  But can I ascend all those steps to reach them? I am already exhausted from the 40C heat and the long slope I’ve walked up from the town. High above me I can see the facades of the Doric-style temples that are cut into the cliff face of the mountain. I’ve waited years for this moment, but I’m almost ready to give up. 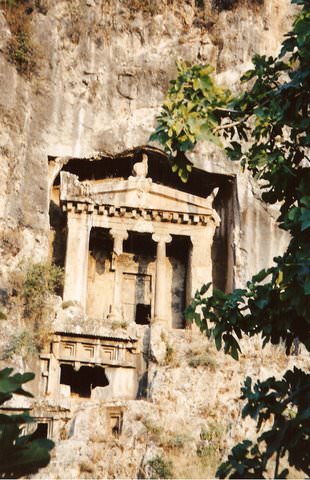 catch my breath and haul myself up the precarious two hundred steps. Finally, I am standing in front of the most predominant of these marvels, the Tomb of Amyntas, which dates to the 4th century B.C. The tomb chamber is empty and very small, but the magnificent view across the tiled rooftops of the village and town of Fethiye and the sparkling turquoise sea made the long trek up worth the effort. Entrance to the tombs is free. You just need a good set of legs and determination to climb up there.

There are many sarcophagi (stone coffins) in the town itself, and The Fethiye Museum is located off the main street in the centre of town. It displays many of the Lycian artifacts including pieces from the Bronze, Archaic, Hellenistc and Roman ages. The Museum is open Tuesdays to Sunday, 8.30 – 5.30; entry is $2.00.

The area around Fethiye is known for its beautiful beaches and they are easy to reach by the small Turkish min-buses called dolmus. I spent an afternoon at Belceky Beach located on a bay surrounded by pine-forested mountains. The sea here is absolutely gorgeous, clear turquoise and very warm. The nearby village of Oludeniz is located on a blue lagoon of the same name that means “Dead” or “Calm Sea”. But the sea there certainly wasn’t calm. Big rollers crashed in on the pebbly shore. It’s a popular resort with cafes and lines of colorful umbrellas and lots of tourists. Parasailers soar out over the sea. Behind the beach, a few brave people plummet off the cliff in what they call “tandem paragliding”. Oludeniz  is the starting point for the Lycian Way, Turkey’s only marked trekking route which winds along the coast to Antalaya. 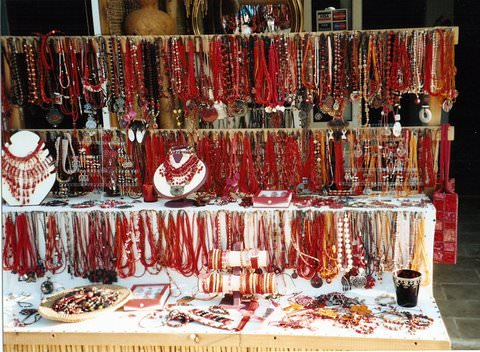 Beads for sale at the village Bazaar

At the village bazaar, I haggle with the jewelry sellers and watch a traditionally dressed lady rolling out gozleme, a kind of thin pancake, like a crepe but made with dough instead of batter and filled with shredded potato, cheese and onions. It is a delicious snack while waiting for the dolmus to take me back to Fethiye. 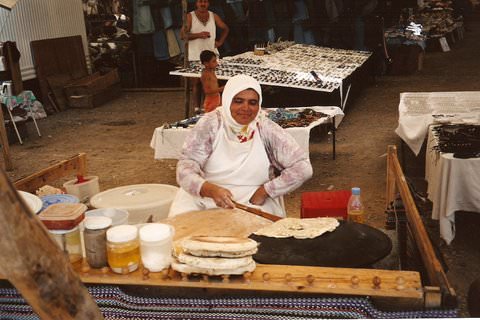 There are many spectacular places to explore around Fethiye including several more Lycian sites. I would have liked to have stayed longer, perhaps to go cruising down the Turquoise Coast. But that’s something I can look forward to on my next visit, for I will certainly return.