Nice may have its boardwalk along the deep blue sea and Monaco its glitzy casinos, but in between, perched high on a rocky outcrop, is the ancient village Èze. No place along the Cote d’ Azur can match the views from this enchanting site over the sea.

To get there from Nice, simply take bus #112 from Gare Routiere, the central bus station. For the price of 1 euro, this journey takes you along a snake-like street called the Middle Corniche (or Moyenne Corniche) that edges the Mediterranean. This route was made famous by a car-chase scene in Alfred Hitchcock’s To Catch a Thief, with Cary Grant and Grace Kelly. 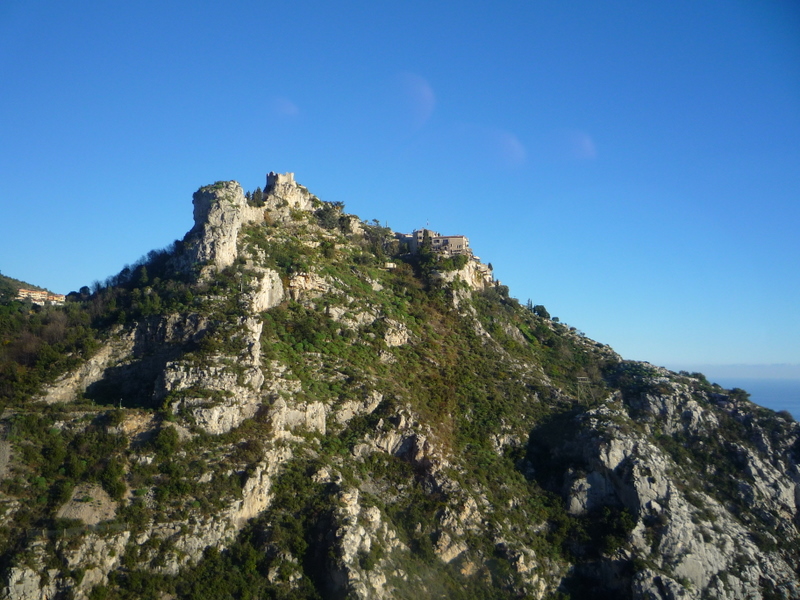 As the street wends and weaves, look out for the rocky outcrop up ahead. You very well may miss it. To repel marauding outsiders, the early settlers (evidence of a community here dates back to 2000 BC) must have wanted to make the village appear as nothing more than a cliff. This didn’t quite work, as the village has a long history of invaders: the Moors took over the Roman village in the year 900, and William of Provence took it from the Moors in 973. The Turkish and the Spanish ruled the village as well. There was even once a fortified castle here in the 12th century, but this was torn down in 1706. The village finally became part of France in 1860. 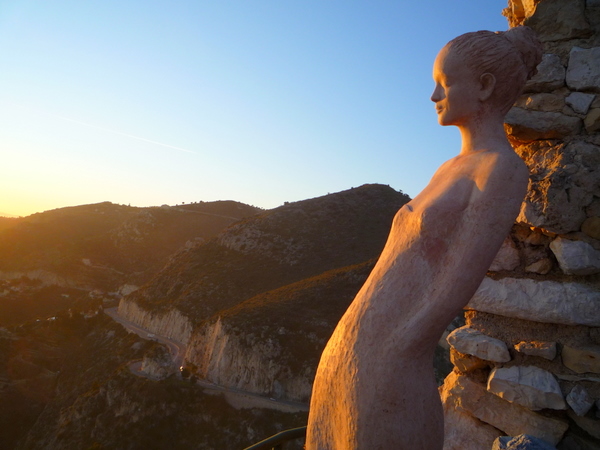 And now today, we can safely enjoy all the pleasures this village on a cliff has to offer. The bus lets you off at the bottom of the hill. It is a bit of a hike up to the top, but there are many treasures along the way. On your way up to the stone entrance to the village, admire to your left the golden-hued 18th-century Church of Our Lady of Assumption with its complementary blue clock. Keep walking and you may see tables displaying Provence spices, soap, and jewelry. When you reach the old gate to the village—which Redbeard with his Franco-Turkish troops burst through in 1543—a treasure trove of shops, restaurants, cafes, and hotels truly awaits. Be warned that this is a touristy village, but there is so much beauty here that you don’t have to be distracted by this fact. It seems as if nearly every space is filled; your senses are sure to become overloaded as you pass an artisanal shop selling wooden masks and bowls, a “window” carved out of the stone looking out over the countryside and sea below, flowering vines draping over the walls, elegant stained-glass lanterns, and cracked wooden doors hinged with iron plates up high in the center of a wall. The “roads” are mighty narrow, which lends to the feeling of being overwhelmed. 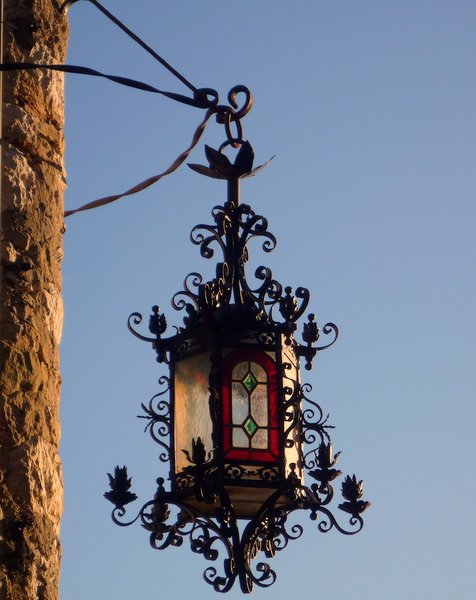 To experience the true beauty of Eze, I strongly recommend you show up about an hour before sunset. Because the walls are so high, the roads are cavernous and dark, but to see the light hitting the upper walls in contrast is a tremendously dramatic sight. Around sunset this light is even more dramatic.

You may be tempted to stop at the Château Eza, whose medieval-styled sign invites you to see their panoramic view of the Cote d’ Azur. While they do have a lovely terrace, unless you want to spend several euro on two cups of coffee, save your money and keep walking up: there is a garden paradise waiting up top. (If you are really wanting a coffee or even lunch, a bit further up is Le Cactus, a perfectly pleasant café with outdoor tables but not much of a view.) 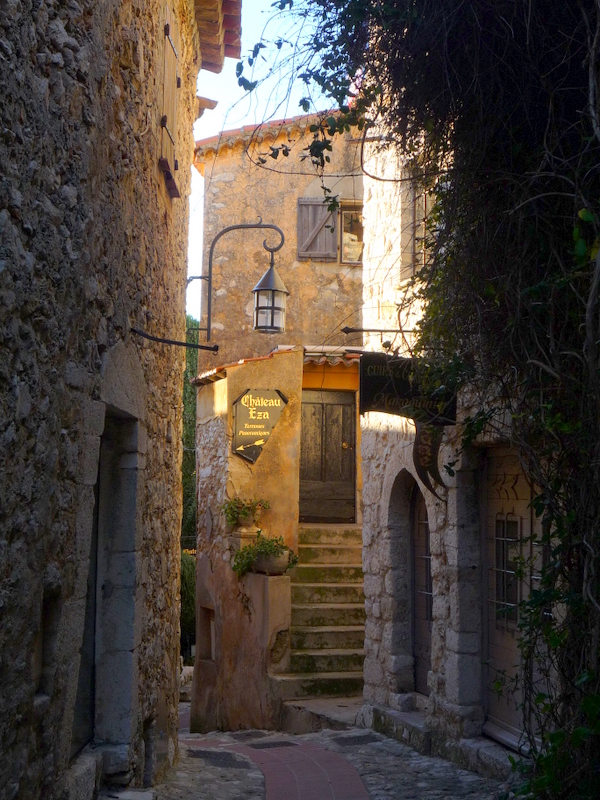 A street in Eze

The peak of the Èze experience is Le Jardins Exotiques, the panoramic garden at the very top of the village. We paid only 5 euro for two (half price) because the garden was closing half an hour later. And we couldn’t have picked a more magical time. In full light and view, finally, this garden atop Èze is 1400 feet above sea level and offers a true panorama of the Riviera. Constructed in 1949, the garden has over 400 species of exotic plants, including cacti, aloe, and agave. Dotted among the spiky green flora are lovely minimalist sculptures of women, each accompanied by a short poem on a plaque. At the very top is a large terrace that overlooks all: the sea, the curving road you took to get here, the surrounding countryside below and behind you. Two perfectly placed sculptures look out over the sea, catching the most magnificent light—again, at sunset. 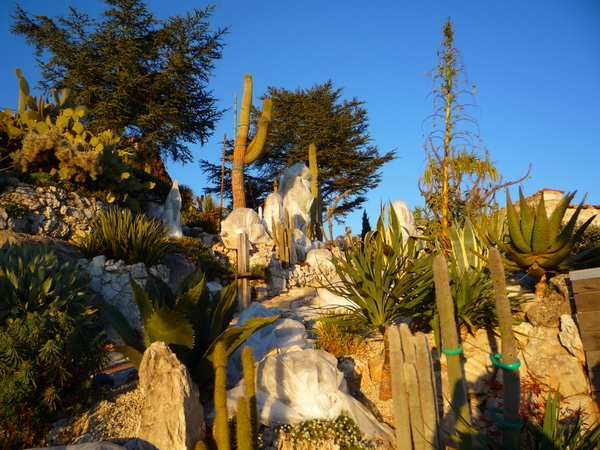 The woman who sold us our tickets gently scolded us to leave at 5:10, but we were reluctant. The sun had just about set and we didn’t want to miss a moment. I assure you, if you ever make it to Èze, you won’t want to, either.

My Favorite Foods of Europe

[…] of France has to be the fabulous finale to a ten-course feast at a beautiful beachside wedding in Èze. A series of sharing platters at Anjuna Plage Privee culminated in the cutting of the traditional […]