Whether at the Jardim Zoológico, the Jardim Botânico da Universidade de Lisboa, or the Parque das Nações and its nearby Oceanário de Lisboa, a wide variety of plants and animals can be found thriving in Lisbon’s warm Mediterranean climate made mild by the Gulf  Stream. Anyone looking for respite from the busier parts of the city should seek these sites. 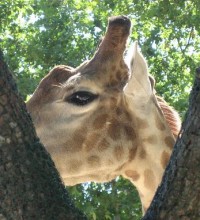 This renowned zoo has changed greatly over the more than 100 years since its establishment in 1884. Originally a spectacle—the first to house exotic plants and animals in all of the Iberian Peninsula—, the zoo languished for many years in the mid-20th century due to a lack of funding and antiquated enclosures. Today, however, the Jardim Zoológico has regained much of its initial glory with over 2,000 animals, updated habitats, and several expansions. To find the zoo, take Lisbon’s Linha Azul (Blue Line) to the Jardim Zoológico Station.

Once inside, a good first (or last) stop is the Cable Car, a system of open, two-person gondolas suspended on cables above the zoo. The 20-minute round trip offers unique views from directly over the habitats of tigers, lions, hippopotami, and several other animals. At its apex, riders can see downtown Lisbon, the nearby gardens, and elsewhere for miles. For children, another main attraction is the zoo’s pirate-themed aquatic show featuring the acrobatics of dolphins and sea lions. The zoo also hosts a Teatrinho da Natureza (Little Theatre of Nature) with bird shows and a Quintinha (Little Farm) that houses domestic, rural animals in a semi-open environment.

When two professors laid out this 10-acre garden for use by the scientific community in the mid-19th century, Europe considered it one of its finest. Today, nearly hidden from public view, many locals have never visited it. Among the garden’s more than 18,000 carefully labeled species of plants, it’s unlikely you will find many other wanderers, making this one of the best and cheapest escapes within the city. It may not fit with the hustle of most tourist schedules, but if you have the time I recommend spending an afternoon in the garden with lunch and a notebook, sketchbook, camera, or what have you. To find the Jardim Botânico da Universidade de Lisboa, take the Linha Amarela (Yellow Line) to Rato Station and walk south along the Rua da Escola Politécnica. The garden will be on your left. 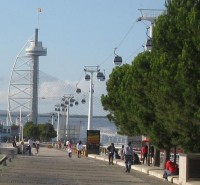 Still referred to as “Expo” by local residents, this area along the Tagus estuary was built up and transformed for Portugal’s Expo ’98 World Exhibition. The several shops, restaurants, and bars nearby are removed from the river’s edge and easily avoidable if you stick to the water gardens, greens, and piers of the Parque das Nações. Major sites include one of the world’s largest aquariums, the Oceanário de Lisboa, and the Torre Vasco da Gama (Vasco da Gama Tower) designed to resemble the sail of a caravel and equipped with a panoramic observation deck. Unfortunately, the tower is being restructured into a luxury hotel and may or may not be open to the public when you visit. Nonetheless, an excellent way to get a good view of the park and beyond is to take a ride in one of the suspended cable cars that carries passengers parallel to the waterfront. To get to the Parque das Nações take the Linha Vermelha (Red Line) to Oriente Station (a futuristic marvel in itself).

Also take a look at these helpful guides about Lisbon:

Is the Lisbon Card Worth It?

Things to Do in Lisbon