Limestone towers, capped like gnome’s hats, cast long shadows over the streets.  A dry sun bakes the village. The men gather in the cool of cafes to smoke and drink endless cups of black tea. Up on the hill, three women in white headscarves hold baskets of laundry on their hips, stooping to shoo away a stray dog. 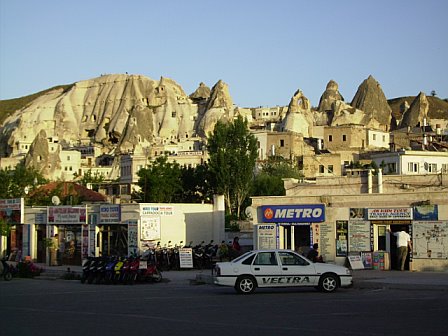 Small and sleepy, Göreme is the unlikely gateway to inner Turkey. The arid Cappadocia region has been a cultural crossroads for thousands of years. Early Christian monks migrated here; the Spice Road brought traders from Asia; Arab conquerors swept through.  In addition to its rich history, Cappadocia is also a geological wonderland. Soft sedimentary rock has eroded into so-called fairy chimneys: tall, conical formations sometimes topped with teetering boulders like mushroom caps. People have hollowed out these chimneys over the course of centuries to make caves, many of which are still used. Because of its unique landscape, Cappadocia is fast becoming an adventure travel destination. 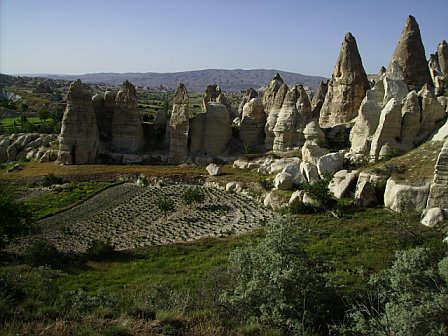 A highlight of the region is the Göreme Open Air Museum. A short walk from town, the complex was once a monastery hewn entirely from the rock. It showcases an astounding network of chapels – some featuring gorgeous Byzantine frescoes – dining rooms, sleeping chambers, and even wine storage (open daily 8-5, $9). 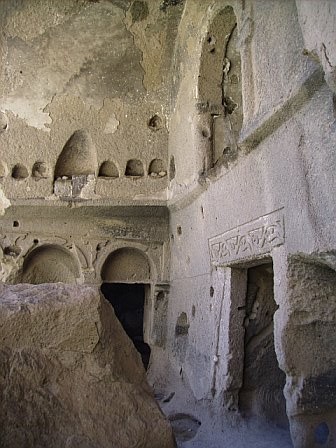 Our Göreme guide was a Dalmatian named Spotty.  Spotty belonged to the owner of Kose Pension, a lovely and hospitable guest house ($20-30 for a private room). Visitors to Göreme can stay in a fairy chimney instead, but the cave rooms were too damp for our taste. Spotty met us each morning at Kose’s gate, wagging his tail. His favorite place to wander was Rose Valley. We hiked beneath the shadows of cliffs where, thousands of years ago, Byzantine monks cut their hermitages out of the rock. Subsistence farmers still plow the earth alongside the trail. We took a break from the sun under a tree and drank bitter black tea with two old Turkish guides. 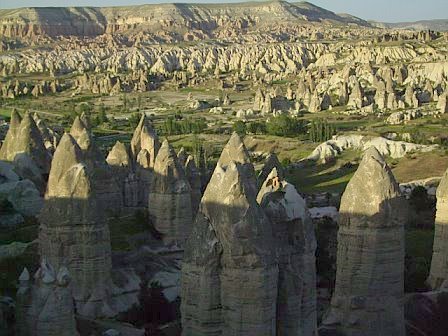 Cappadocia’s residents have picked up with the increase in tourism, and many offer organized tours. Bus tours are an easy way to see the countryside. Buses stop for hikes in the lush Ihlara Gorge, lunch by a river, and tours of ancient cities. Hot-air balloon tours cost nearly $200, but sipping champagne while the sun rises is a rare opportunity. The more adventurous can rent mountain bikes in town, and spend an afternoon cycling up ancient dirt roads. 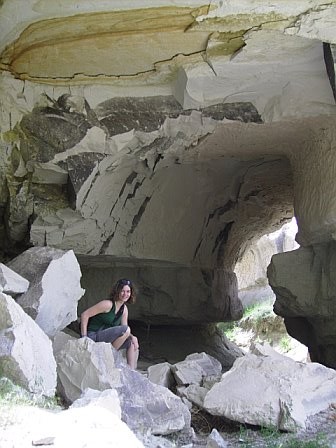 Visiting a cave outside Goreme

After a day of dusty exploring, we returned to town. The wine industry is growing in the region, and local restaurants proudly pour Cappadocia’s dry whites to accompany baked eggplant, lamb, stewed tomato and fragrant spices. 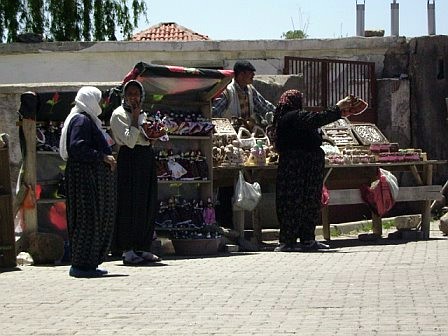 Like any rural village, Göreme closes down early, but we did find a hookah bar off the main street. In an atmospheric cellar, we met travelers from around the world, several of whom were back for the second or third trip. Cappadocia’s strange and unique landscape lingers with them, and draws them back.