From the rooftop patio of the Palais Des Remparts hotel in Essaouira, Morocco, I stare out over the roiling Atlantic. Cirrus clouds and seagulls hover in the dazzling azure sky thanks to a brackish wind. Below me medieval-looking cannons protrude from the city’s ramparts that inspired this hotel’s name. I’m tempted to curl up with a good book in one of the comfy lounge chairs but right now Essaouira demands to be explored. 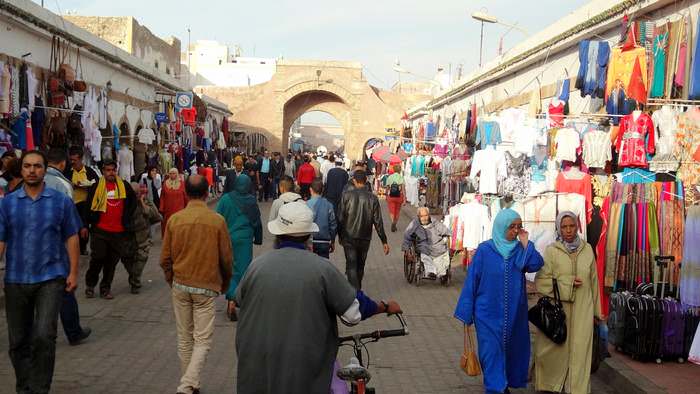 Strolling the main thoroughfare of Essaouira

Outside my hotel I stroll past whitewashed blue-shuttered buildings. When I enter the nearby medina, the original walled city, it’s obvious I’ve found this town’s spiritual and commercial heart. French-influenced plazas, whitewashed arches, and donkey-powered avocado carts make it perfect for wandering. Moroccan women clad in bright blue robes called djellabas traipse the cobblestone pathways alongside tourists in shorts and flip-flops. They all haggle for cactus pears and textiles with street vendors that line the cobbled walkways, and chat over robust Moroccan coffee at sidewalk cafes. The lilting tempo of Moroccan folk music spills from open doorways. 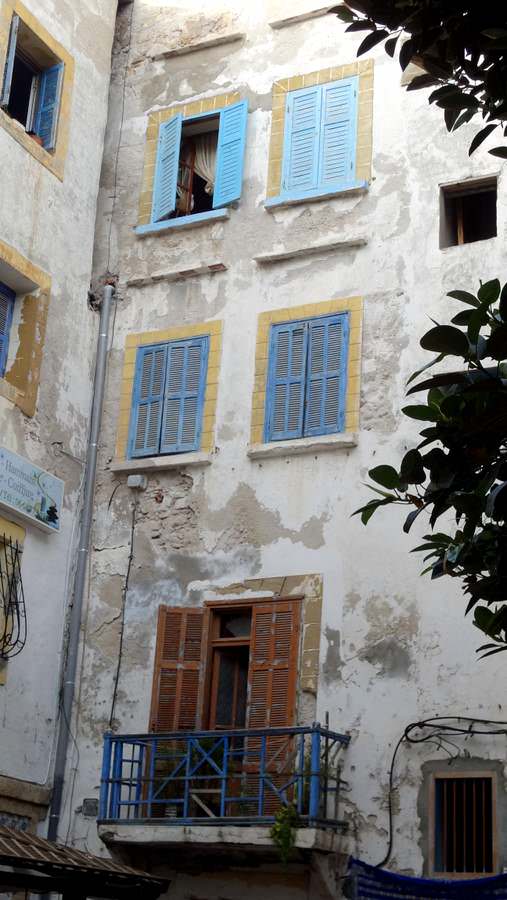 People have been drawn to this site since the 8th Century, when traders came to barter for slaves, ostrich feathers and ivory, but it wasn’t until the 1760s that Essaouira was established and a network of stone walls was built. The medina was designed by a French architect on orders from Sultan Sidi Mohammed Ben Abdullah, who wanted to build a grand city that would rival the key port of Agadir to the south. For years the settlement prospered, but when the French arrived in 1912 and moved the main port north to Casablanca, the town suffered. During the 1960s it experienced a minor renaissance when it became a hippie retreat and a favorite hangout of Jimi Hendrix and Cat Stevens.

Today it’s recognized throughout West Africa as a hub for arts, crafts, and music, though it’s somewhat off the tourist radar. I’m thankful Essaouira was on my agenda, as it radiates a laid-back vibe not easily found in today’s modern, hectic Morocco. 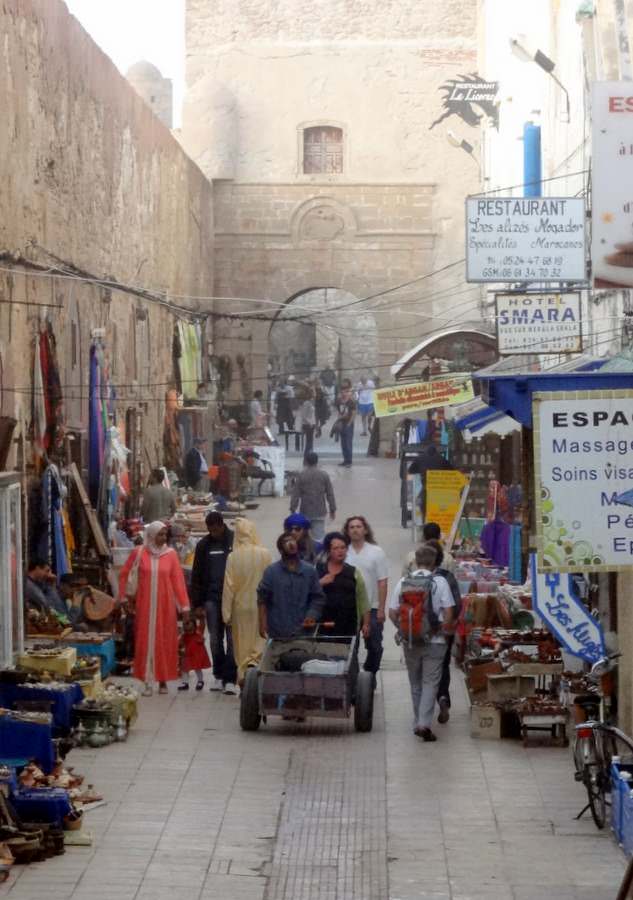 Rue de la Skala near the city walls in Essaouira

Somehow I end up on Rue Mohammed Ben Abdullah, which is more or less the main thoroughfare. The range of goods here is not quite as extensive as in Marrakesh or Fez but prices are lower and the vendors are a whole lot less pushy. Stores display platters, bowls, and chess sets carved from a local mahogany-like hardwood called thuya. In the bustling spice market woven baskets decorated with lavender and cobalt geometric designs hang above aromatic mounds of saffron, paprika, and cinnamon. Persistent shopkeepers implore me to check out their carpets, slippers, painted teapots, perfumes, and cactus-seed oils.

Mysterious shaded alleyways lead off the principal roads to hole-in-the-wall shops cluttered with antique silver jewelry, goatskin lamps, pewter serving platters, dusty goblets, and ancient daggers. Many of the proprietors seem more interested in scanning the news headlines than in making a sale. 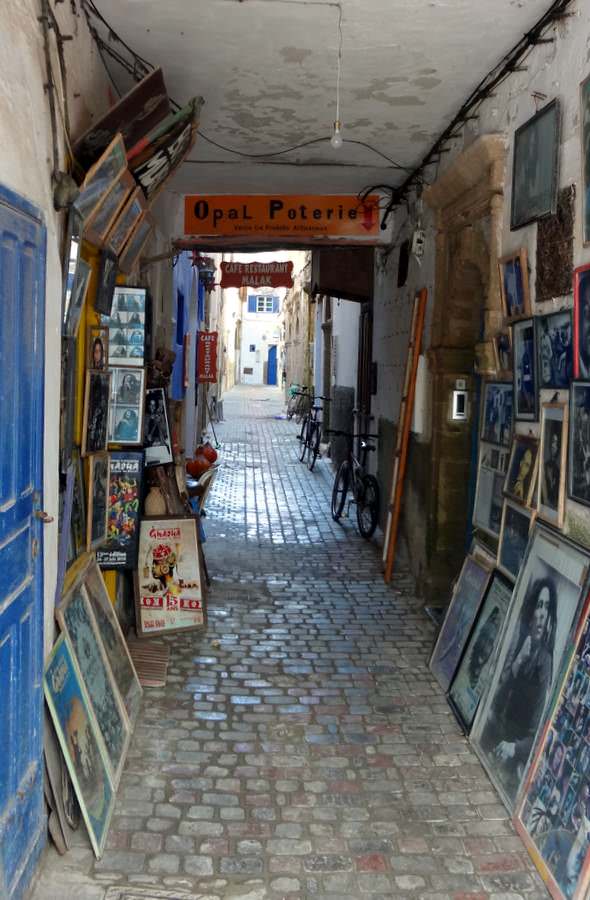 One of many galleries in Essaouira

Several blocks north, the Mellah district is a marked contrast to the rest of the medina. After Essaouira was built in the late 1700s the sultan invited Jewish merchants to set up shop in his showpiece city. The Mellah became its Jewish quarter, and prosperous entrepreneurs constructed elaborate mansions of up to twenty rooms. Upon the end of the French protectorate and the creation of Israel most of the Jews emigrated and the Mellah fell into neglect. Once majestic homes are now occupied by squatters, while others sit empty. The Star of David is still visible over the doorways of some of the crumbling buildings.

After the somberness of the Mellah, I need some caffeine stimulation. I head down to Place Moulay Hassan, the town’s main plaza, where I park myself outside the Gelateria Dolcefreddo and order a glass of nous-nous (half espresso, half steamed milk.) The plaza connects the medina with the town’s port and is obviously a social and commercial focal point. Well-heeled businessmen discuss commerce over lattes, while wrinkled matriarchs in cream-coloured djellabas share gossip in hushed tones. A young musician struts by holding his gimbri, which is sort of a square-shaped, three-stringed Moroccan guitar, except that a gimbri’s strings are made of goat gut and its front is covered in camel skin. 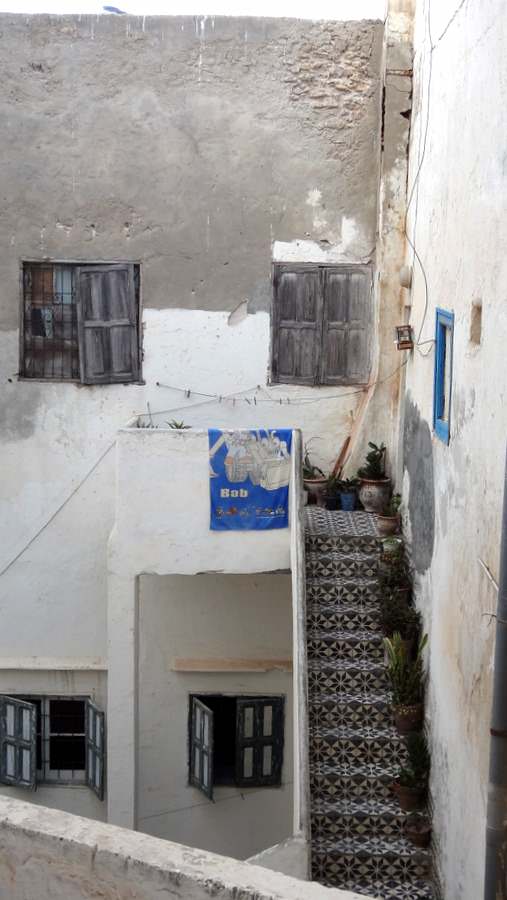 A typical home in the Medina

Watching all this local theatre is enjoyable, but I’m constantly assailed by an army of persistent shoeshine boys who seem undeterred by the fact that I’m wearing sandals. After a half hour I’ve had enough and decide to follow some disheveled fishermen down to the docks at the town’s southwest corner.

It’s late afternoon and the local fishing fleet is slowly drifting back into harbour. Trawlers bob alongside the quay, while other boats in dry dock are being painted vivid shades of orange, green, and blue. Vendors hawk the daily catch of sardines and calamari under the watchful eye of some scrawny cats. The pungent scent of grilled fish rubbed with paprika, cumin, and coriander mingles tantalizingly with the salty tang of ocean air.

From the port I follow the shoreline to the ramparts of the Skala de la Ville that I had observed from my hotel this morning. This impressive bastion was constructed to guard the town’s northern cliffs. I ascend a set of stairs up to another rampart where locals and tourists have gathered to view the approaching sunset. Fearless young Moroccan dudes are perched dangerously atop 19th Century cannons that jut from the parapets over the crashing waves far below. 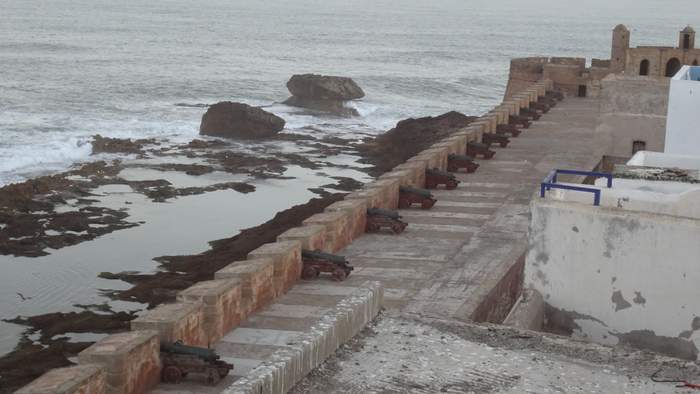 I opt to watch the day’s end from the circular North Bastion citadel a short distance away, where I’m treated to an extraordinary orange-red sunset spectacle. No wonder Orson Welles chose to open his 1952 film version of Othello with a dramatic panning shot from the Essaouira ramparts.

I’m nearly spent from all the day’s sightseeing but before I head back to my hotel I have some unfinished business. I re-trace my steps to a small boutique I had passed earlier in the day, where a gorgeous multi-coloured carpet still hangs outside. Luckily, the boutique is still open. When I inquire about the price the affable shop owner, Mohammed, insists in true Moroccan fashion that we first share a steaming pot of sweet mint tea. So for the next half hour we kneel on the floor, sip tea, and swap information. It turns out he lives right here in the shop with his younger brother, indicating two rolled-up mats pushed into a corner where they sleep. The tiny hotplate he brewed our tea on serves as their kitchen. He says that whatever money they make they send home to their poor family, who reside in a village in the Sahara Desert.

On that note, Mohammed produces a pen and paper. After a dramatic pause, he writes down a number. “This, my friend,” he explains, “is my ask price for your carpet.” He then hands me the pen and paper. “Please, now you give your price.”

I look at the paper. He has written 7000 Moroccan Dirhams, which is roughly equivalent to 700 US Dollars. I wait a moment, write 200 US Dollars, and then hand him back the paper.

He chuckles nervously. “We are a little bit in disagreement, my friend,” and then quickly adds, “But this is no problem.” When he returns the paper I see he has dropped his asking price by 100 dollars.

We continue this dance for several minutes before we finally settle on a price of 300 US Dollars. He seems pleased, and I’m thrilled to get a beautiful handmade five by seven foot carpet for a fraction of what I would pay at home.

As I prepare to depart with my purchase, Mohammed shakes my hand vigorously. “Please, my friend,” he urges, “We need foreign people to come here for our economy. Please tell people from your home country to come to Essaouira.”

“That, my friend,” I assure him, “is something you don’t have to worry about.”

If you go to Essaouira

easyJet offers direct flights from Luton airport in London to Essaouira. Many visitors arrive via car, bus, or taxi, from Marrakech, which is a three hour drive from the east. Several European airlines fly direct to Marrakech, including Ryanair and British Airways.

Summer is the busiest season, when daytime highs can exceed 30 degrees Celsius. Autumn is an ideal time to visit as temperatures are balmier, and the city is not as crowded.

Essaouira’s small size means that most hotels are only a few minutes walk from the harbour. There are big chain hotels like Sofitel, but the medina offers many exceptional riads. A riad is a house with an open central courtyard that has been converted into a hotel.

I stayed in the Palais Des Remparts, 18 rue Ibnou Rochd. Rooms come with extra touches like inlaid Moroccan tiles and sunken bathtubs. The charming rooftop patio may just offer the best ocean view in the city.

The legendary Villa Maroc , 10 rue Abdellah Ben Yassin is Morocco’s first riad hotel. Rooms are spread over three charming blue and white buildings. There is a gorgeous roof terrace, as well as a small spa.

Centrally located at Place Moulay Hassan, Café Resto Le Taros has a restaurant that serves up generous Moroccan dishes, as well as a bar, gallery, and library. The rooftop patio is the place to hang out after the sun goes down. A string of food stalls are open for lunch near the port entrance, offering simple, well prepared seafood at reasonable fixed prices.

Each June up to half a million people converge on Essaouira to attend the Gnaoua World Music Festival. Since 1998 it has celebrated the music and arts of the Gnaoua, who are a brotherhood of mystics. In recent years the festival has added additional musical genres, such as jazz, blues, and reggae. The Gnaoua are instantly recognizable in their multi-colored robes and tasseled hats. Needless to say, those planning to attend should book months ahead.

Written by and photos by guest contributor, Rick Neal.

Rick’s travel career began as a college student when he impulsively signed up for an international student exchange program and spent the summer working in Turkey. Since then, his wanderlust has taken him to Central and South America, Vietnam, England, Morocco, and China, where he spent an unforgettable year teaching English. Rick makes his home in Vancouver, Canada, where he writes for various travel publications.