If you’re visiting London during July, August or September, and you enjoy live orchestral music and want a taste of a Great British tradition, then attending a Proms concert at the Royal Albert Hall is essential.

The Proms take place each year in London, from July through to September, and are a series of over 70 concerts held at the iconic Royal Albert Hall. The Proms have been in existence for over 100 years (115 in 2009) and were first thought up by Robert Newman in 1894. He enlisted the help of Mr Henry Wood, a young musician and conductor, and together they got the first Promenade Concert off the ground in August 1895.

The bust of Henry Wood is annually placed in front of the organ at the Royal Albert Hall and is honoured on the famous Last Night of the Proms, when a wreath is ceremoniously draped around it.

A wide range of music is performed at the Proms, from classical favourites, to new compositions, and the concerts are suitable for a wide range of ages. There are even some specific Prom concerts aimed at families, which offer a great music introduction for children. Many of the concerts are televised by the BBC, and are available to listeners on Radio 3 as well.

The Last Night of the Proms is a major event on the calendar. The second half of the concert is devoted to traditional and patriotic music, with much Union Jack flag waving, singing and hooters (quite a contrast to the demure and sensible state in which the rest of the concerts are performed). Tickets for the Last Night are in much demand, but there are also live and linked Last Night of the Proms events that take place at outdoor venues around the UK, which are a great alternative if you can’t get to the big event itself (or you could watch all the action on TV). 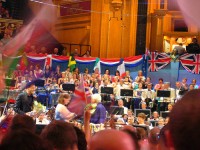 If you know you’re going to be in London during the Proms, then tickets can be purchased in advance. But if you just happen to be there, or find yourself with free time one evening, then there’s still a good chance to get to a concert and experience one of the most traditional elements of the Proms.

The tradition of Promming has long been a part of the annual Proms concerts and refers to the way in which standing room only tickets are available for the concerts. In fact, there are up to 1,400 standing places available at each Prom and tickets cost a mere £5 each – or even less if you purchase a Weekend Promming Pass or a Season Ticket.

The main and most well known standing area is in the arena, which is located directly in front of the stage in the heart of the Albert Hall. It’s here that you’ll be in the midst of all the action and right up close and personal with the orchestra. In addition, there are some standing areas up in the gallery, the area that runs around the top of the hall.

If you want to experience Promming for yourself, then over 500 standing, unreserved tickets for the arena and gallery areas go on sale 30 minutes before the doors open each night. If there’s a particular concert you want to hear, or it’s likely to be a popular choice, then you’ll need to queue early to get the chance of a ticket (and all tickets have to bought with cash).

There is a lot of standing involved, so you’ll need to wear comfy shoes. Being down in the arena, or in the gallery, with a host of other Prommers is a great experience and one you’re sure to remember. In fact, dedicated Prommers claim that it’s the only way to properly experience the Proms.