Before departing New York, I joke that I am going to Italy to get my Eat Pray Love on—but as soon as I step off the vaporetto (water taxi) that brings me from Marco Polo Airport, I decide these first few days in Venice will be focused on eating. Everything looks so amazingly good that 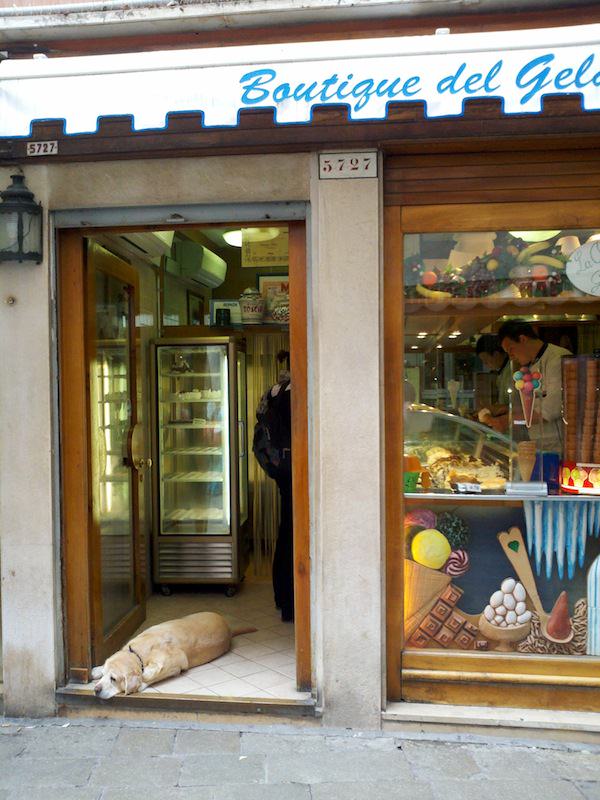 figuring out what to eat nearly…consumes me. What do you do when your biggest decision of the day is what flavor of gelato to order?…You get a second scoop.

Before coming to Venice, I never considered myself to have much of a sweet tooth. But then I have my first Venetian gelato—amaretto which means almond—and the experience is…transforming.

Like any addiction, once you’ve had true Italian gelato, you pretty much want it all the time. To really mess with your willpower, there’s at minimum one gelateria per block. Not infrequently there are two situated side-by-side, both apparently thriving. A single scoop runs from 1.30 to 1.50 Euros. The saving grace is that the portion size follows European standards, which amounts to about half of an American serving.

That, of course, means I can totally justify having due—two! 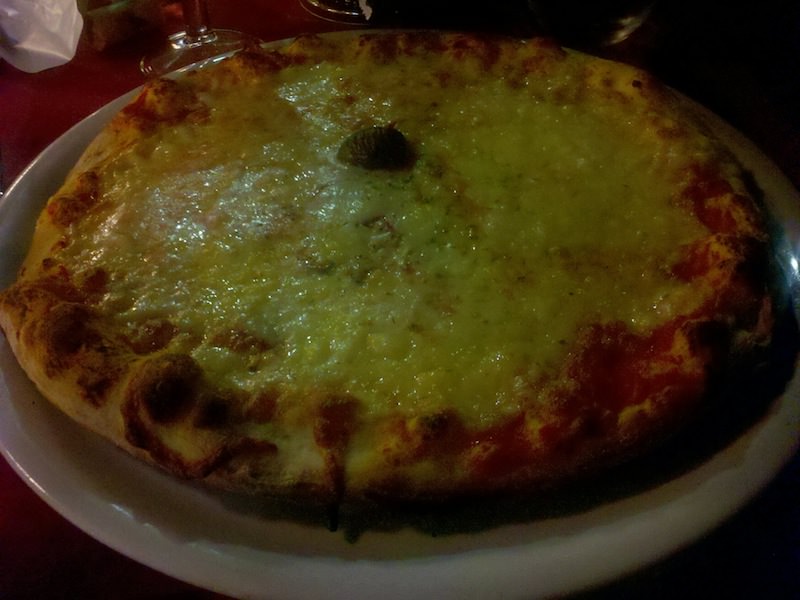 And then there is the pizza. Mama mia, the pizza! In The States, inhaling a whole pizza would count as a Kirstie Allie moment, the scraping bottom binge prelude to signing up for Weight Watchers or Jenny Craig, but here no one looks at you askance. In point, everyone is ordering their own pizzas, which are not “personal pan” size but actual whole pizza size. And what’s brilliant about all this pizza scarfing, inspiring really, is that nearly no one in Venice is overweight. Apparently once you set foot on Italian soil, calories don’t count unless you count them. 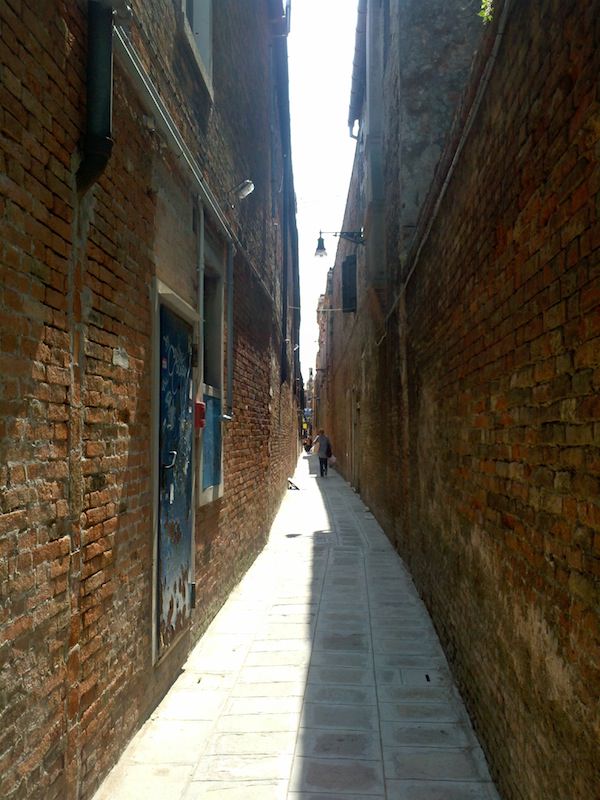 On my first night in Venice, I decide to test drive this theory for myself. After a day spent strolling along the Grand Canal, taking in the majesty of St. Mark’s Square, gazing into the shops selling elaborate masks and other Carnivale wear, and yes, having the requisite Bellini at Harry’s Bar, I decide on dinner at an unprepossessing little pizzeria in Campo Santa Maria Formosa, Venice’s Castello district.

The variety of pizzas listed on the very large menu of this very tiny place is staggering. Sticking to the K.I.S.S. Rule, I order a caprese pizza and settle in with my half-bottle of chianti. (Note: Few Venetian restaurants sell wine by the glass). The pizza arrives, huge and sizzling, the tomatoes so fresh I can all but smell the topsoil on them. I tuck in. This is my first pizza on Italian soil and yes, it is the hands down Best Pizza of My Life. Any puritanical thoughts of saving half or even a slice back fly away from my first bite on. Eating this pizza in anything less than its pristine, fresh out-of-the-oven state would be a culinary crime. 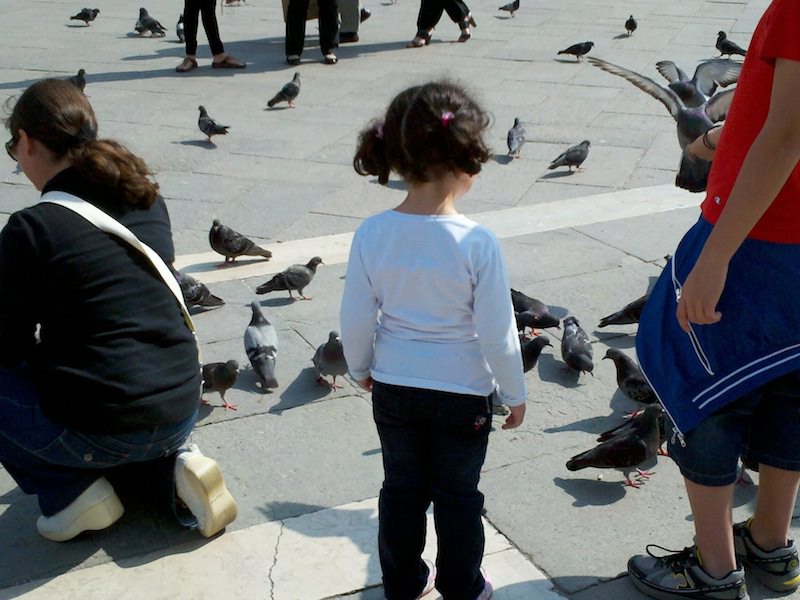 It doesn’t hurt that the waiter prefaced the taking of my order with, “Bonne sera, pretty, what can I do for you?”

If you’re a single woman of a certain age looking to get your flirt (back) on, Venice does not disappoint. Venetian men are generous with their compliments and if their chivalry has a decidedly sexual slant—and it does, oh how it does—who’s complaining? Even the Best Pizza of My Life tasted that much better seasoned with a smile and a compliment.

“Have a beautiful life,” he calls after me as I leave to head back to my hotel, the better part of my half bottle of wine tucked beneath my arm. 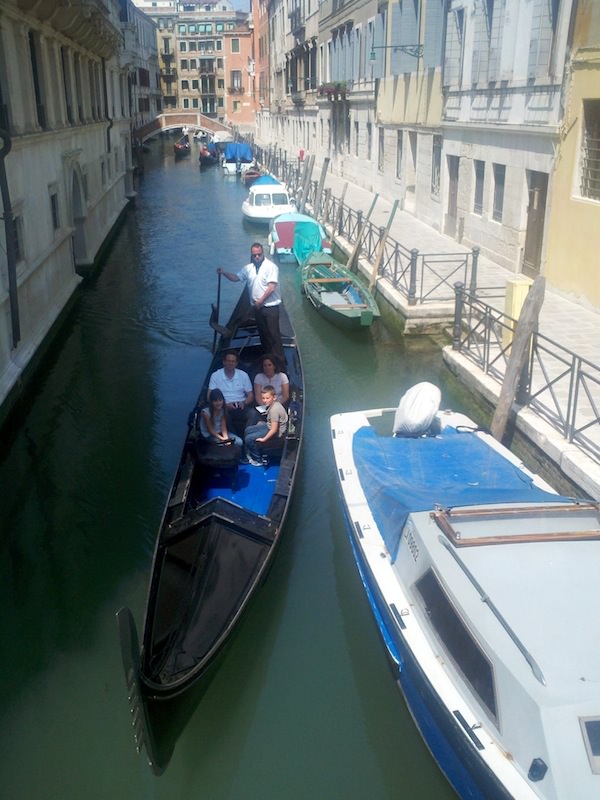 Wine is drunk at both lunch and dinner. Drunk, not guzzled. As a broad rule, Italians are sippers, not quaffers. A typical Venetian will nurse a glass of wine—what would be considered a half glass in the U.S.—throughout a meal. The selection of commercially available wines leans heavily on the regional. Northern Italy, including Venice, is best known for its whites, notably prosecco. In The States, prosecco has become synonymous with sparkling wine and indeed most of the prosecco I have in Venice is precisely that. Still, the name has to do with the grape, not the fizz. (“Secco” translates to “dry”). If you want your bubbles closer to champagne, order a spumante.

Northeast Italy is also home to grappa, a high alcohol (70-120 U.S. proof) grape-based pomace (the skins and seeds left over from the grape pressing) frequently served after meals as a digestive. Bassano del Grappa, about a two hour drive north of Venice, is home to Nardini, the oldest producer of grappa in Italy.

Drinking and eating are not only basic bodily necessities but social occasions. Sitting down to a good meal at least once a day isn’t a decadent splurge but simply a sensible way of being. A proper meal is served in courses, typically an antipasto, a prima, a secondo, an insalate (salad comes at the end of the meal), espresso and dessert, and often, as the finale to dinner, a small glass of grappa. Taking cappuccino or any coffee with milk after 3:00PM, the official start of “evening,” is something no true Italian will ever do, a faux-pas rooted in the sensibility that dairy taken late in the day interferes with optimal digestion. 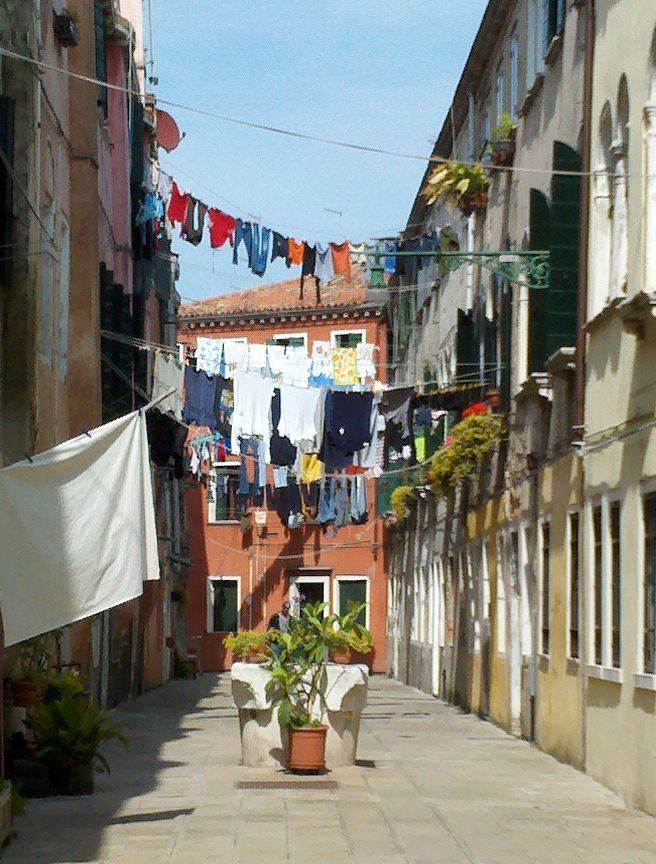 Another big no-no: cell phones. A Blackberry or iPhone set out on a restaurant table is a rare sight. To ignore your lunch or dinner companions in favor of texting or talking to others not present is seen as unpardonably rude. Huzzah! And no matter how young and hip you are, no one—repeat, no one—walks while texting. While I do spot some Venetians chatting on their cells while walking, shouting one’s personal business to the skies is definitely not done here.

Amidst all the abundance, there is a distinct scarcity of stress in Venice. They don’t call it The Most Serene Republic for nothing. If you’re anything like me, you rely on a certain baseline level of stress simply to hold you up. By the end of my four days, I am positively limp from the lack of anxiety.

Along with my daily infusion of stress, there are other things I miss while in Venice. Like the ridiculously large—gigantico—American coffees a la Starbucks readily available in paper to-go cups. There is precious little “to go” here in Venice. Unlike New York, indeed most of Unitas Statis, Venetians wouldn’t dream of drinking their coffee, let alone eating, on the run.

But then no one is doing much running. Venice is a walking culture. Actually, it’s a strolling culture. After a few token laps through the Giardini Pubblici (Public Garden), I decide to power-down the Energizer battery and slip into stride with everyone else. Sure, I’d inhaled an entire pizza the night before. Sure I was packing enough pasta 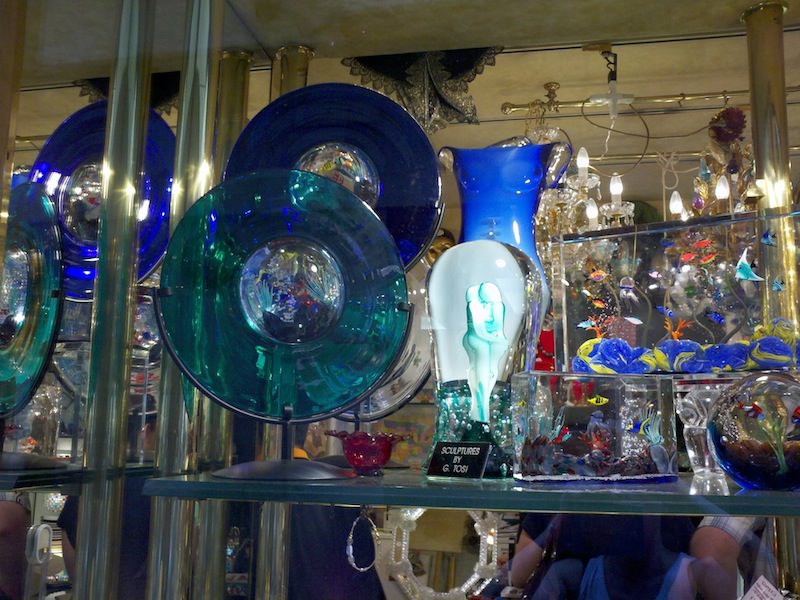 to fuel a daily marathon. Sure, my gelato intake was escalating to a two scoop a day habit. And yet running in Venice feels so very…wrong.

As to my theory on the calorie dissolving properties of standing on Italian soil, I end my four days in Venice with no real empirical data. Still, my observations, anecdotal and self-serving though they arguably are, have me considering this:

Maybe, just maybe, it isn’t food that’s making us Americans fat. Maybe it’s stressing about food—all the calorie counting and triglyceride monitoring, the guilty tallying of points and grams—that’s bringing our spirits down and our jeans’ sizes up.

If that’s even remotely true, then Venice may just be paradise on earth.

I don’t know about you, but I’m having another gelato while I think about it.

Written by and photos by Hope Tarr for EuropeUpClose.com

Great article. Now I want to go to  Italy again. While I don't want to go do Jenny Craig it would be worth it for a two week binge in on some authentic Pizza.

I was indeed blessed with beautiful, sunshiny weather the whole trip through. And I so loved all the clotheslines. They were as much a part of the Venice vibe as all the colorful flowers.

I whole-heartedly agree that the stress of counting calories is probably adding to our weight issues. The two times I was in venice I didn't think about calories at all (I don't at home that much either). And actually, with a strolling culture, comes natural exercise. We walked everywhere. For hours on end, only stopping to eat and have a mid-day gelato (that was after the mid-morning gelato mind you). It's heaven. The pace is so much slower. They really know what they are doing over there. On a side note- I swear I have a picture of that same laundry in that same alley from 2001. Nice to see the city hasn't changed all that much although you got a much sunnier day than I did.

All this time I know you and yet I don't know, haven't a clue, that you have actual family in Italy. How could I not know this?

More importantly, when you go back for that visit, do you need an au pair?