It’s easy to see remnants from when Italy controlled Croatia’s Dalmatian Coast especially in Split and Sibenik. Both the Roman and the Venetian empires ruled along here. The food and architecture are 100% Mediterranean. The city of Split is located in the middle of Croatia’s huge coastline. It was built out of the ruins of a Roman palace… the retirement home of Emperor Diocletian. The walls from this giant palace still compose portions of the city. I toured the subterranean floors this morning. 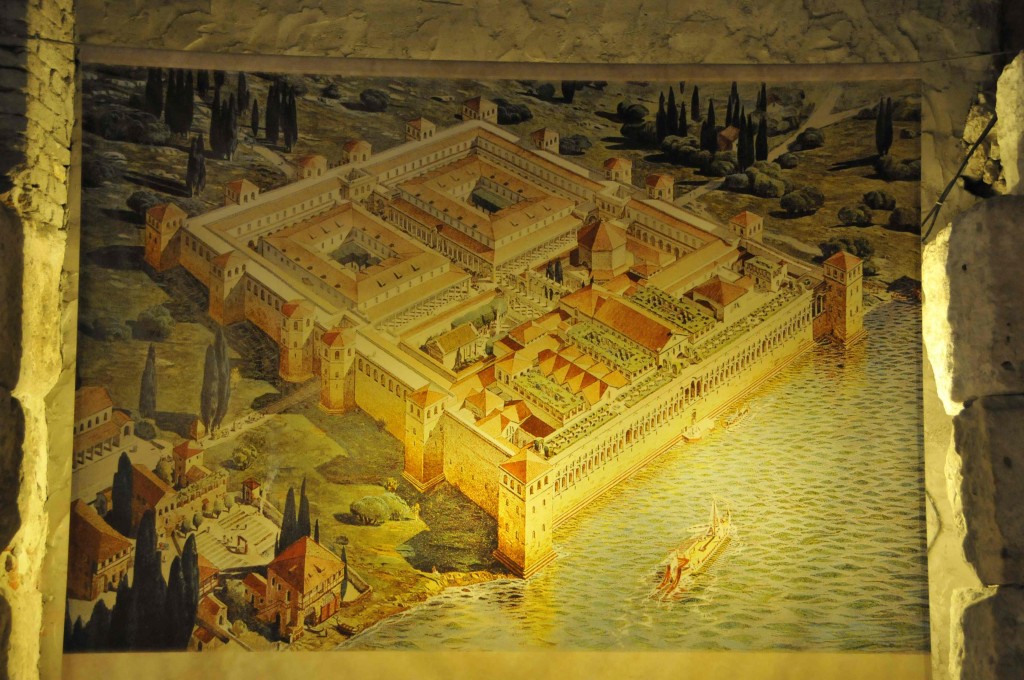 In local dialect, the name “Split” means witch-hazel, and each spring, when the shrub blooms it fills the city with its scent. The local saying – Zene de opiesne licek cuite dumistne – warns that “women are very dangerous at this time,” because the locals believe witch-hazel is an aphrodisiac. (I was also told that small octopus is an aphrodisiac, as well as the crystals formed in aged Pag Sir cheese, and don’t even get me started on the oysters…). Split is easy to navigate, with plenty of cobblestone streets for getting purposefully lost, and it also has a handful of beaches.

Croatia’s Dalmatian Coast is all about fresh seafood, seasonal fruits and vegetables, and olive oils. Grilled fish is very common—usually sea bass, sea bream, or scorpion fish, the latter the most prized and expensive—and I learned to add a healthy pour of olive oil when eating it. I was served grilled sea bream at Sperun Restaurant, and the olive oil and already moist and salty sea bream complimented each other perfectly; the flavors just exploded (I definitely recommend trying this at home). “Fish must swim three times,” explained Zdravko Banovic, owner of the restaurant. “Once in the sea; once in olive oil, and once in wine.” His eyes twinkled as he took a large slug from his glass of white (100% Posip grape). 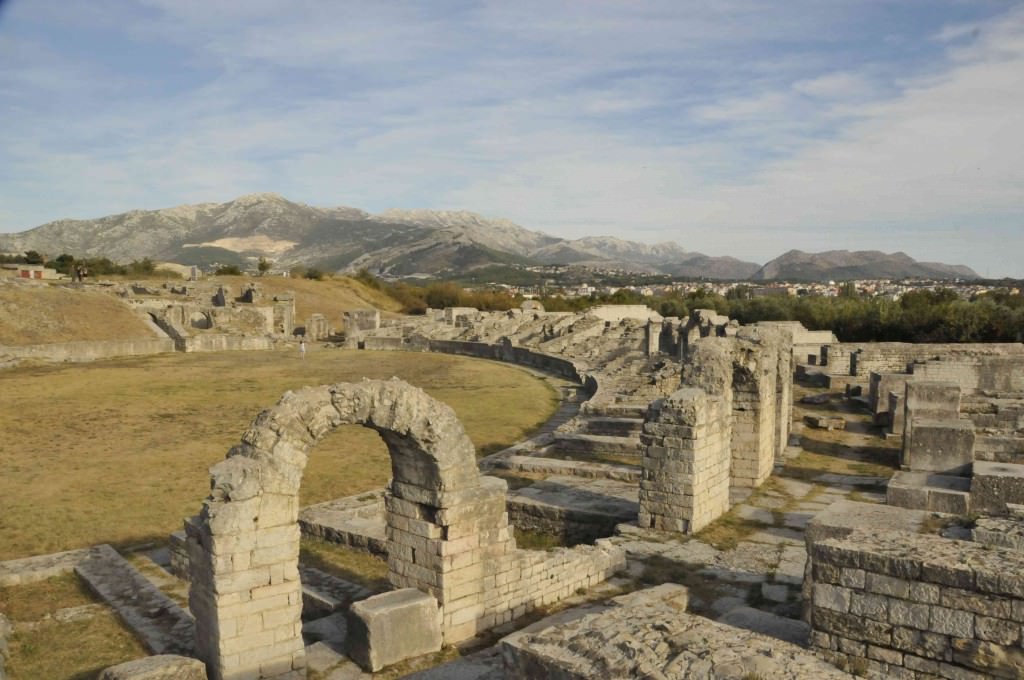 One of the other journalists on this press trip, Marcy Gordon, couldn’t stop repeating “this is the best sardine I’ve ever had,” her arm stretched across the table with the plate of small boned fish. The flavors were simple, and once again olive oil threw everything into overdrive. Zdravko also told us that it’s common to eat many dishes with one’s hands, particularly antipasti, such as the local smoked prosciutto from Soline, but grilled fish and squid, too. Unless a fork is absolutely necessary, anything seems to be fair game.

One dish that requires not only a fork but a knife is the local specialty, pasticada. This dish is a must-try from anyone who likes meat and pasta. Stewed beef is served over pasta, usually homemade gnocchi, with a rich sauce that uses everything from carrots, celery, and onion to peaches, plums, and pears as a base. Each restaurant serves its own version, and Konoba Varos, whose pasticada really blew my mind, includes prosecco among its “secret” ingredients. 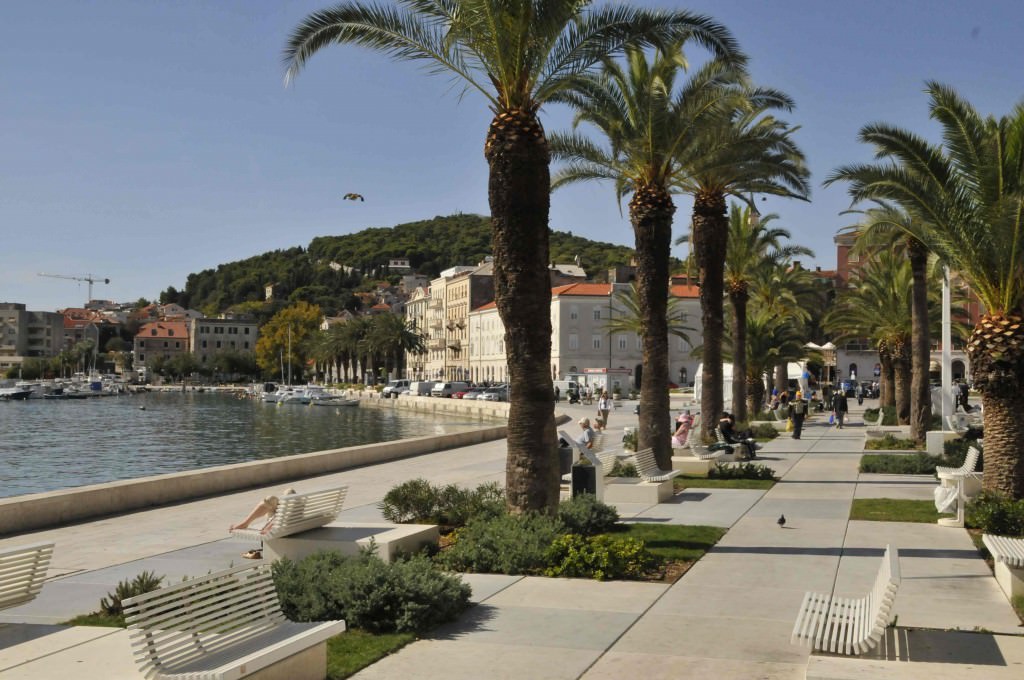 The next afternoon, after driving further up the coast to the city of Sibenik, I visited Konoba Dalmatino, where I ate more incredible seafood. Chef Sinisa Cular had sent his friends out to collect four types of local shellfish just four hours before. Much of the seafood served in Croatia’s restaurants is farmed—for better or worse—but this selection of oysters, clams, and two types of mussels were wild. I found both a pearl and a small crab—still alive and pinching—in one oyster; the former I saved as a memento, the latter I ate in one slurp with the oyster it rode in on. It was sweet and a lot like Maryland soft-shell crab.

Sinisa served another of Dalmatia’s specialty sauces: buzara. Buzara, or buzzara, is comprised of white wine, tomatoes, olive oil, onion, parsley, garlic, and paprika; the paprika gives it richness. In traditional style, the sauce is served with whatever shellfish is in season. At Konoba Dalmatino it’s called sibenske pidoce (definitely order it). The locals believe that mussels are best if harvested at night on a full moon, and the moon had been full the night before.

Unfortunately, seasonal cooking is not as popular as it once was within the local homes. Grocery stores have grown prevalent in the last 20 years, replacing some of the markets. Vanja Dadic, our Sibenik guide, reminisced. “I remember when I grew cherries on an island near the natural park, they filled everything with their smell, the house, your hands, everything.” 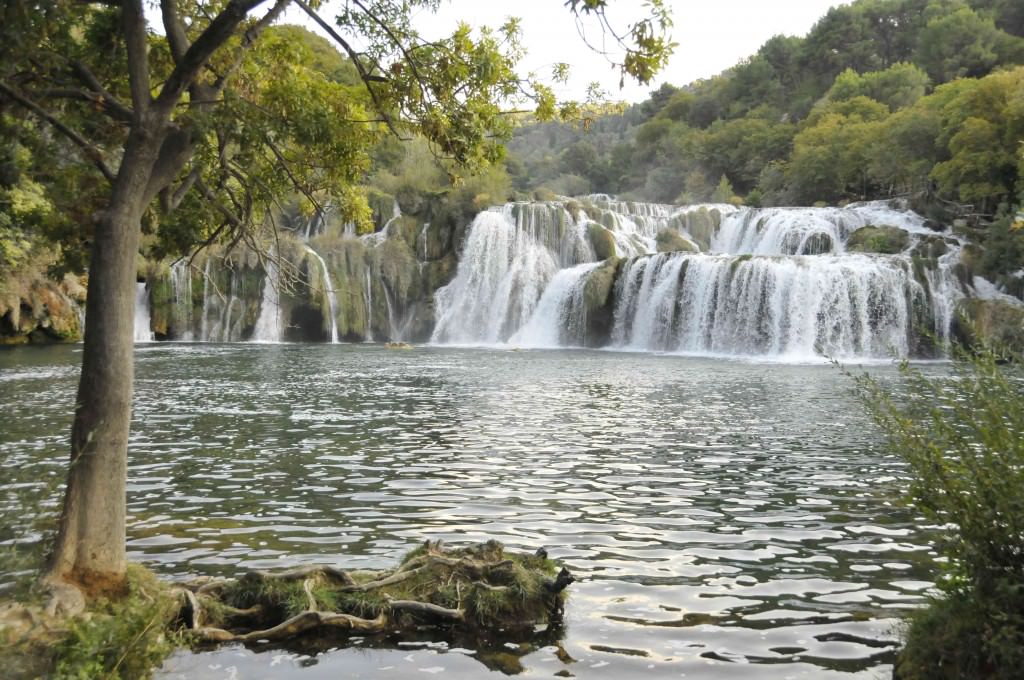 I ended my day with a trip to the Krka National Park. The city of Sibenik has a serene bay, and the only way to come in or out is through a mile-long channel between giant cliffs. A river also runs into the bay (creating the perfect brackish water for flavorful and large shellfish) and sailors can actually sail to Krka National Park, spotting waterfalls along the way. Skradinski buk is the most famous part of the park, and home to a multi-tiered falls.

Next, I’ll visit the island of Pag, where Croatia’s most important cheese is produced: Paski Sir. I’ve seen pictures and the island looks like the moon: no trees, hardly a bush. I can’t wait to try this gourmet cheese at the source!

Sperun – $$
This is the place for grilled or baked fish. The owner is a lively character, so make sure to say hello; he’ll likely impart even more local flavor.
Sperun 3, Split

Hotel Jadran – $$$$
Located right on the waterfront, this hotel has a true maritime feel. The rooms are sparse but cozy (almost salt-encrusted), and they remind me of a sailboat’s sleeping quarters. The power went out for ten minutes around midnight, adding to the funky atmosphere. Breakfast included. 90 minutes of WiFi gratis daily.
Franje Tudmana 52, Sibenik

Restaurant and Café Recommendations in Sibenik

Café at Monastery St. Laurence – $
This café is located in the church’s medieval herb garden. It’s a great place to sit down for a drink after a day of seeing the sights. Very tranquil during the day, but it can get lively in the evening.
Sv. Lovre, Sibenik

Caffeteria Giro Espresso – $
Get your Illy fix here. It takes coffee seriously, and you can taste it.
Zagrebacka 2, Sibenik

Marina Restoran – $$$
Located about 15 minutes from Sibenik in the little town of Skradin, this restaurent specializes in the peka cooking method. A peka is a bell-shaped lid and lamb is traditionally cooked beneath it with potatoes and vegetables. The flavors all fuse. Outdoor and indoor dining available.
Obala Bana Pavla Subica 14, Skradin

Written by Mattie Bamman  for EuropeUpClose.com

[...] We entered one restaurant advertising Spaghetti alla Buzara. After my excellent experience with buzara in Croatia, I wanted to show this dish to my girlfriend. Unfortunately, when the plates arrived they were [...]

[...] For a list of restaurant recommendations, check out my article, From Split and Sibenik with Love and Wine . [...]