Dresden is a city that is rebuilding itself daily. Dresden citizens  are working to make Dresden the cultural and artistic mecca it was before World War II and the dramatic firebombing of 1945 that made the city a burned out pile of rubble. 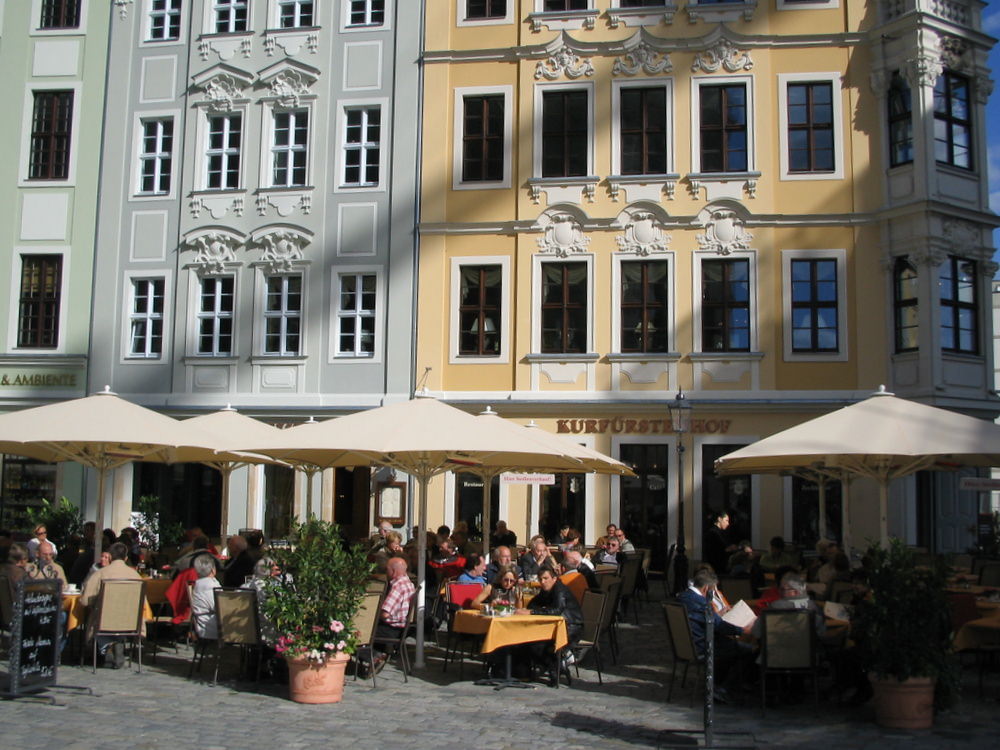 Our hotel looked out at the Frauenkirche, a symbol of the spirit and tenaciousness of the citizens of Dresden. This exquisite, baroque church was, until 1989, a pile of burnt stone. The people of Dresden saw it as a silent symbol of the devastation of war and a place for peaceful protest. As an outgrowth of the reunification of Germany in 1989, citizens came together to rebuild. In 1994, the first stone was placed and on the 30th of October in 2005, the completed church was consecrated. Note the dark stones in the photo below; these were from the original church and through a computer program, were placed in their original positions. Dresden is building itself into the city it once was and into a new city for a new age. 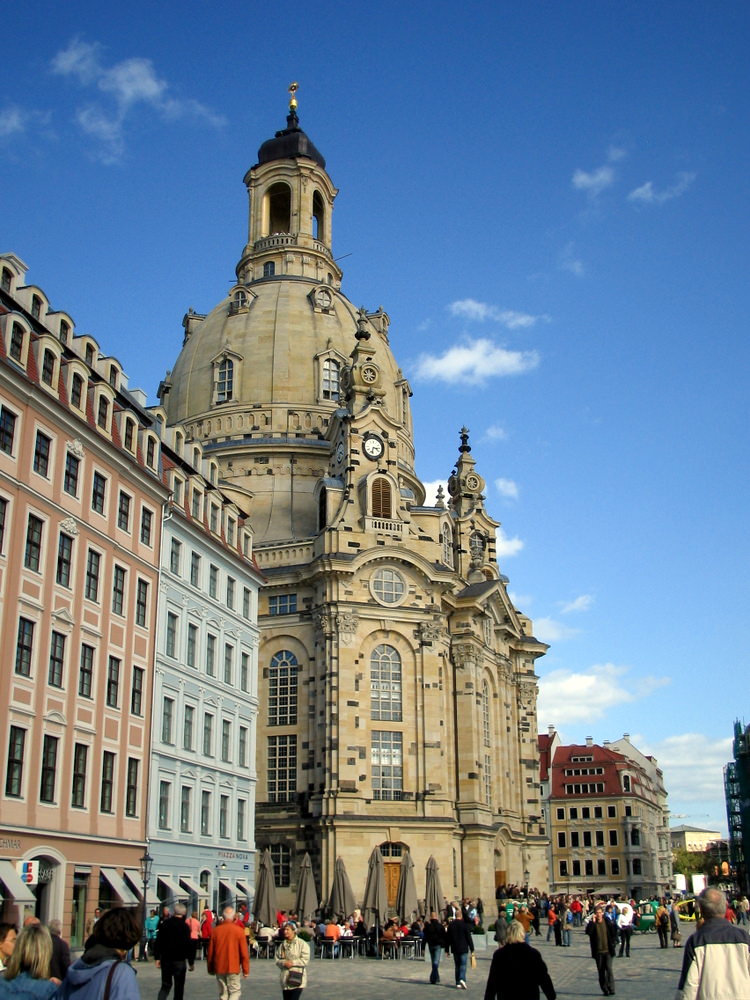 We took the Stadrundfahrt Dresden sightseeing bus for a city tour. Although we are staying in the heart of old town, there is lots more to see in Dresden, and this bus will take you there and be back every half hour to pick you up. Stops along the way include the Albrechtsberg Palace, the “Transparent” Factory of the Volkswagen Group, The Pfunds Dairy, which is considered the most beautiful dairy in the world, and much more. For more information about things to do in Dresden, check out this helpful Dresden Guide. 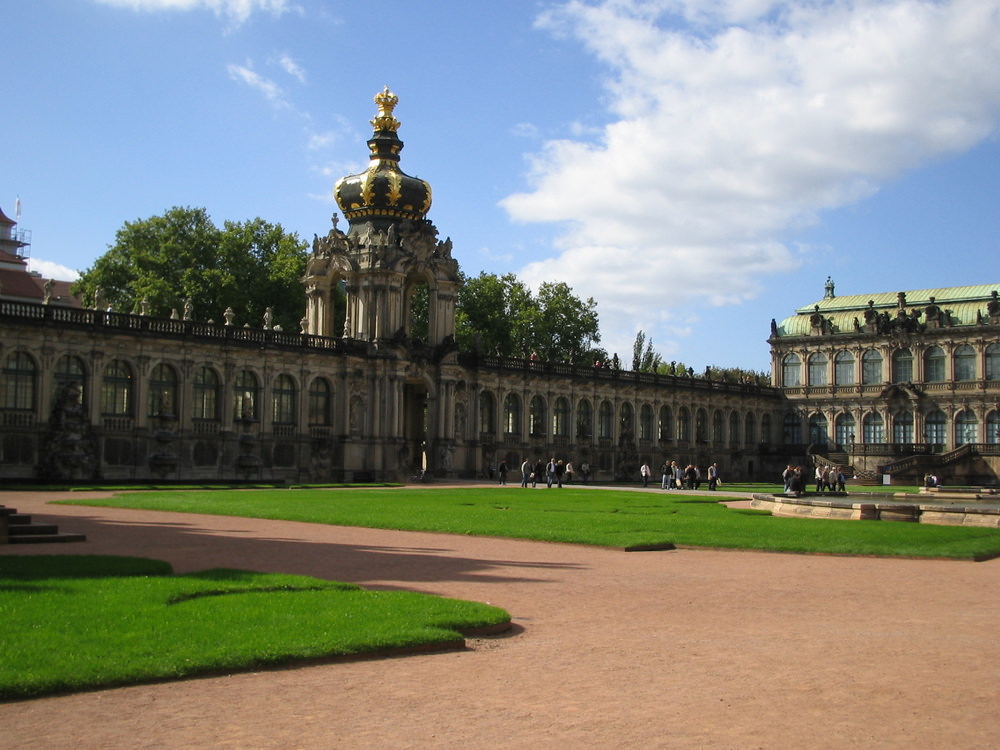 We visited the Zwinger, a must-see in Dresden for its ornate architecture and formal gardens. And then took a 90 minute cruise on the Elbe on a steam driven paddle-boat. This trip takes you past palaces and beneath bridges, one cheerfully named the Blue Wonder, because of its blue color and the fact that it spans the Elbe with no pilings in the river itself. It was a wonder of engineering, at the time. Sachsische Dampfschiffahrt operates the largest and oldest fleet of historic paddle steamers in the world and we had some great views from the river. 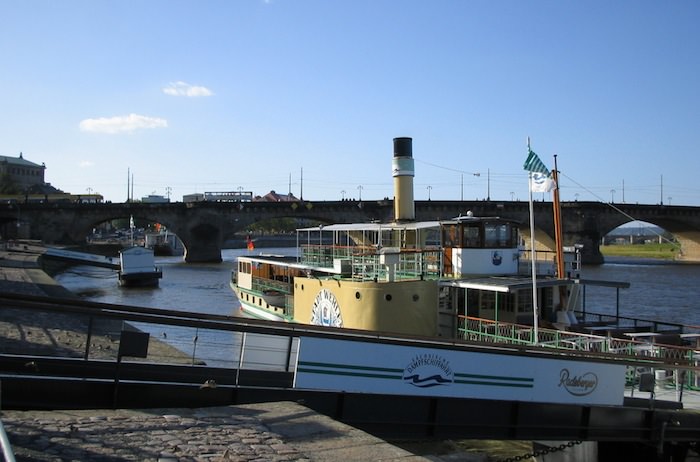 We met a representative of the Dresden-Werbung and Tourism Office for lunch at the beautiful Kurfstenhof Restaurant. After lunch we visited the New Green Vault in the reconstructed Dresden Royal Palace. Intricately carved ivory, jewels and gold beyond imagination are incorporated into ornate works of art and craftsmanship, all part of the collection of August the Strong. 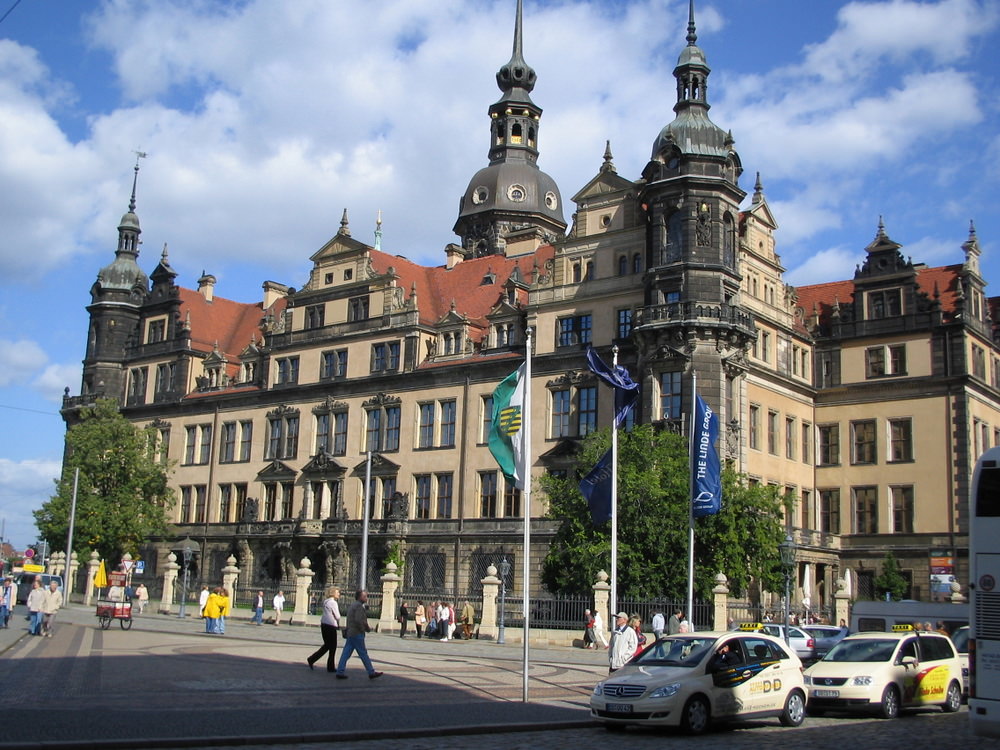 We also were awed by Der Fürstenzug. “The Procession of Princes” is made up of 25,000 Meissen porcelain tiles that were taken from an earlier  1589 wall fresco and later sgraffito by Wilhelm Walther. Created between 1904 and 1907 the Fürstenzug depicts images of princes, kings and other dignitaries on horseback. The 335 ft  long panorama is located on the north wall of the Stallhof on Augustusstrasse from near the Semper Opera over to the Frauenkirche.  Fortunately, only about 200 tiles had to be repaired because of WWII damage. 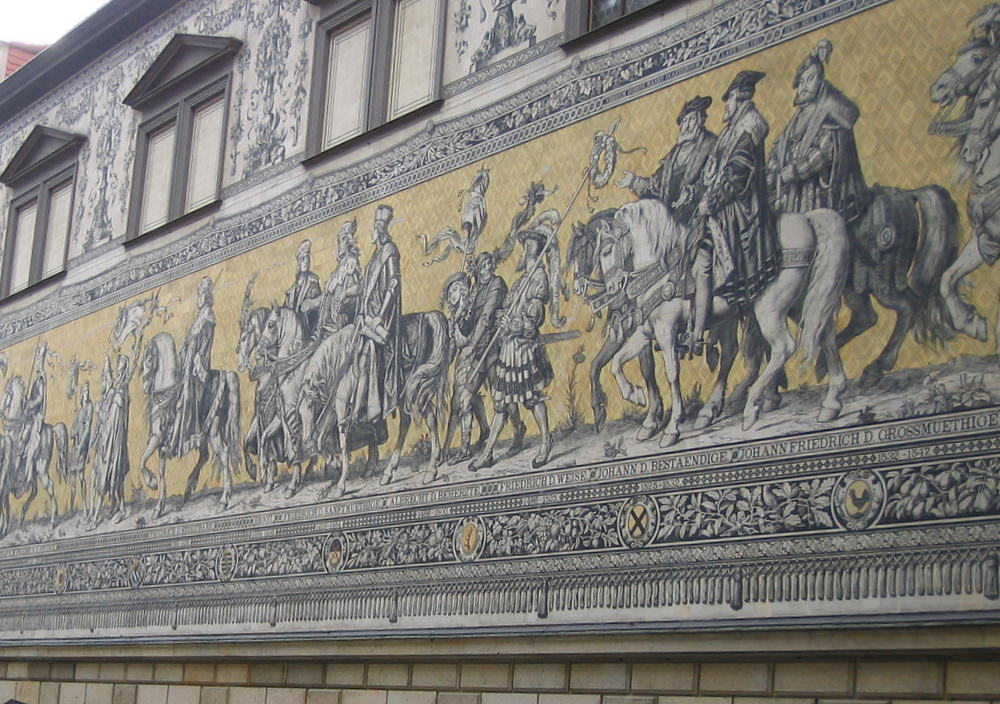 Der Fürstenzug – the march of the

Dresden is a must see when visiting Germany. Or, if Prague is on the agenda, Dresden is a short train-ride away.

[…] If you happen to think that the North Pole is the most festive destination on earth come Christmas time, you might need to reconsider your position. To find yourself in the heart of Christmas cheer, you really need to head a little further south—down to Germany to the wondrous Christmas wonderland known as Dresden. […]

We have new posts every day and I am sure we will have one on Weimar. Germany as well. It sounds beautiful. Thank you for reading EuropeUpClose.

Hallo...I am surprised that you do not mention Weimar, Germany. It is a wonderful town filled with much culture, home of Goethe and Schiller. Was named the Multicultural City of Europe a few years ago. It has many interesting things to see and do, including much history.

If you want to see beauty, a clean community, truly a multicultural experience, good food, friendly people... I recommend Weimar. They have many accommodations from hostels to hotels. The hostels are new, in the heart of the city and not expensive. Very clean and private. Thanks, Susan

Terri, Thanks for your quick response to my inquiry. Others have recommended visiting Dresden, but I will certainly check out the article about Leipzig. All in all I am looking forward to visiting Europe again. John

Hi John, There is a story on Leipzig in the June issue of Conde Nast Traveler that you might want to read. Since I have not been to Leipzig, I cannot comment on that city. But as a recent traveler to Dresden, I heartily recommend this beautiful city. Rebuilt on the ruins left from the war, you cannot imagine it ever looking any different. It is a small city, but there is a lot to see, and you can do it in one day. The Zwinger, the royal palace, a boat ride on the river, and the extraordinary Frauerkirche are waiting for you. Terri