Ireland’s Ring of Kerry is one of the most scenic routes in Ireland. It circles County Kerry, on southwestern Ireland’s Iveragh Peninsula, and bypasses several tourist sites. Multiple bus companies make daily loops along the route as day-trips, but renting a car and exploring over the course of a few days can offer a more in-depth look at this beautiful area and its quintessential Irish landscape of rolling highs and lush meadows hued in brilliant green.

Tour buses run counter-clockwise, so if you are driving yourself, be sure to set out clock-wise. This will decrease your chance of getting stuck behind a line of slow-moving tourist coaches. The Ring is 179 km so it could conceivably be driven in one day, but with so many things to see and a few side trips worthy of a detour, a minimum of 3 days is recommended. It’s best to arrange accommodations in advance during the high season, as places do fill up. 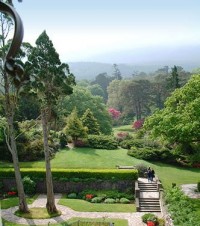 There are several sights to check out between the start of the route in Killarney and Kenmare, a good place to stop for the night. Starting from Killarney, drive through The Gap of Dunloe, a scenic narrow pass that descends into the Black Valley. Then it’s on to The Muckross House and Gardens on a spectacular 19th century estate. Visitors are invited to stroll the grounds, tour the working farm, and dine in the garden restaurant. Nearby the estate is the beautiful Tore Waterfall, a natural waterfall situated on a lush mountain. The Ladies View, a scenic viewpoint over the idyllic countryside, is further down the road towards Kenmare.

It’s possible to stop overnight between Kenmare and Caherciveen, the harbor town that marks the halfway point of the route, but tourist amenities along the way are few except at the nearby town of Waterville, a picturesque holiday retreat popular with golfers, so Caherciveen may be a better option.

Near Caherciveen, the ruins of Ballycarbery Castle and its stone forts provide a look at Ireland’s feudal history. It’s also worthwhile to take a day trip to Skellig Michael, a rocky, mountainous island about 15 miles off the coast. Journeys there take under an hour and visitors who make the choppy crossing are rewarded with the opportunity to see the relatively untouched remnants of the 7th century monastery, a UNESCO World Heritage Site, set amongst a wildlife nature reserve.

Continuing on from Caherciveen, the town of Glenbeigh is worth a stop. The town boasts 8km of golden sand beach at Rossbeigh. The beach is popular with windsurfers and provides unparalleled views of the surrounding mountains. Also nearby, the Bog Village is a recreated 18th century thatched village, complete with exhibits on traditional crafts.

Killorglin makes a great final stop along the Ring of Kerry. The town is home to the annual Puck Fair, which runs from August 10-13. The wild and wacky Puck Fair is Ireland’s oldest fair and features music, family entertainment and games, dancing, a circus, parade, cattle fair, fireworks and a whole lot of eating and drinking.

For those who have not traveled in Ireland, here’s hoping that this brief, idyllic description of one of Europe’s most beautiful destinations will move you to explore the Ring of Kerry.