An hour to go and crowds are gathering. Leaving our shady niche in the flowery Alexandrovsky Garden, my husband Rick and I stake a spot with a good view along the outside northwest Kremlin wall. Exactly on the hour all heads turn toward three soldiers “goosestep” marching; their legs with locked knees swing in unison high off the ground, their rifles balance vertically from their left hand bent at the elbow. They precede toward the Tomb of the Unknown Soldier, wherein lies the remains of a soldier who died December of 1941 at the closest point the invading Nazis came to Moscow – 25 miles south of the city.  The ritualistic changing of the guard completes with the exiting soldiers’ precision march off the grounds – an exhilarating display and my number 1 Moscow travel tip and recommendation! 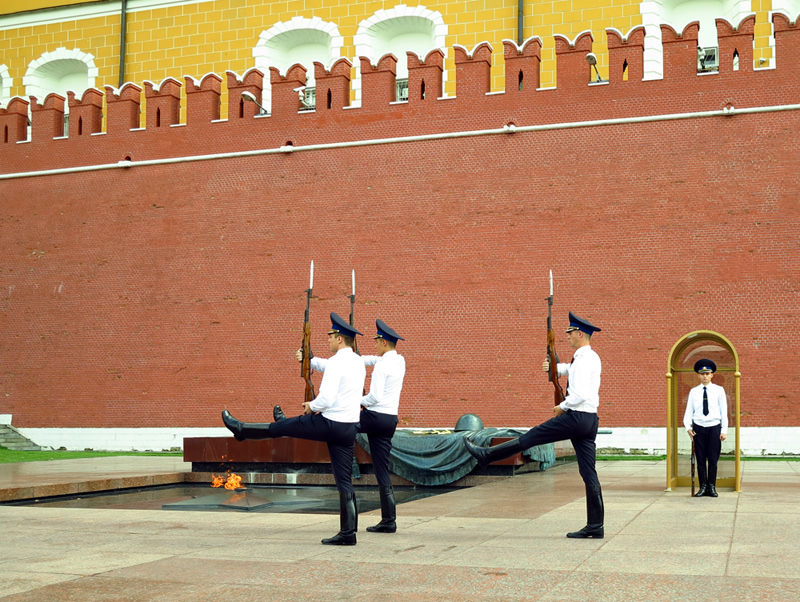 We round the corner to enter Red Square’s sizable stretch of cobblestone. My heart flutters as my eyes glue to the sight of St. Basil’s Cathedral; its onion shaped domes and exterior in as many dazzling colors as the most elaborate artist’s pallet. The other sides of the square are flanked by the grey stone GUM Department Store, the imposing State History Museum, and the Kremlin’s blood-red brick eastern wall, which incorporates the Lenin Mausoleum.

St. Basil’s draws me in with magnetic force. Expecting a large open interior, I am taken by surprise at the seemingly endless maze of small stone chapels joined by slender passages and narrow winding staircases. The Cathedral was erected between 1555 and 61 to celebrate Ivan the Terrible’s victory over the Tartar stronghold of the Khan of Kazan (grandson of Genghis Khan). Officially named the Cathedral of the Intersession, it’s ironic that it is commonly known as Cathedral of St. Vasily the Blessed (Anglicized as Basil), one of the legendary “holy fools” who dared to lambast  Ivan the Terrible for his tyrannical policies, and got away with it. No doubt the Tsar’s reluctance to do away with Vasily stemmed from fear of the believed uncanny powers of holy fools, who habitually mortified their flesh and braved winters walking the streets naked and homeless uttering prophesies. A section of the church is dedicated to icons and textiles that depict the lives of these radicals. I cringe looking at the pain-inducing set of fetters and weighty felt-covered oblong metal hat once belonging to St. Ivan, St. Basil’s successor. Many more nooks, crannies and lovely frescoed walls later, an enclave resounding with mellifluous chants from a small men’s choir is a divine ending. 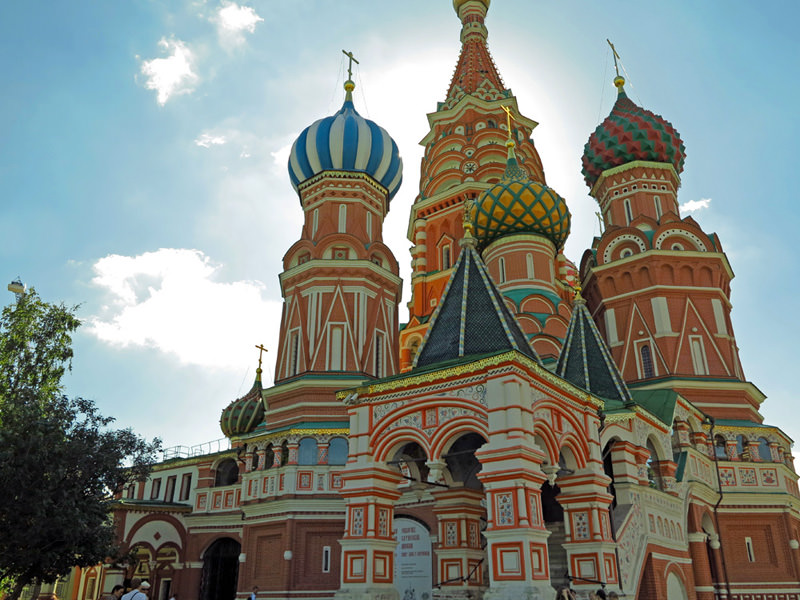 For a bit of needed sustenance we head for the GUM, which during Soviet times stood for Gosudarstvennyi Universalnyi Magazin, meaning State Universal Store, or State Department Store. It was one of the few stores that had a good supply of goods to buy, and the queues of shoppers were often so long they extended entirely across the square.

It came under private ownership in May 2005 and today drips of elegance with 200 designer shops, restaurants and cafes under the timeless vaulted glass roof, granite and marble walls and stairs. Cleverly the same acronym GUM remains, the “G” now standing for Glavnyi (Main). Our cappuccinos in a deluxe cafe are accompanied by large wedges of decadent cream cakes. 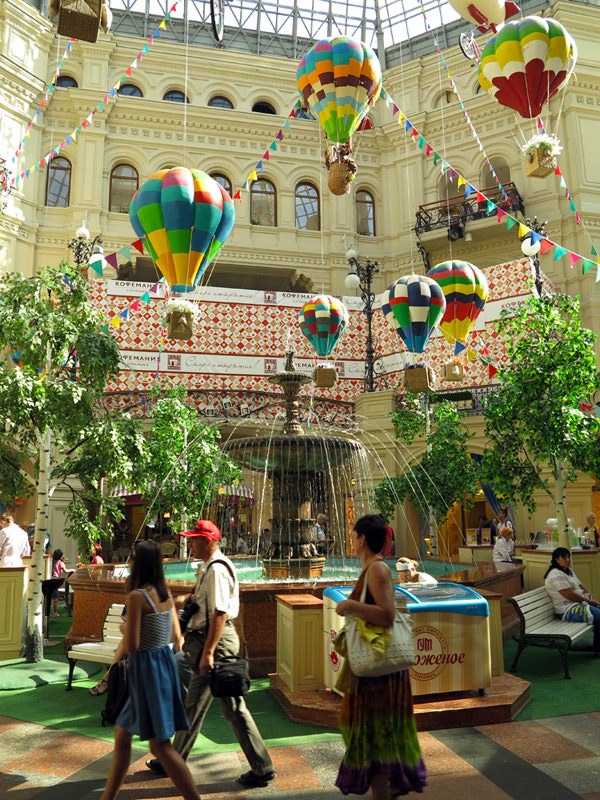 Recharged, we join the lengthy queue to enter the Mausoleum of Vladimir Ilyich Lenin (1870-1924). Along the raised pathway to Lenin’s Tomb we pass the Kremlin Wall Necropolis with plaques in a row indicating earlier prominent figures that are buried within the wall. Closer to the tomb are marble daises with busts of more recent Soviet leaders, and albeit the plaques are written in Cyrillic, I recognize Joseph Stalin and Leonid Brezhnev. The entry to the Mausoleum is flanked by guards. Filing past Lenin’s waxy form, I shiver from more than the cold air at the sight of the man who was the Force behind the Russian Revolution. Some predict Lenin’s body may not lie in this tomb much longer. Lenin’s last request was to be buried next to his mother in St. Petersburg, and much to the chagrin of his widow, Stalin decided Lenin’s body should lie in state. Stalin hired a biochemist and anatomist to put a stop to natural decomposition. The successful chemical solution and method remains a state secret, at least to most. It is said the formula is now available for a mere million dollars. 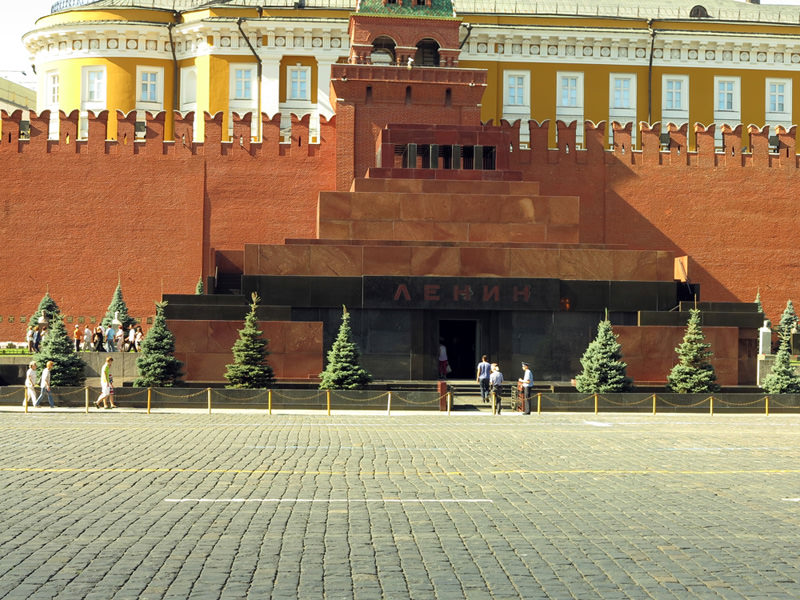 We next venture inside the famed Kremlin walls dotted with nineteen watch towers, including the stunning Spasskaya Tower. The range of style in the collection of huge buildings facing us is indicative of the Kremlin’s long history. The Great Kremlin Palace was the 700-room home of Russian Tsars in the 19th century, and later the center of Soviet power. In contrast to this ornate golden-hued edifice of Romanov imperial classicism is the modern design of the State Kremlin Palace (a.k.a. Palace of Congress) in sullen concrete and glass, with nearly half of it submerged underground. Built in 1960-61 for the Communist Party, it remains the apex of the current Government, with most of this mega structure off limits to tourists. The country’s presidents once lived within the Kremlin, but now only work here and receive their own residence in an elite area of the city, which they do not have to vacate at the end of their term. 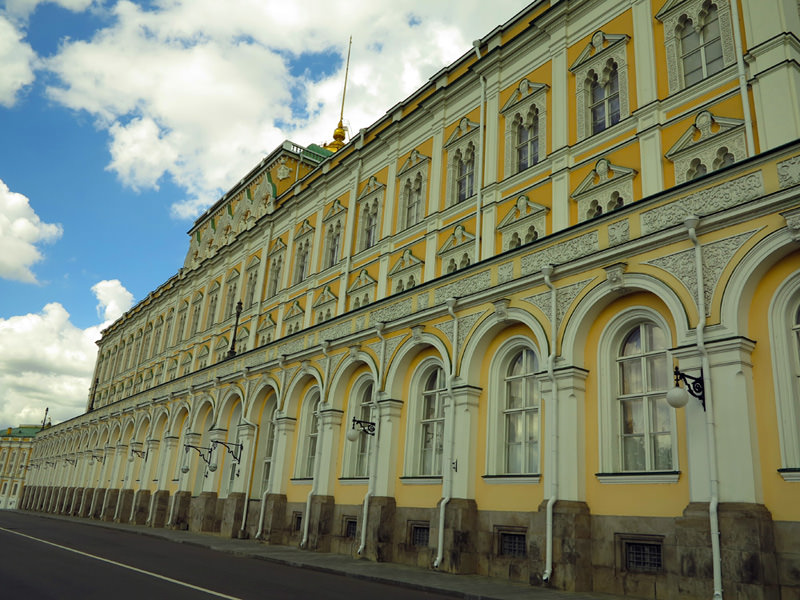 The Kremlin’s ancient Russian ecclesiastical cathedrals devour my attention. Annunciation Cathedral, erected in 1482, is where Russian Tsars were christened and married. Cathedral of the Archangel dates back to the early 1500’s and holds the tombs of rulers from Ivan I to Ivan V. The granddaddy in size and age (1475) is the Assumption Cathedral. I gaze up at brass chandeliers weighing several tons, and wonder at how some were carried off by Napoleons’ soldiers, then retrieved by the Cossacks after catching up to the pilfering Frenchman. Victory over Napoleon in the Patriotic War of 1812 is a proud achievement in Russian history. 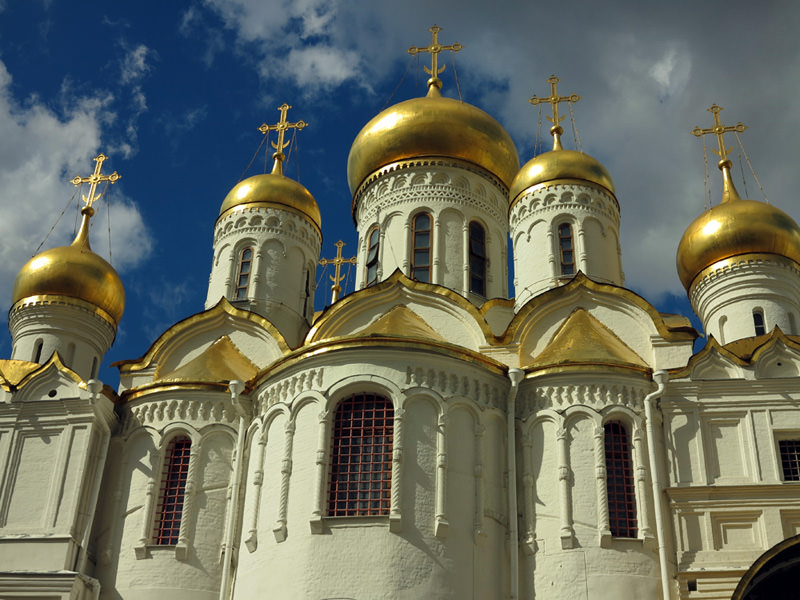 Outside the Kremlin walls again, we make our way to the area behind Red Square to mill about the swarms of Muscovites and visitors enjoying the weekend set-up of souvenir and snack vendors, side-walk cafes and restaurants. Filing into an open-air eatery, we dine on Borscht (beet soup) with sweet peppers, crushed garlic and a dollop of sour cream the size of an orange. Fillets of herring in a brine of pickled green apples doused in creamy butter sauce go well with hunks of rich black bread. As we clink our glasses of pivo (beer) we declare Moscow a “foodies” heaven. 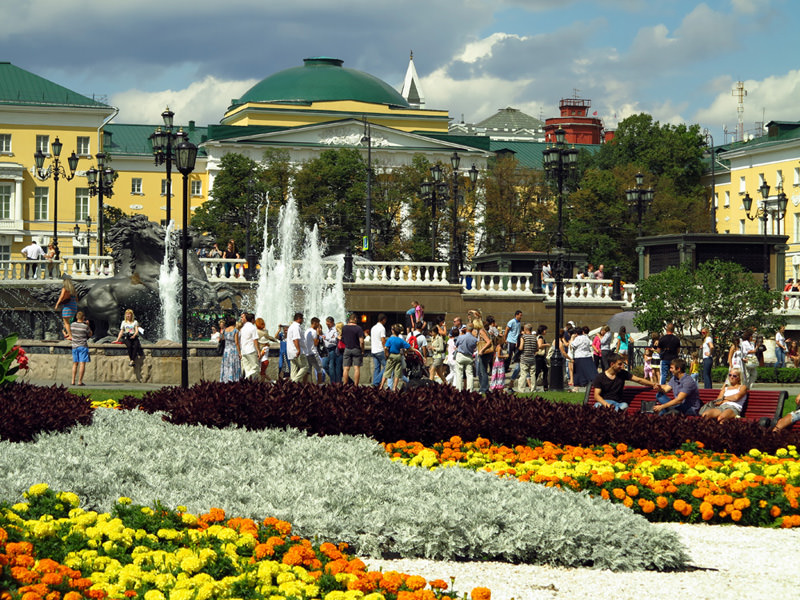 The Kremlin and Red Square’s mega footprint of historical and political events in Russia since the 13th century leaves us wanting more. It is time to spread our map and tighten the laces of our walking shoes to explore sights beyond Moscow’s heart.

There are now small hotels converted from apartments for a reasonable price in the historic area. We found a gem in the Matreshka Hotel, a few blocks away from the Kremlin – English speaking staff, good-sized clean and comfortable rooms, great breakfast included.

Travel Tip:
When travelling in Russia without being part of an organized tour group, we found few English speaking locals, information brochures in English difficult to find, and English tour guides at museums/cathedrals, etc. are rare. A good guide book is a must. And, knowing how to read the Cyrillic alphabet is beneficial to identify streets, restaurants, etc. If not, have hotel staff write out the street/site names in Cyrillic, so you recognize them.

[…] Moscow – the Kremlin and Red Square Moscow – Beyond the City’s Historical Centre Lake Baikal – Russia’s Galapagos St. Petersburg – the Enchantress Her story on Bohol Island in the Philippines appeared in “Day Trips Travel Guide”. The Philippine Island of Bohol […]