The luxury of having a full week in Moscow is that after visiting the Kremlin and Red Square, there is still time to discover the pulse of the city as you explore the streets radiating from these highly visited sites. The choices are so varied they defy being put into categories while  also revealing the many faces of Russian history. 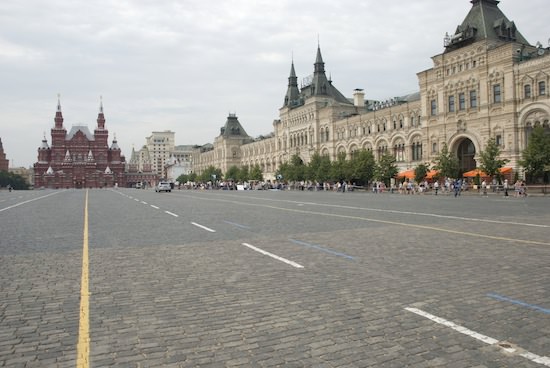 Along Petrovka Ulitsa (street) my husband Rick and I behold the iconic neoclassic design of the Bolshoi Theatre. Sitting on a bench facing this prestigious edifice, I imagine the countless young dancers and opera singers who sat in this very spot envisioning performing within. First completed in the late 1700’s, it has seen fires (once burning to the ground) and has been rebuilt and renovated many times. In 2005 the theatre was closed for major reconstruction, reopening its doors in 2011. During this period the high caliber of entertainment was moved to the Great Kremlin Palace. 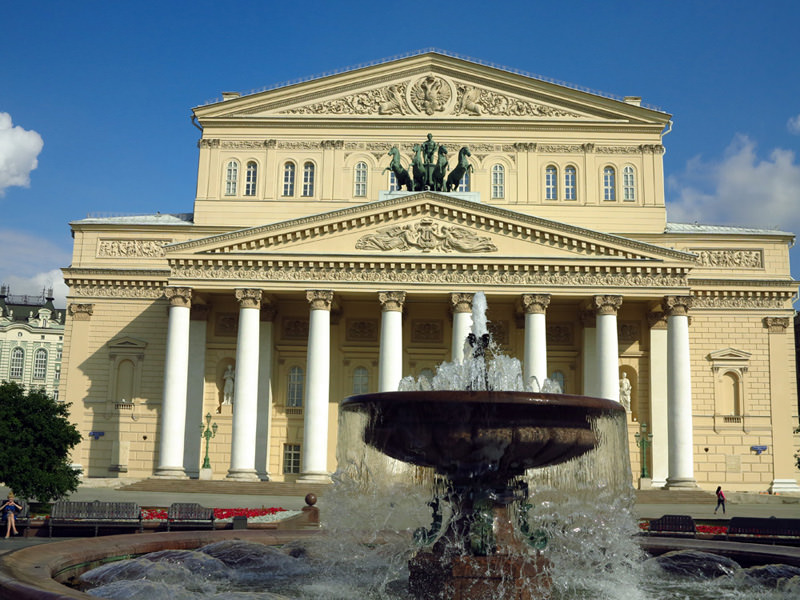 Walking further along, in the midst of glossy shops, we pass through an arch of barbed wire to the State Museum of the Gulag. Founded in 2001 and opening for exhibition in 2004, it is an archive of documents, letters, memoirs and personal belongings of those who once passed through Stalinist camps, including historian and writer AV Antonov, the museum’s founder. One fascinating section is filled with evidence of how Stalin falsified history with many examples of original photos taken during this period, and the same photos doctored to remove people Stalin had purged and/or political rivals, especially Leon Trotsky, who was his chief adversary for power after Lenin’s death. 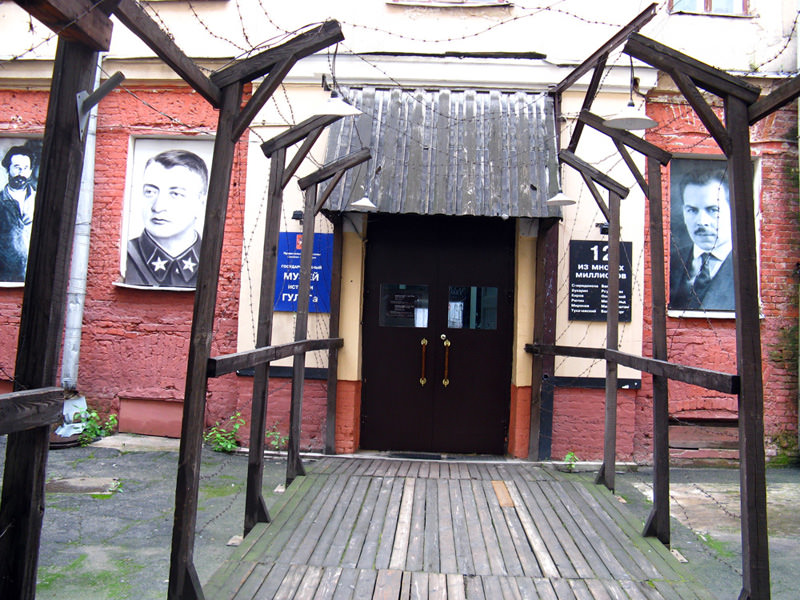 Petrovka Ulitsa takes on a taxing upward grade towards Vysokopetrovsky Monastery or Upper St. Peter’s Monastery. Dating back to the 14th century, buildings were added over the centuries for a total of six churches (some now crumbling) and a long red brick building containing monastic cells. In the 1700’s it was turned into a family burial place by the maternal relatives of Peter the Great. The monastery was pillaged by Napoleon’s soldiers during the Great Patriotic War, and in 1926 it was closed by Soviet Revolutionists. It did not  resume services until 1992. 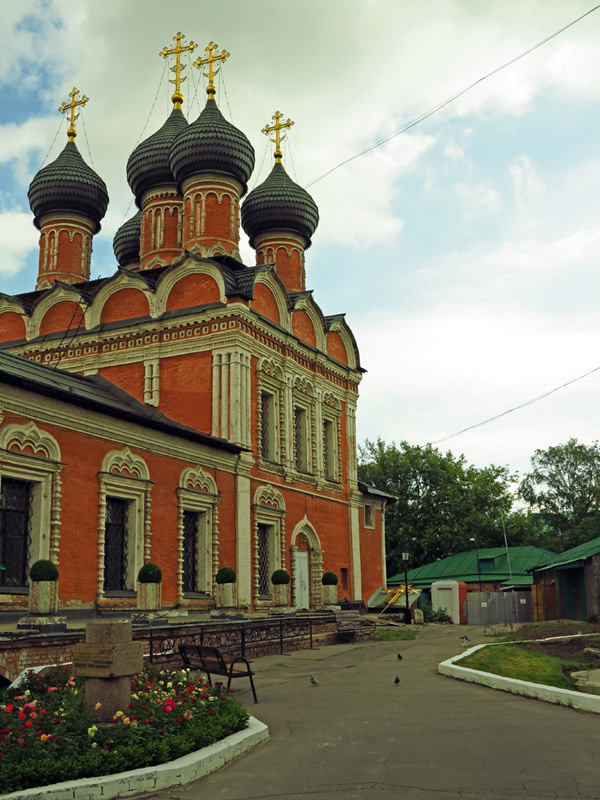 We see no other tourists among the few worshippers who go in and out of the many small churches with rope prayer beads in hand, which projected an aura of peace and tranquility that I found missing from the big cathedrals with tour groups charging about. It was fortuitous to witness the doors of the main church swing open at the end of the service and to watch the procession of black-clad clergy in their traditional Orthodox dress, followed by local families. 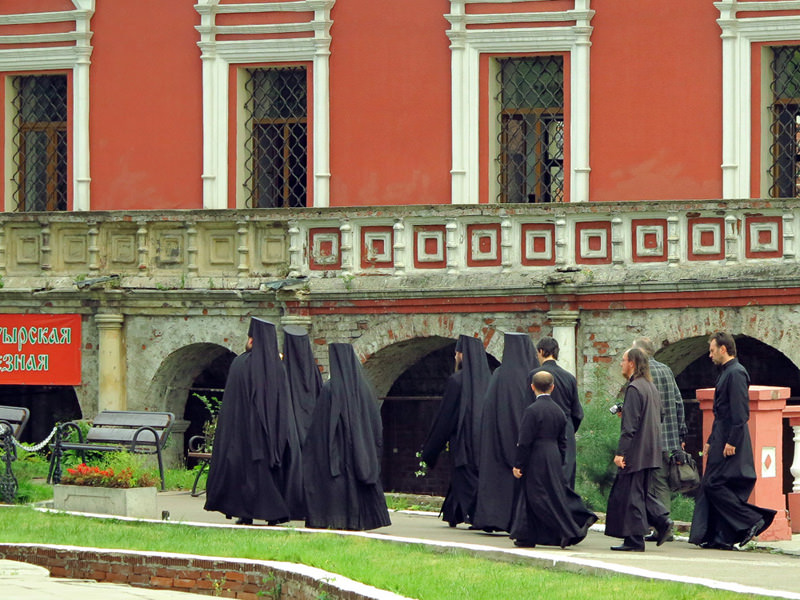 On another day’s walk we encountered Lubyanka Prison under a somber sky – apropos to its dark history. During the Stalin years, this was a feared KGB destination, and it served as a conveyor belt of torture, death or sentence to the Gulag for victims of Stalin’s purges. Between doing away with all who he suspected of plotting against him, and his self-directed famines wherein all agrarian production was confiscated by the State, the total of Stalin’s victims was in the millions. This facility is now the headquarters of the KGB’s successor – the FSB (Federal Security Service) and is therefore closed to the general public, although there is supposed to be a small KGB museum somewhere in the vicinity. 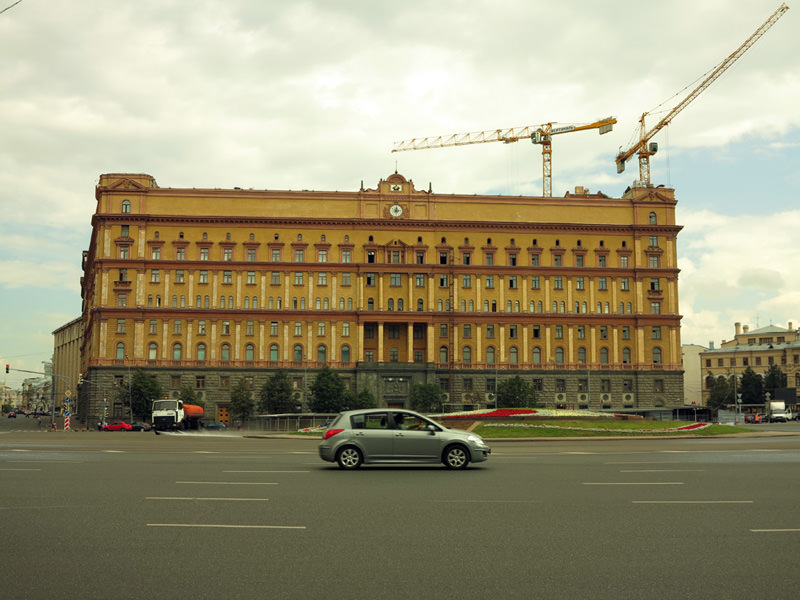 Former Lubyanka Prison of the KGB

Waking up to bright sunshine on our last full day in Moscow, a long leisurely walk to the famed Gorky Park is in order. Once a full amusement park, in 2011 the outdated carnival rides were removed….except for a lone merry-go-round churning out a jolly melody outside a row of small cafes. It behooves me to hop on this relic of past circus glory along with tiny tots being held on the chipped, yet boldly colored horses by their moms. Exploring parts of this 300-acre park, we find the focus is on a green escape to stroll, picnic, bike or jog about. Flowers line the walkways and benches surround the large water fountain. The benches also hold a smattering of older folk while young’uns run in the spray carried on a brisk breeze. The park is still being reconfigured, with plans underway to make it a bright star of the city. 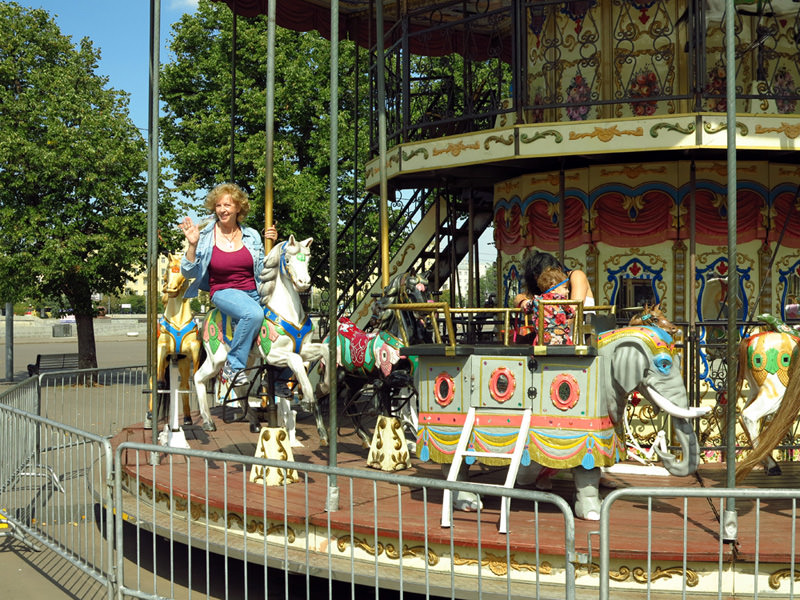 En route back from Gorky Park, we found a church that cries out for admiration with its humungous size, startling white exterior and gleaming gold onion domes.

“Do you know what’s strange about this church,” I say to Rick, “it looks newly built.” We find the name on a gold plaque on the fence – Cathedral of Christ the Savior. Later research reveals the original church, modeled on the Hagia Sophia in Istanbul by Nicholas I, was built in 1860, with an added 23 years to finish the interior. Only a few decades later Stalin (oh, that Stalin) had the whole structure demolished. The current cathedral was rebuilt in the 1990’s based on paintings and old records. 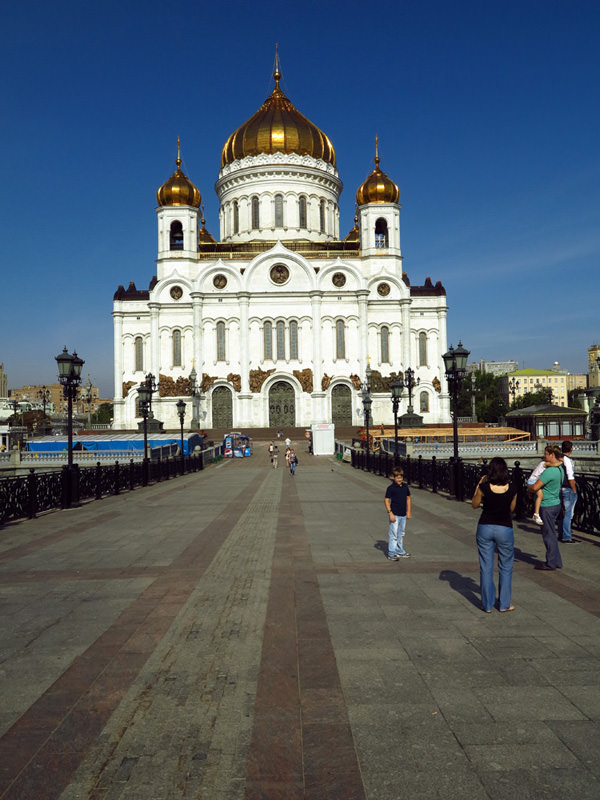 Cathedral of Christ the Savior

We leave Moscow enthralled by what we have seen, and if I had only one word to describe this capital of 11 million citizens, it would be “monumental” – the massiveness of structures throughout the city, each covering a city block along broad streets are manifestations as dramatic and gargantuan as Russia’s rich and complex history.

There are now small hotels converted from apartments for a reasonable price in the historic area. We found a gem in the Matreshka Hotel, a few blocks away from the Kremlin – English speaking staff, good-sized, clean and comfortable rooms, great breakfast, all included.

Travel Tip:
When travelling in Russia without being part of an organized tour group, we found few English speaking locals, English information brochures are difficult to find, and English tour guides at museums/cathedrals, etc. are rare. A good guide book is a must. Knowing how to read the Cyrillic alphabet is beneficial to identify streets, restaurants, etc. If not, have hotel staff write out the street/site names in Cyrillic, so you recognize them.

Written by Irene Butler and photos (Except otherwise noted) by Rick Butler for EuropeUpClose.com

[…] – the Kremlin and Red Square Moscow – Beyond the City’s Historical Centre Lake Baikal – Russia’s Galapagos St. Petersburg – the Enchantress Her story on […]