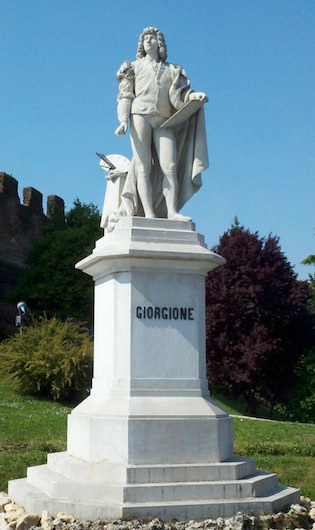 the remains of a 12th century castle from which the town takes its name. A statue of native son, Renaissance painter Giorgione, greets visitors from its pride of place on the northeast corner of the gateway to the old city.

You can, if you choose, spend a full day in Castelfranco del Veneto though its two major attractions, Casa Giorgione and the 18th century Duomo are easily toured within a few hours. Casa Giorgione, the restored house where the painter lived and worked, serves as an art and cultural museum for the Northern Italian Renaissance. The permanent collection includes a frieze attributed to Giorgione symbolizing the liberal and mechanical arts.

Adjacent to Casa Giorgio is the cathedral or Duomo. Completed in 1723, the cathedral was designed by Francesco Maria Preti over an ancient Romanesque church. Its Costanzo Chapel displays as its altarpiece Giorgione’s most famous work, “The Madonna and Child Between Saint Francis and Saint Liberalis,” otherwise known as The Castelfranco Madonna. Saint Liberalis is the patron saint of Castelfranco, and the painting’s background depicts the towers of the old town. Also worthy of special note are the frescoes by Paolo Veronese. 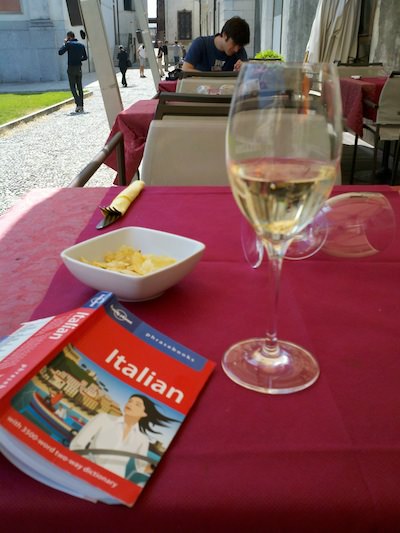 Exiting the cathedral, I break away from my group and spend some time solo exploring the charming arcaded streets with their many small shops, restaurants, and gelateria. But after almost a week of two hikes daily, sitting is not without appeal, and I search out a pleasant spot to settle in.

Bar San Giustino, situated on the corner by the Duomo and directly across from the municipio—city hall—proves an ideal spot for one of my favorite sedentary pastimes: people watching. Taking an outside table, I order a cappuccino and entertain myself with watching the newly minted married couples filing outside the city hall entrance. A new bride and groom emerge every ten or so minutes, a veritable matrimonial assembly line. This is Reality TV without the “TV” and entirely too fascinating a glimpse into local culture to pass on. Loath to leave, I follow my coffee with a glass of prosecco in keeping with the celebratory theme. Even factoring in the very uneven exchange rate, at 2 Euros the bubbles come cheap. Accompanying the wine are the obligatory nibbles, potato chips prettily served in a dainty white porcelain bowl. Munching away, I make a game of tallying the wedding parties’ preferred materials for pelting. Showers of rice, flower petals, and/or feathers predominate. No pigeon-friendly grains, at least not that I notice. 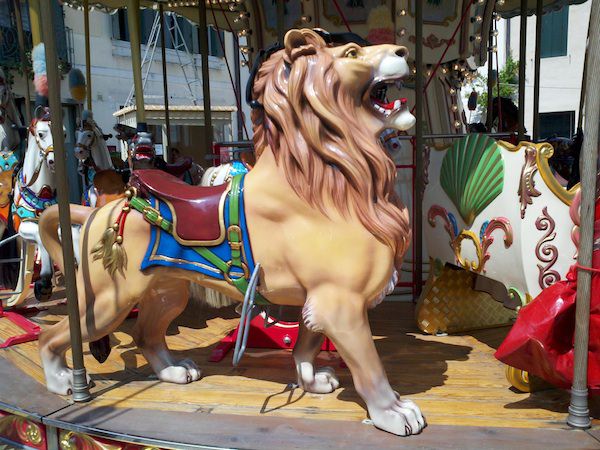 When my server returns with the offer of a second round of snacks, I spare a shamefaced glance for my empty bowls and wine flute and own it’s probably time to move on. Besides, the carousel across from the square begs a closer look and perhaps a ride as well.

I rejoin my group for lunch at All’ Antico Girone. It’s a fine weather day, and the restaurant’s lovely little side patio is sufficiently large to accommodate our five-person party along with a few other two- and four-top tables. Eschewing menus, we ask what’s good that day and place ourselves in the proprietress’s capable hands. As shared platter upon 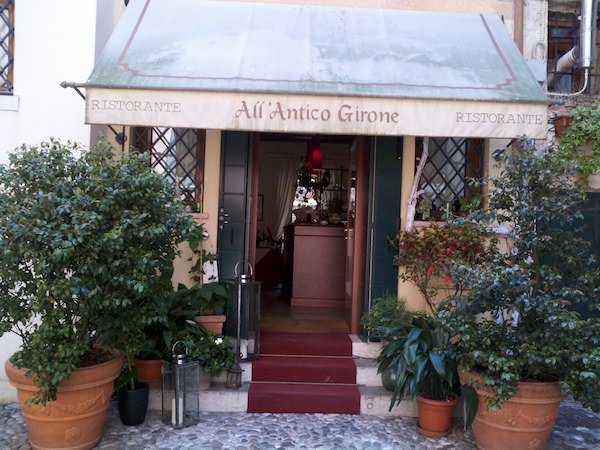 platter is brought out and quickly scraped clean, including special dishes to accommodate one traveler’s shellfish allergy and another’s vegetarianism, we acknowledge our blind faith has not been misplaced. Two bottles of prosecco and several of San Pellegrino are likewise consumed with enthusiasm. We end with the ubiquitous digestivo, not grappa but complimentary glasses of limoncello and limoncello crema. (The owner’s sister makes the limoncello crema herself, and it is divine)! Basking in the afterglow, we make for our mini bus—no, none of us are driving!—and head for Venice’s Mestre Station. There I’ll catch my train to Florence where three days of solo Eat, Pray, Love travel adventures await.

Getting to Castelfranco del Veneto

You don’t have to have a car—or a mini-van—to get to Castelfranco del Veneto. The Castelfranco Veneto Railway station, opened in 1877, is a junction of three railway lines: the Trento–Venice Railway, the Vicenza–Treviso Railway and the Calalzo–Padua Railway. The town is easily reachable by train from both Venice and Bassano del Grappa.

Written by and photos by Hope C. Tarr for EuropeUpClose.com

Thanks Nancy & Mary. I have a thing for both lions and carousels, so this was win-win. :)

Love the photos. Looks like you had a spectacular day for sightseeing. And I love the old carousel, too - it's a work of art unto itself.

Love the lion. There are so many cities in Europe with these old merry - go - rounds!