For better or worse, Croatia invites comparisons. The coastal towns and the cuisine of the Dalmatian Coast and the Istrian Peninsula remind me of Italy, and Zagreb, the metropolitan capital of Croatia whose restaurants feature a Continental cooking style, reminds me of a mini-Vienna. Croatia is a young country, fully established in 1995, and perhaps this is why it’s so tempting to make comparisons. But Croatia deserves to be recognized for being itself, especially in Zagreb. Here, local Croats stay out late in 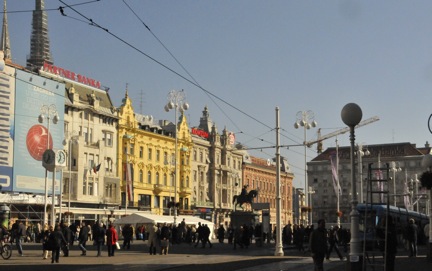 brewpubs and chefs use regional ingredients such as red meat and butter to cook Continental dishes, leaving Mediterranean-style cooking to the chefs on the coast.

I arrived in Zagreb late, along with the rest of my press trip colleagues. We were scheduled for video interviews, and I began my journey through the streets of Zagreb followed by a camera crew. Above ground trams wove between Art Nouveau buildings painted yellow, baby blue, and peach. At the open-air Dolac Market, known as the “the belly of Zagreb,” Chef Roberta Riplia met us with glasses of fruity, “domestic” (homemade) rakija and fresh portugizac. Portugizac is young wine—the newest wine from the fall harvest. It is the same as Beaujolais in France and novello in Italy. “This is how I begin each morning,” explained 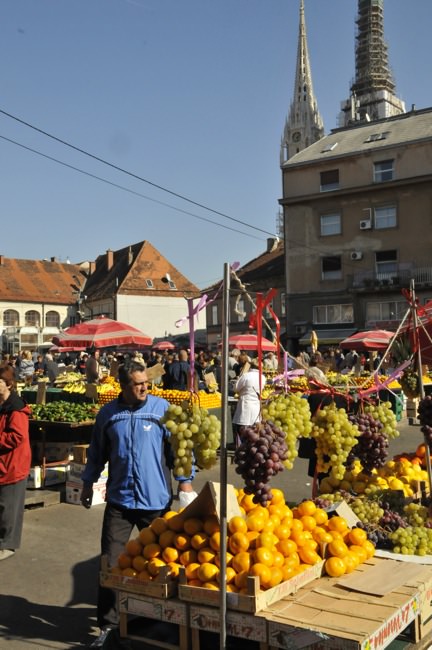 Roberta, “I have a glass of rakija with my friends then I look at all the cooking ingredients and plan my menu.” The wine tasted fresh, the morning air felt cool, and, for a moment, I felt completely connected to the country.

The Zagreb market is the perfect place to find high-quality ingredients for a picnic. Who says you can’t eat like a king even on a budget? Travelers can find mountains of red bell peppers, green and blue grapes, dried figs, fresh cheeses, and cured meats—the twin, gothic spires of the iconic Zagreb Cathedral high in the background. The camera crew filmed me as I photographed red-hot chili peppers hanging on strings beside braids of garlic and bags of paprika spice.

After Roberta showed us a few of the typical cooking ingredients, including bundles of vegetables designed for making the perfect broth and domaci cvarci, a sort of fresh crackling that tastes like bacon but has the texture of a cheese doodle, we struck out to see Zagreb’s most important sights. We would meet up with Roberta later for a cooking class. 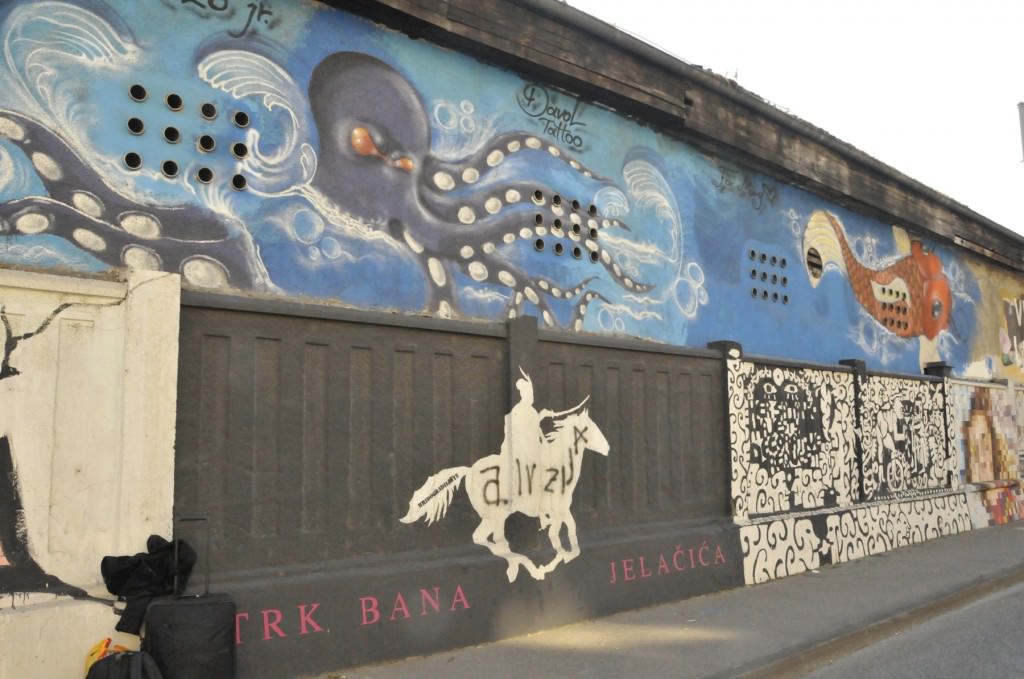 There are many strange, medieval things to see in Zagreb, such as St. Mark’s Church, which looks like a super-sized lego construction, but the electric atmosphere of Zagreb is the number one reason to visit. Cafes line the cobblestone streets, filled with 20-somethings with artful tattoos, chic clothing, and piercings. Kneza Branimira Street features cutting-edge graffiti in an attempt by local artists to make the ugliest street in Zagreb beautiful (I think they succeeded). Take a moment to check out the Museum of Broken Relationships, which features objects donated by couples who have broken up. Or, for an endless selection of cafes and bars, check out Ivana Tkalciceva Street. 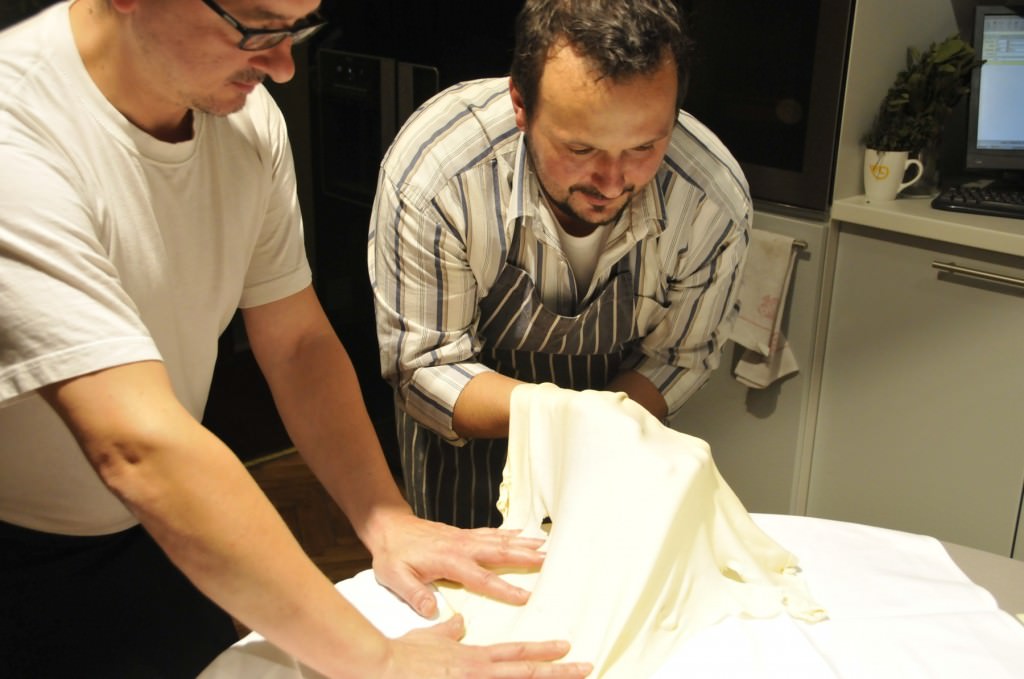 Traditional Zagreb cooking ingredients include crème fraiche, root vegetables, and lard. Strukli, which is similar to strudel, is the iconic dish of Zagreb, and it comes in sweet and savory versions. In fact, strukli can be served for any course. My favorites were a berry filled strukli served with a dolope of crème fraische and a squash-stuffed strukli, which ended up tasting similar to a soufflé, thanks to a mixture of egg and cream. The bakery at the Regent Esplanade Hotel is known to have the best breakfast strukli in Zagreb, and many local cafes actually procure theirs from the Regent. 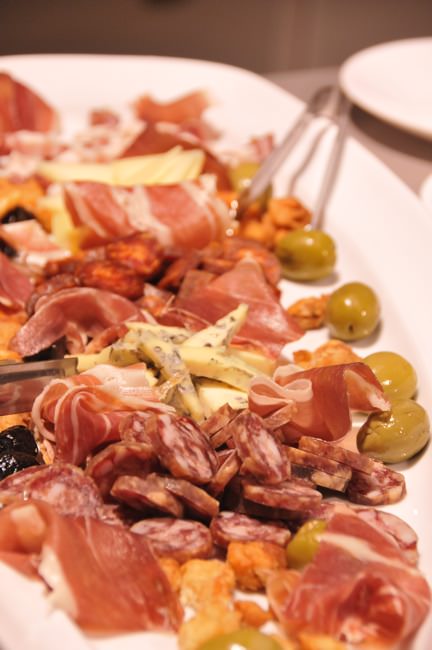 To teach me more about the local cuisine, the tourism board arranged a cooking class at the private restaurant, Klub Gastronomadi. Located on Ban Josip Jelacic Square, the main square, Gastronomadi immediately struck me as a peculiar restaurant. One section of the dining room was dedicated to a professionally lit cooking area, such as one might find on a cooking show. The faint smell of cigarettes wafted from a conference room down the hall, where filmmakers were assembled for the Zagreb Film Festival. The city has banned smoking in all public restaurants, but diners can smoke in Gastronomadi because it is a private club. Visitors can easily gain entrance to this “private” restaurant, simply by joining the club when reserving a table.

Chef Grgur Baksic came out of the actual kitchen and told us that we’d be cooking a pork dish with a grape-juice-based sauce that he liked to call Svinjetina u Trsju, or Pig in the Vineyards. “Food has passed through Zagreb for centuries, from both the Middle East and Europe,” explained Chef Baksic. “The Croatian cookbook is an encyclopedia. In Sicily, you have a Mediterranean story. In Croatia, you have a Mediterranean and Continental story. But traditional Zagreb food looks a lot like Austro-Hungarian food. The recipes are a mixture of Austrian, Hungarian, and some from Slavonija, with recipes from the Turks”. One of the biggest differences between Continental cooking and Mediterranean cooking is the base: Continental cooking uses butter and lard while Mediterranean cooking uses olive oil. 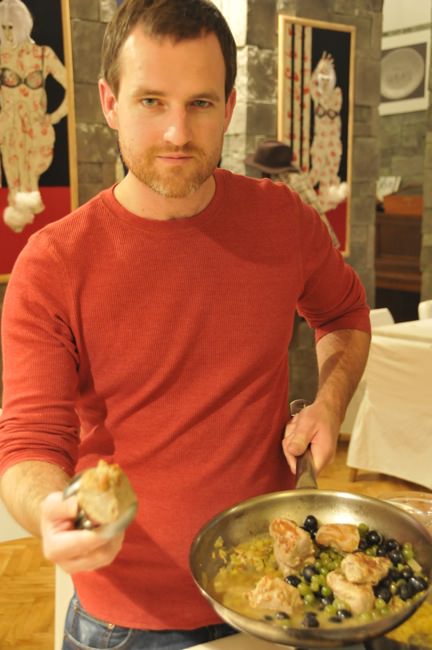 Slavonija is a nearby region of Croatia, and the name, which sounds similar to Slovenia, has confused me in the past. For example, I’ve always thought that the large oak barrels commonly found in Italian wineries were made from Slovenian oak, but they are actually Slavonian oak. Slavonija is the main agricultural region in Croatia, and it provides Zagreb with plenty of corn, which is used to make polenta; and wheat, which is used to make over 50 unique types of bread.

Because we journalists did the cooking, I didn’t get to taste any food prepared by Chef Baksic or Chef Riplia. If they can cook with as much intensity and personal style as they can talk about food, then I expect they create wonderful dishes. Chef Baksic taught me two invaluable lessons, 1) you can stick your finger into a boiling sauce without burning yourself, just be quick about it (I had to close my eyes while he shoved my hand into the pot), and 2) the technique for making pasta dough cannot be taught; the most important thing about making pasta dough is to remember how it feels.

The cooking class at Gastronomadi was the last activity of the press trip, and though I was sad to say goodbye to my fellow journalists, I was excited to strike off on my own into Slovenia, where I would learn about the local cuisine of Piran, a coastal town located on the Slovenian portion of the Istrian Peninsula. Unfortunately, there wasn’t a direct way to get to Piran from Zagreb, and the best I could do was to take a 6-hour bus journey to a town 14 miles from Piran. Hopefully from there, I would find a way into Slovenia.

Where to eat and drink in Zagreb

Klub Gastronomadi
It’s either your style or not: Smoking, stylish semi-erotic paintings on the walls, and talented and passionate chefs. I highly recommend this restaurant if you want to experience the real Zagreb.
Jurišieva 1 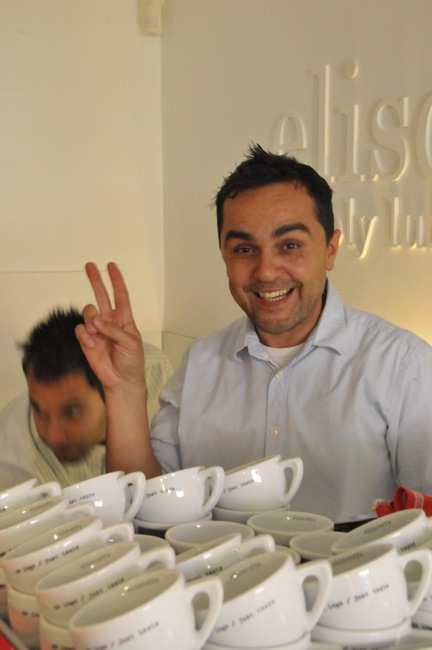 Eli’s Caffe – $
This is the top café in Zagreb, owned and operated by Nik Orosi, the three-time Croatian Barista Champion. The atmosphere is uber-hip yet friendly, and the coffee strong. Find it by looking for the giant sign outside that reads, “Simply Luxury Coffee.”
Ilica 63

Pivnica Medvedgrad – $
This brewpub crafts beer in a wide array of traditional, east-European styles, and the happy hour, which runs daily from 5-8, offers a half-liter for a mere 9 kuna ($1.60).
Ivana Tkalciceva 36

Vinoteka Bornstein wine shop
Simply the best selection of wine in Zagreb. It’s especially great if you’re like me, and you’ve put off buying all those bottles until your last day. I learned later that the oldest bottle of Croatian white wine, bottled in 1947, is on display somewhere in the store. Send pictures if you find it!
Kaptol 19, Zagreb

Hotel Dubrovnik – $$
This hotel is a good value. It’s centrally located on Ban Josip Jelacic Square, the staff is particularly friendly and helpful, the rooms are spacious, and breakfast is decent. Free WiFi.
Ljudevita Gaja 1