Welcome to Cluj, Romania: a city that for centuries has embodied the religious diversity typical of its region, Transylvania. Survey downtown Cluj, Romania, from atop the citadel hill to its north, and you can see churches of six denominations. 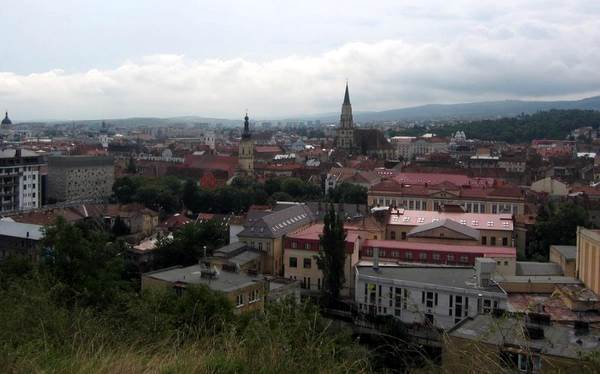 Scanning left to right, you first see the tall domed tower of the Romanian Orthodox church, then the spire of the Unitarian church, which swells into a bulb before rising to a point. Next is the white-topped Lutheran church. Then look into the distance to find the massive bulk of the Calvinist church, before bringing your focus back to the foreground to observe the largest church, a Roman Catholic one. Finally, there is the small gray roof of the Greek Catholic church. 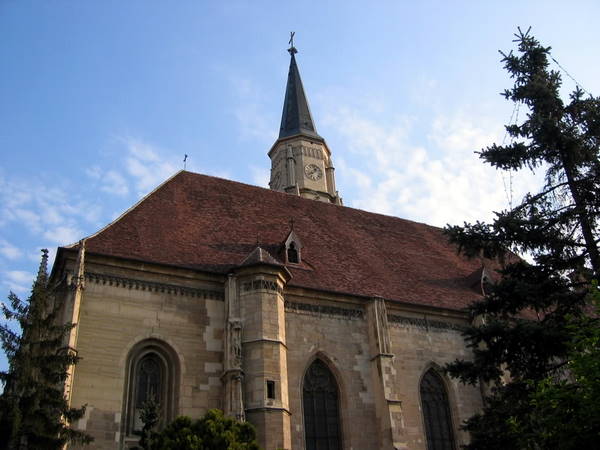 Then, consider that the Unitarian, Lutheran, Greek Catholic and Orthodox buildings are not just any old churches, but cathedrals: the seats of bishops in their respective denominations. 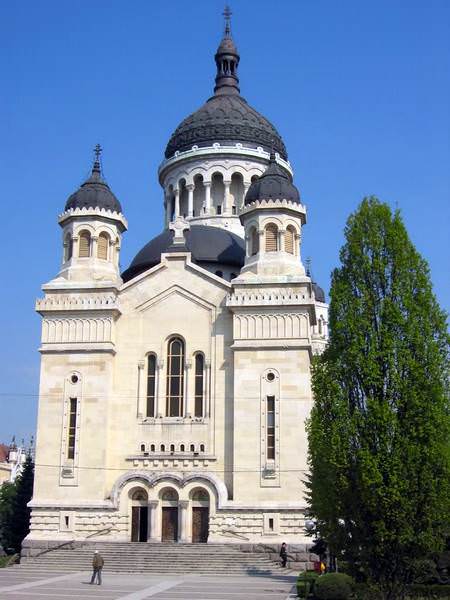 Since it would be overwhelming to tour all these churches in one go, I will focus on the two biggest cathedrals: the Orthodox and the Catholic. The four smaller churches – and a couple of interesting others that don’t happen to be visible from that hill – have their own curious stories to tell, so they will be the subject of a whole different post. 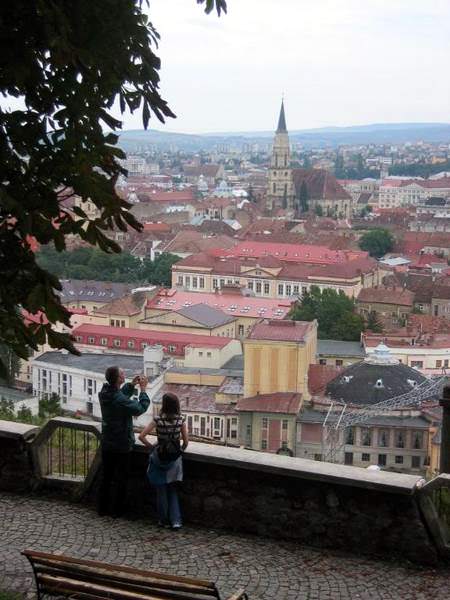 The Orthodox cathedral, with its carved stone facade built onto a skeleton of concrete, serves the Romanian community which, today, is the largest ethnic group in Cluj. It was erected between 1923 and 1933, after Transylvania became part of Romania. Intended as a monument of Romanian national pride, the building has neo-Byzantine architectural features – most notably its central cupola. The church is 64 meters tall and has room for 2,000 worshippers. Its interior dazzles with large mosaics and murals in many colors, with gold predominating. Walking straight ahead from the main entrance, you eventually reach a grand iconostasis with icons arranged in five rows. From the huge alcove behind it, a mural of Mary and Jesus gazes down at you. Hanging far down from the interior of the cupola is a massive chandelier shaped like a crown, which was a gift from Carol II, King of Romania. 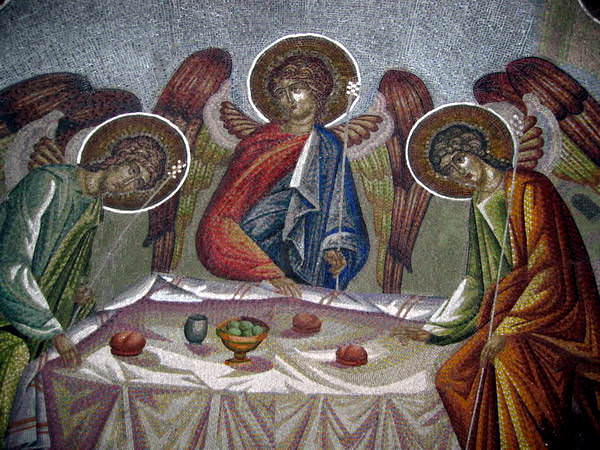 The Orthodox cathedral stands on a square called Piata Avram Iancu, one of the main squares in Cluj. And just a few blocks west is another, similarly sized square, Piata Unirii, home to an older, Catholic church. This, the tallest church in Cluj, is, in fact, the tallest in Transylvania, at 80 meters including the cross on top. The magnificent Gothic church, dedicated to the Archangel Michael, is not a cathedral, because Cluj is not a Catholic episcopal seat but, instead,  falls under the bishopric of nearby Alba Iulia. 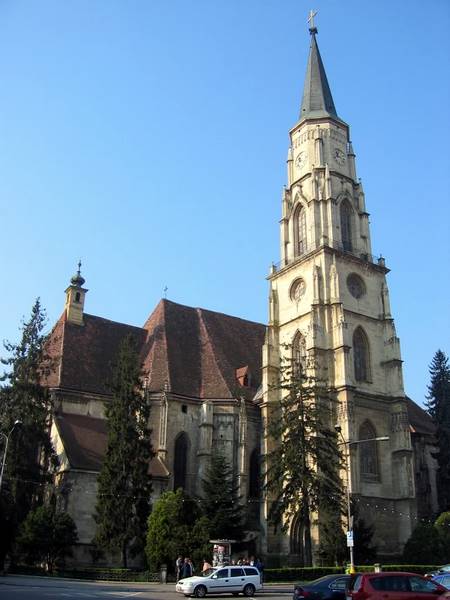 Catholicism made a comeback at St Michael’s after a couple of other denominations held it for a while. In 1551, St Michael’s became a Lutheran place of worship, and then became the seat of a Unitarian bishop in 1566. It has been a Hungarian-speaking Catholic church since 1718. 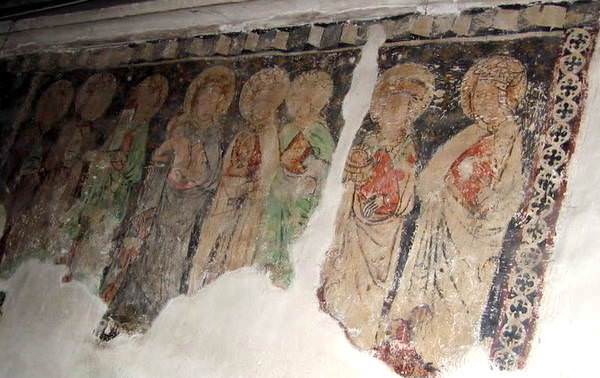 St Michael’s was built between 1350 and 1487, although some of what you see today is reconstruction, including the clock tower which was rebuilt, in neo-Gothic style, in the 19th century. The likeness of St Michael (killing a dragon) above the main door is original. To its left is an inscription in Latin proclaiming that the depiction was installed there in 1444. Still older is the church’s 24-meter altarpiece, made in 1390. The colossal, richly adorned pulpit, carved from wood, is a comparative youngster, dating from 1750. The interior is massive, with huge arches bolstered by two-meter thick pillars separating the side naves from the main one. 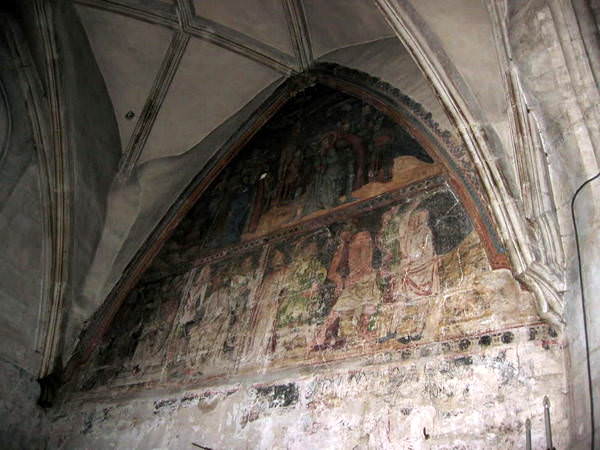 The rich history of Cluj and its diverse population is indeed reflected in the outstanding art and architecture of  every church you visit.

Travel to Transylvania with EarthCam’s live streaming camera. The view is from St. Michael’s Church

Written by David Hill  for EuropeUpClose