While Spain’s Rioja region is famous for its red wine and the Andalusian area of the south is known for its sherry production, the Basque region around San Sebastián has a specialty drink of its own – a tart, vinegary alcoholic cider. 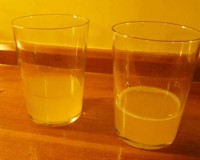 The cider, referred to as “natural” – it is still rather than carbonated – is made from several varieties of apples and has an alcohol content of about 4%. The harvest begins during the last days of September and runs through mid-November. The juice is extracted, fermented and at around the middle of January, the finished cider is available for consumption. Cider has been a part of Basque culture for at least 900 years with almost 60 houses currently producing in the region. A large number of these cider houses are located in the town of Astigarraga, which is easily accessed by car from San Sebastián.

The best time to visit is during the annual tasting period that begins in mid-January and lasts through April. Many cider houses are open for lunch and dinner throughout the year, but during this time you can sample the cider directly from the barrel. The meals offered are basic, usually a cod omelet to start, veal or beef for the entrée and cheese, honey, and walnuts for dessert. Served family style at communal tables, the set price is approximately 25-30 Euros per person. And, included in the cost – all the cider you can drink. Just wait for the loud call of “txotx!”, grab your glass and line up each time for a taste poured from the barrel’s spout. Hold your glass at knee level as the “long pour” allows the liquid to aerate, which releases its aroma and enhances the flavor. Be sure to wear casual clothes as tasting is obviously a messy affair. 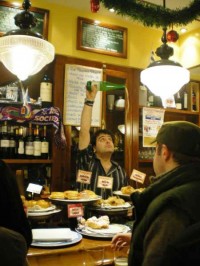 If you can’t make it during the txotx season from January to April, you can still visit a traditional cider house. Meals and cider are still served outside of the tasting season, but the cider will be bottled rather than fresh from the barrel. One of the more famous cider houses that is open year-round, Barkaiztegi, is located on the outskirts of San Sebastián and has been producing cider since the 1600’s. There’s also a cider restaurant in the heart of San Sebastián’s Old Town. While they don’t have a production facility, Sidrereia Donostiarra does serve the traditional cider house meals, plus a few more options, along with bottled cider all year long.

If you can’t commit to a whole bottle and aren’t in the mood for a cider house meal, you’re not totally out of luck. Bars and cafés all around the Basque heartland, including San Sebastián, sell cider by the glass and bottle. Watch as the bartender holds the bottle high above his head and lets the golden liquid flow down into the glass on the bar. Raise your glass with a “ching-ching” (a Basque toast) and drink in this frothy, tangy, fruit treat.