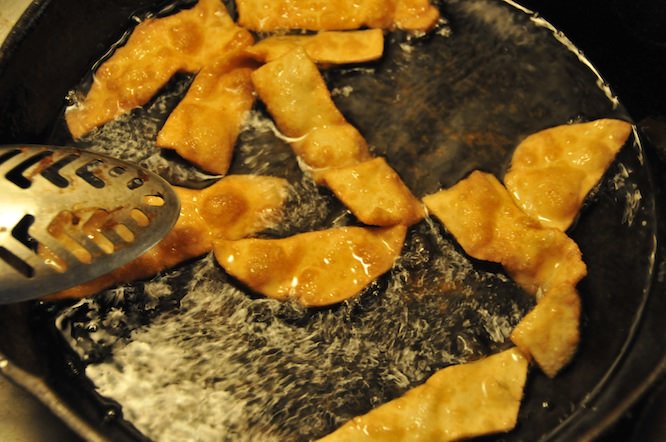 In Puglia, many of the dishes have not changed in a hundred years or more, and the copious local wineries serve wines made from the negroamaro and primitivo grapes. The Awaiting Table, a culinary cooking school, took the time to offer insight into Puglia’s culinary offerings, and it also supplied us with the recipe for ciceri e tria, a delicious, brothy dish of fried pasta and chickpeas. The Awaiting Table offers tour packages that combine cooking classes and journeys through Puglia’s olive-tree-studded countryside and beaches.

The southern portion of Puglia is comprised of a thin peninsula called the Salento penisula—better known as the heel of the Italian boot. The calm blue waters of the Adriatic and Ionian seas lap at the feet of 16th-century towers once used as a warning system for approaching pirates, and vineyards, massive olive groves, and farmland run between the region’s cute little villages—including Alberobello, land of conical houses fit for dwarves. Surrounded by swirling salty sea air and growing up from iron-rich soils, the produce in Puglia just tastes better. 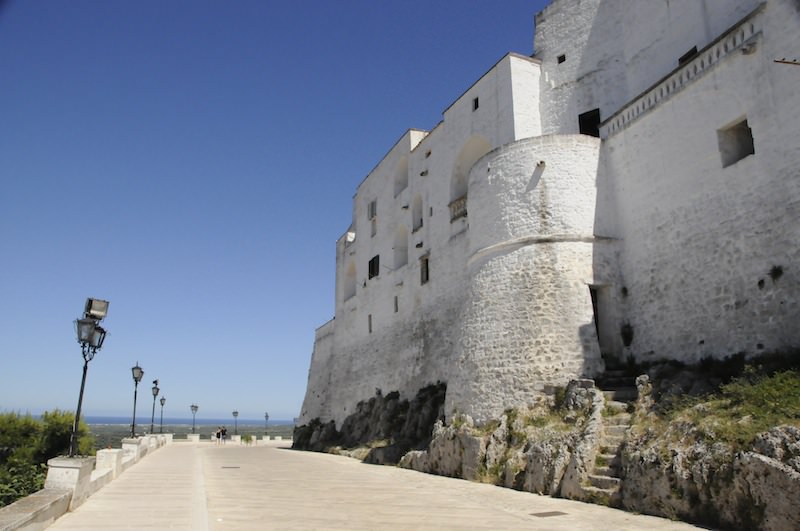 Ciceri e tria is often described as the most beloved dish of Salento, and it reminds me slightly of Pasta e Fagioli, the famous Italian bean and pasta dish called pasta fazool in gangster movies. It has a hearty broth, half of the pasta is deep fried, and the chickpeas provide texture and protein. I can tell you that preparing ciceri e tria using the recipe below will absolutely fill your home with the scents of Puglia. It will be a mini culinary journey in advance of a trip to the region. 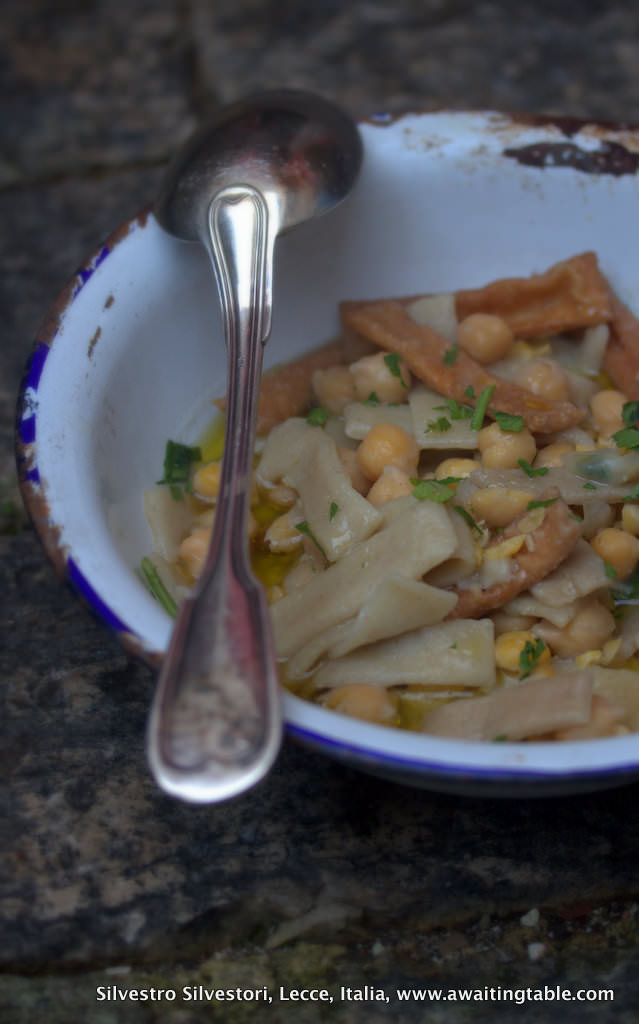 The owner of The Awaiting Table, Silvestro Silvestori points out that le orecchiette, a pasta that looks like “little ears,” is the most famous pasta from Puglia, but he thinks ciceri e tria contains more of the flavors of Puglia. “It’s a brothy, rib-sticker of a dish,” he says, “more like a hearty stew than your average pasta soup.” Silvestro explains that you’d never put cheese on ciceri e tria, nor would you want to add any meat whatsoever. “The fried pasta was originally meant to mimic the texture of meat,” he says, “back when there was so little of it going around in our neck of the woods.” 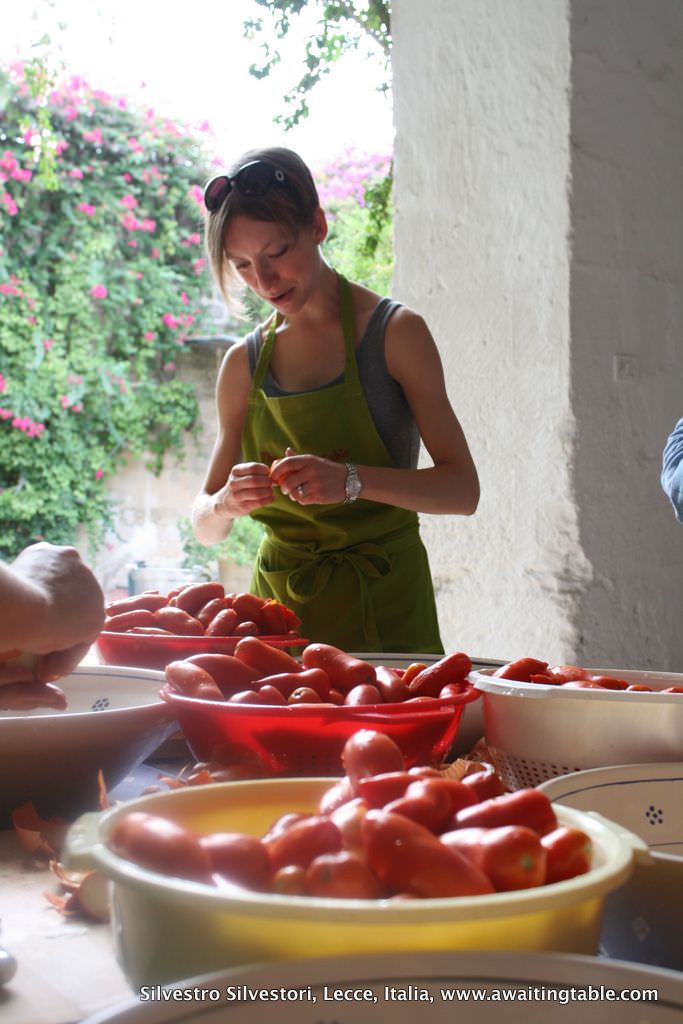 Before receiving this recipe from The Awaiting Table culinary school, I’d unsuccessfully tried making ciceri e tria several times. Seriously, my fried noodles either stuck to the pan or came out greasy. Fortunately, Silvestro has provided us with a few tips that I have since used with success. Pasta is fried differently from kitchen to kitchen, but Silvestro recommends replicating a deep fryer. Find a small pot and fill it with a cup of frying oil (I used canola or vegetable oil, but, in Puglia some chefs deep fry using olive oil!). When the oil is hot enough, fry the pasta in batches of five noodles at a time. I tried it, and this will prevent the noodles from sticking and ensure that they cook evenly. Plus, it’s fried pasta! 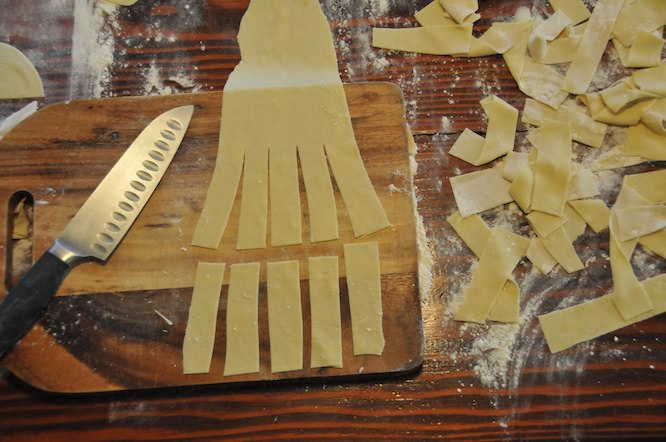 Here is the recipe for ciceri e tria—straight from the deep Italian south. (Ravenous Traveler tested and approved)

2)   Change the water. Rinse. Place the chickpeas in a large pot and cover with water twice over. Add the vegetables and chili. Simmer, covered, until tender and the broth is flavorful. Add water when necessary, you’ll want there to be enough broth to cook the fresh pasta later.

3)   While chickpeas cook, make the pasta by mixing roughly one-third white flour to two-thirds semolina flour and a pinch of salt with water until you reach pasta consistency*. Roll out the dough thinner than a piecrust but thicker than egg pasta. Cut into Band-Aid-size shapes, like 3-inch snips of pappardelle or sticks of gum. Dust with flour to make sure that it won’t stick together, and then dry a few hours.

4)   Once dry, fry about a third of the pasta. Take a medium size pan, add a quarter of a liter of frying oil, and bring to frying temperature. The oil should be about a half-inch deep. Fry in batches of five or so pieces at a time. Once lightly browned and crispy, transfer to a paper towel to absorb extra oil.

5)   Salt the chickpeas to taste, and then remove the carrots, celery, and onions. Return to a boil, and then add the remaining raw pasta. Cook until tender, around 3 minutes. Taste and adjust for salt and chili pepper.

6)   Add the fried pasta, the chopped parsley, and a good glug of extra virgin olive oil to the chickpeas, and then serve in bowls (“Supply helmets if your guests start to swoon,” warns Silvestro).

7)   Wine Pairing: With this recipe, nothing says ‘lovin’ like negroamaro. Many Pugliese wineries sell their negroamaro wines in the U.S. Look for negroamaro wines by Cantele, Leone de Castris, Tormaresca, and Michele Caló e Figli, for instance.

* The Awaiting Table’s original recipe calls for 30% barley flour and 70% durum wheat flour, which is more traditional in Puglia and makes a heartier pasta. I’ve replaced it here because of the difficulty of finding these flours.

Written by Mattie Bamman, The Ravenous Traveler, for EuropeUpClose.com

[...] really loved this recipe for Ciceri e Tria posted by the Ravenous Traveler, Mattie Bamman, who spent a few years in Puglia learning and [...]