You simply cannot see London in a day… or even a week. But, if we had to choose the top London attractions, the following would be on our list:

Founded in 1753, the British Museum is not only the oldest museum in London, but the oldest in the world. Filled with treasures brought from all over the world, the most prized acquisitions are a fine collection of Egyptian mummies, The Elgin Marbles- reliefs from the Parthenon in Athens, and Lindow man – a 2000 year old body preserved by the peat bog acids in Cheshire. This famous London attraction is open daily from 10:00 to 17:30.
Great Russell Street
London
WC1B 3DG

Buckingham Palace, the seat of the British Monarchy, is set right in the heart of London. Buckingham Palace has served as the official London residence of Britain’s sovereigns since 1837. During August and September when The Queen makes her annual visit to Scotland, the Palace’s nineteen state rooms are open to visitors. 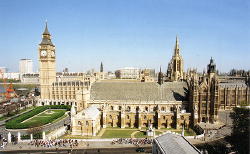 The Palace of Westminster has been the seat of both the House of Commons and the House of Lords since 1512. Entry is through St. Stephen’s Entrance, where you can join a queue for the public galleries, known as Strangers Galleries. Debates in the commons take place on Mon. Tues. and Thurs. from 2:30 pm; Wed. & Fri. from 9:30 am. 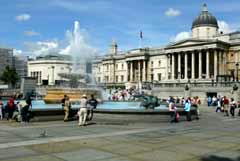 The National Gallery in London houses one of the greatest collections of European paintings in the world. These pictures belong to the public so entering this London museum to see them is free.
Trafalgar Square
London WC2N 5DN

The Natural History Museum promotes the discovery, understanding, enjoyment, and responsible use of the natural world. Explore the world-class collections, fantastic exhibitions and cutting-edge research at no charge except for special exhibitions. This London museum is open 10:00 – 17:50 every day except 24-26 December. Last admission is at 17:30
Cromwell Road
London SW7 5BD, UK

St. Paul’s Cathedral is Christopher Wren’s answer to the influence of Roman architecture in London. It boasts some of the most beautiful and extravagant architecture ever included in one building. There is an entrance fee, but it is worth it.
St Paul’s Churchyard
London
EC4M 8AD

This exquisite museum of British art holds the largest collection of British works from the 16th to the 20th century. There is no charge for the regular collections at the Tate Britain, but an admission fee is charged for major exhibits.
Open daily 10:00-17.50
Exhibitions open 10.00-17:50
Open until 22:00 on the first Friday of each month.
Millbank
London SW1P 4RG

Tate Modern
The Tate Modern is Britain’s national gallery of international modern art. Located in London, this London museum is one of the family of four Tate galleries which display selections from the Tate Collection. This comprises the national collection of British art from the year 1500 to the present day, and of international modern art.
Open Sunday – Thursday 10:00-18:00
Open Friday and Saturday 10:00-22:00
Bankside
London SE1 9TG 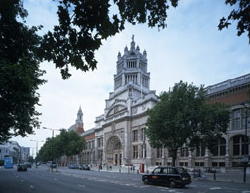 The Victoria and Albert is the one of the greatest museums in London for art and design, a world treasure house with collections of fabulous scope and diversity. The museum holds artifacts, spanning over 3000 years, from many of the world’s richest cultures. The Victoria and Albert is located five minutes from South Kensington Tube Station. South Kensington is on the Piccadilly, Circle and District Line, five minutes from Victoria, 10 minutes from the West End.
Cromwell Road
London SW7 2RL 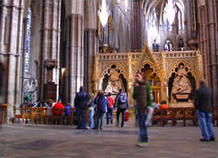 Westminster Abbey is the final resting place for Britain’s monarchs and the site of coronations and other pageants. This London attraction is a medieval architectural masterpiece. Do not miss seeing this national treasure. The museum is usually open daily, including Saturday and Sunday, from 10:30am to 4:00pm.
Westminster Abbey is in the heart of London – next to Big Ben and the Houses of Parliament. Two major railway stations, two London Underground stations ( St. James Park and Westminster) and regular red London buses will take you close to the Abbey doors. 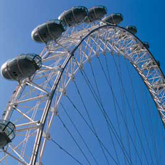 Take a ride on the London Eye and see the city from a new perspective. On a clear day, you can see about 25 miles away from the top of the eye in the comfort of your room-sized capsule. This London attraction is situated on the South Bank of the river Thames, opposite the Houses of Parliament. It is located within easy walking distance from several London Underground stations: Waterloo, Embankment, Charing Cross and Westminster. The ticket office is located inside County Hall, which is the building directly next to the London Eye.
Open daily.

Parks and Gardens
St. James Park lies in the heart of London and is both a wildlife preserve and a relaxing place to escape the hustle bustle of the city.
Hyde Park and Kensington Gardens are adjoining parks that offer the best of both worlds. Hyde Park provides space for sporting events, concerts and a lake for swimming. On the other side of the park is Kensington Gardens, which offers spacious grassy areas, beautiful flowerbeds, and a pond that is a popular winter ice-skating spot.

We have just scratched the surface of the things to do and see in London. There are markets, plays, shopping and lots more that you might want to add to your own list of top London attractions!

Read more about museums in London.

[…] is all but a must-see for all travelers. Check out our Top London Sights  and then explore some day-trips , including a stop at the Neolithic monument […]

Definitely visit Covent Garden. It's one of the most lively and vibrant places in London and has some fo the best street theatre I've ever see. I've heard opera performances there and I doubt I could have heard anything better in an opera house.