Chateau de la Treyne, in southwestern France, is a romantic, fairytale castle in a lovely garden surrounded by forest. My stay there was just about perfect. I’ll try not to gush, but it’s hard not to. I got to play Cinderella and didn’t have to hurry home at midnight. Not until two 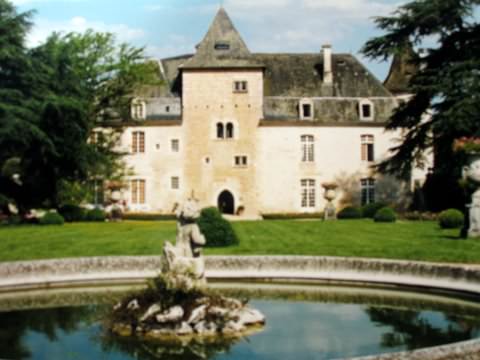 days later did I step back into the mundane world, and since I was in France it still felt magical.

When John and I arrived at the chateau, dusty and tired after touring the countryside, we were greeted by one of the owners, Stéphanie Gombert. Friendly and gracious, she escorted us up the wide stone staircase to a lovely room overlooking the Dordogne River, and by the time we’d cleaned up, sipped glasses of wine on our terrace, and strolled to the dining room, we were completely hooked on the place. 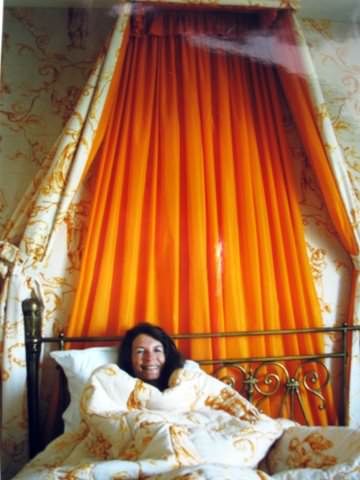 In the public spaces, white stone walls, wooden beams, antique furniture and tapestries create a historic atmosphere, but it’s not stuffy, just richly comfortable and warm. And there are plenty of discreet modern touches such as air-conditioning, satellite TV and free Wi-Fi. The chateau dates from the 14th century, but it fell into disrepair or ruin more than once before the mid-20th century, when it was fully restored. In 1982, Philippe and Stéphanie Gombert took over and made it their passion. Offering 16 rooms and suites, it’s now part of the Relais & Chateaux group.  Need I add that it’s expensive? Unless you have a thicker wallet than mine, this is where you go for a splurge.

Chateau de la Treyne stands on a cliff above the broad, winding Dordogne. It has formal gardens, a tennis court, and a heated outdoor pool, all surrounded by 296 acres of trees. As if that weren’t enough, the hotel has a Michelin-starred restaurant with a chef renowned for his creative cuisine that focuses on specialties of the region. Stéphane Andrieux prepares fish fresh from the river and lamb from the local Quercy sheep. He does foie gras in four different ways, but since I’m not 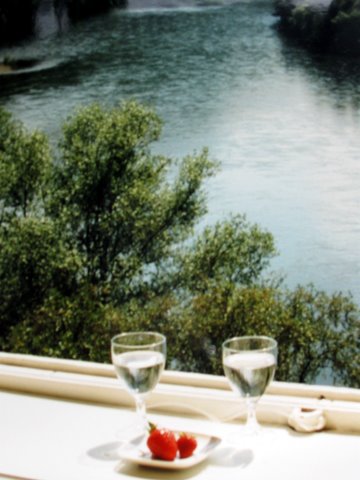 quite ready for raw foie gras marinated in salt, I enjoyed petits pois soup, delicate pigeon, and sorbets. This was in the Louis XIII dining room, where the atmosphere is just what you’d expect: candlelit tables set with fine china and crystal, piano music, and attentive service. In mild weather, meals are served on the cliff-edge terrace. You can eat a fine meal and watch the river glide by.

The chateau is 8 miles from the village of Souillac and about 20 miles from the Brive-Souillac airport.  The Gomberts are happy to advise guests on visiting nearby sites of interest, and they offer trips around the Périgord countryside, which has intriguing caves, museums, charming villages, and many castles. The hours and open dates of the castles vary. A few are:

Château de Castelnau-Bretenoux
This imposing medieval fortress, modified in the 17th century, was the home of a wealthy family until 1715. In the 19th century it was purchased by an opera singer, Jean Mouliérat, who restored and filled it with eclectic furnishings and art objects. It has a chapel and a sculpture gallery, and is also a National Monument of France. 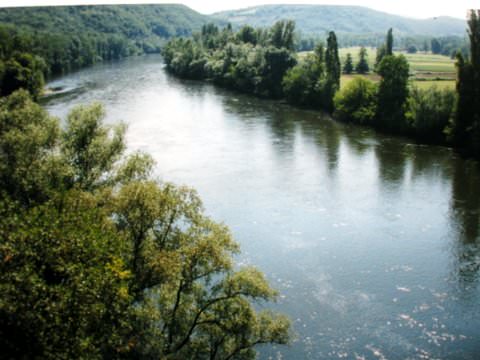 Château de Montal
Built in 1523 by Jeanne de Balsac, Château de Montal was beautifully restored in the 20th century and now is a National Monument of France. The furnishings are from the 16th to 18th centuries and include rare 300-year-old tapestries. It has a splendid staircase and Renaissance interior courtyard with a boxwood maze in the formal garden.

Château de Fénelon
Fénelon castle stands on a promontory above the village of St. Mondane. Originally built in the 1400s, it was redone in the 16th century and its furniture reflects the 15th to 19th centuries. Each room is decorated in a different style. There is also a collection of weapons and armor. The turrets are covered with traditional lauze stones, rare today because of the expense.

Château d’Assier
Another National Monument of France, this chateau is a gem of Renaissance architecture, built in the 16th century by the Master of Artillery under Francis I. It once had four wings; now only the west wing remains, richly decorated with friezes, classical scenes and emblems. Inside there’s a grand staircase, a small museum, and several rooms.

Thanks, Brian. If the dollar starts to go a little further in Europe, American travelers will be happy. As you say, the Languedoc-Rousillon is a wonderful area, and there are many affordable places.

The Euro could well be heading for devaluation with Portugal poised to follow Greece and Ireland. So a Euro currency country may not be such a bad idea.

Like the Dordogne, the Languedoc Roussillon region in France is an amazing place to visit and surprisingly affordable compared to some of the other regions and actually quite close to the Dordogne with many of the same characteristics.