Bastille Day, the French Fête Nationale (National Celebration) takes place each year on July 14th. This day commemorates the anniversary of the storming of the Bastille, an important event in French history. On July 14, 1789, revolutionaries and Parisian common folk stormed the Bastille fortress/prison in Paris. This event has become symbolic of the formation of the modern French nation and the First Republic. 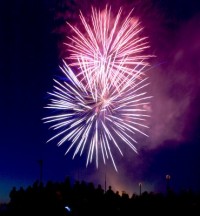 Now that you know a bit about the history, let’s move on to the festivities! My first experience with Bastille Day in Paris was in 2006, when my husband and I spent the summer in France. As I had expected, the Parisians pull out all the stops for le quatorze juillet (July fourteenth).

Our day began with the Bastille Day parade along the Avenue des Champs-Elysées. The annual parade features cadets from France’s top military schools, including the École Polytechnique, Saint-Cyr, and the École Navale. Aviators from the Patrouille de France flying overhead add a special flair to the parade! In years past, France has also invited its allies to march alongside French soldiers. After the parade, the French president typically addresses the press, giving a “state of the union” speech of sorts and hosts a garden party at the Palais de l’Élysée (his residence). Unfortunately, we were not invited!

By far, the highlight of the day was the fireworks extravaganza at the Eiffel Tower.  Following our French friends’ advice, we arrived at the Champs-de-Mars (a large lawn located between the Eiffel Tower and the École Militaire) at 3:00 in the afternoon. Even though the fireworks were not scheduled to begin until after 9:00 at night, at 3:00 it was already difficult to find a good place to spread our blanket.  Thanks to our provisions of wine, baguette and cheese (and the great company, of course) the time passed quickly. Before we knew it, a booming voice came over the loudspeakers, announcing that the show was beginning.  Each year, a unique fireworks display is “choreographed” to a famous piece of classical music.  In 2006, we were treated to truly amazing pyrotechnics accompanied by Mozart, lasting almost ½ hour. 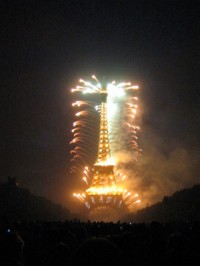 After we made our way through the crowds and off of the Champs-de-Mars, we were pleased to find many brasseries and restaurants open late into the night and offering free or discounted glasses of champagne or wine and casual traditional French fare. We tucked into the cozy Brasserie Jules across the street from our hotel and raised a toast to the country that had shown us such incredible hospitality for the past month.

No European travel plans in the near future?  No problem.  Many French expat communities in the U.S. host Bastille Day celebrations on or around July 14th:

New York City hosts a large Bastille Day celebration each year on 60th Street on the Upper East Side of Manhattan.

San Francisco’s historic French quarter boasts one of the largest Bastille Day celebrations outside of France.

Philadelphia’s Bastille Day, which takes place at Eastern State Penitentiary, features a reenactment of the storming of the Bastille, complete with an East Coast version of  Marie Antoinette yelling  “Let them eat Tastykake!”

If historical reenactments are your thing, you’ll also enjoy Milwaukee’s four-day Bastille Days street festival with a 43-foot Eiffel Tower and a theatrical “Storming of the Bastille” experience.

You got a very fantastic website, Sword lily I found it through yahoo.

I agree with you, Jan! Thanks for your post. Perhaps you could start a new trend in England. I was just in London over the winter and had a wonderful time (as usual). I was thrilled by the Tate Modern.

It's just a shame that the British don't celebrate our great days in such stylish fashion as everyone else does. It's not as if we don't need cheering up with the present credit crunch. We could celebrate a bit more than we currently do. Couldn't we?