In October 2009, Paris celebrated the 120th birthday of the most famous cabaret in the world, The Moulin Rouge (Le Moulin Rouge). It was an occasion for all of us to discover or rediscover the symbol of  Parisian chic. 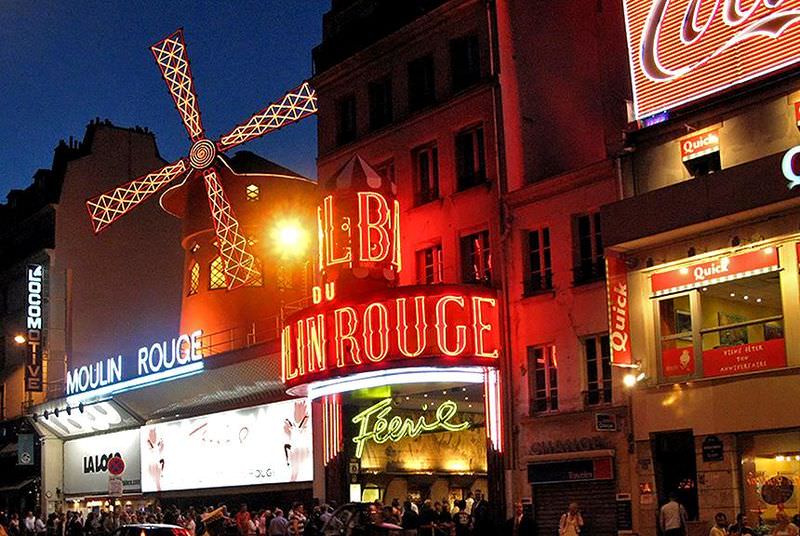 Unchanged as if time had stopped, Le Moulin Rouge stands proudly at 82 boulevard de Clichy in Paris’ Montmatre district, the same site where it first opened. The red wings are still there and the mill man and his wife continue to exchange flirtatious looks. As always, twice a night, every night, guests from all over the world walk through its doors, anticipating an evening of magic.

Les ailes de Montmartre (The wings of Montmatre), as it is affectionately called, was born out of the vision of two businessmen: Joseph Oller, who also owned the Olympia, and Charles Zilder. Both men aspired to build the most grandiose temple of music and dance in the world. They found a spot in Montmartre, the red-light district that was filled with cafes, bars and cabarets and attracted crowds looking for the dazzling and the extravagant. 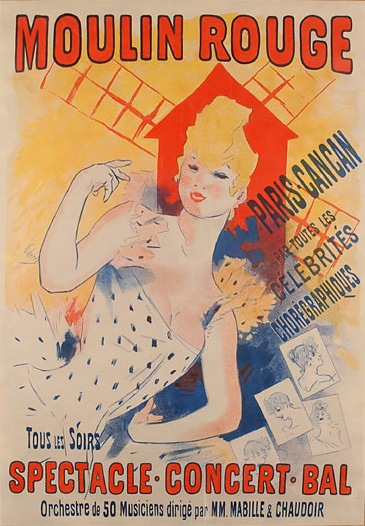 The Moulin Rouge opened on October 6, 1889. Soon after, the public came en mass to discover the extraordinary cabaret with its huge dance floor, mirrors everywhere, and a garden decorated with an elephant. The Moulin Rouge quickly became the “in place”, where people would go to see and be seen. Artists, princes, girls of easy virtue, aristocrats, hooligans, all mingled in an ambiance of sheer euphoria. Soirées, mixing circus, dance and theatre captivated an ever-growing clientele. But, more than anything else, what gives the Moulin Rouge its cachet is the ‘Quadrille,’ an eight-minute dance to a boisterous rhythm where young women lift their legs showing their—underskirts. The erotic, somewhat scandalous choreography enthralled the public. When they discovered it, the British were totally taken with the ‘funny, loud dance that came from France.’  They baptized it the “French Cancan.” More than 100 years later, the show continues, featuring the Doriss Girls, the world’s best French Cancan performers.

Over the years, the show has evolved into spectacular revues. In the 1960’s, after the huge success of Frou-Frou, the director of Le Moulin decided to name each new review with a word beginning with the letter “F”.  This goes for the current show, Féerie, featured since 1999. The average life-span of  a Moulin Rouge revue is 10 years. Most nights are sold out with an annual attendance of 600,000 spectactors. The huge success of Le Moulin should not come as a surprise, knowing what goes into the spectacle.

Eight million Euros were invested to create Féerie. For each performance, about 100 performers wear 1000 costumes made of feathers, rhinestones and sequins, while strutting around in 800 pairs of custom-made shoes. Le Moulin hires only top designers to create these fabulous costumes and each show includes performances from international artists of exceptional talent. 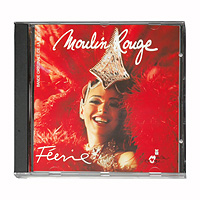 The show, Féerie, will truly take you into a fairy world. It comprises four parts and includes: The Moulin Rouge Today,Yesterday and Forever; Sandokan (the adventures of a pirate in Indonesia); The Circus (the circus comes to town with its parade of clowns, acrobats and six miniature horses); and The Moulin from 1900 to…. a tribute to women’s beauty. And you will hold your breath when a woman dives into a giant aquarium with 40 tons of water and five pythons and twists and twirls her body with amazing grace and, apparently, no fear.

To honor this big birthday and for the first time in its history, the Moulin Rouge has launched its own line of accessories – shoes, bags, jewelry inspired by the peformer’s costumes, and gadgets in the Belle Epoque style.  During the day, you can browse through the collection at la Boutique Souvenirs, 11, Rue Lepic.  If you attend a show, you will have access to the Boutique Salon Toulouse Lautrec.

Practical Information:
Interested in a soirée at the Moulin? You can either see the show only (the cost is about 100 Euros per person and includes a half-bottle of champagne) or indulge in the full treatment with dinner and dancing (the cost ranges from 160 to 180 Euros per person.)
Address : 82, Boulevard de Clichy
Metro : Pigalle, Blanche, Place de Clichy