The beauty of Lisbon had captured our hearts and souls on more than one occasion, but the not so distant gems to its immediate west – the inviting, though as yet unexplored Estoril coast – remained all but a relative unknown.

On a return jaunt to the stunning Portuguese capital last month, we ventured out on day trip from Lisbon to finally explore the ‘other side’ of Lisbon – a stunning coastline dotted with charming historical towns, not least of all, the rich seaside fishing village of Cascais. Find out why Cascais is Lisbons popular beach getaway – and for good reason!

If you want something a little more relaxed, you can also take a look at these Yoga Retreats in Portugal – some of them are located near beautiful Cascais. 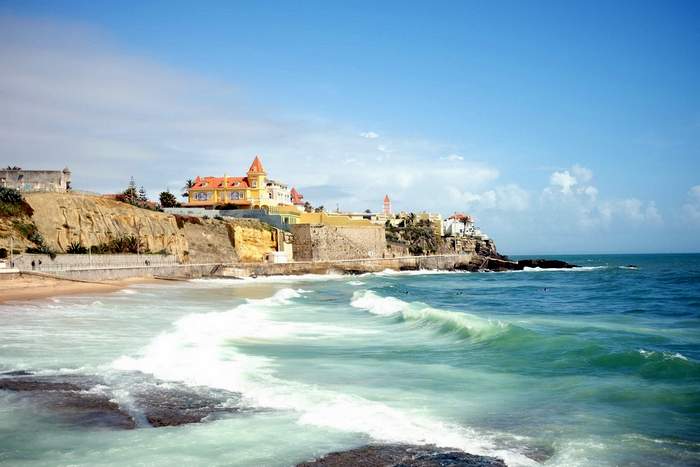 There’s good reason why Cascais is considered Lisbon’s popular beach getaway. Easily accessible within a mere 40-minute train ride from Lisbon’s Cais De Sodre station, Cascais is an elegant, charming spot, home and refuge of well-to-do Lisbonites, expats and tourists ever since Portuguese King Luis I set up his summer residence here in the 19th century. Today, Cascais is evermore the inviting hub, a place where rich manors and leafy strands fuse with the scent of fresh seafood and sea air.

Arriving by car after a seafood-laden jaunt along the southern Alentejo region, we set up shop for the week in our humble, well-positioned Air B’nB on Rue De Modra, well within walking distance of the town’s action: serpentine old-town laneways that brood under amber spill after dark; countless high quality restaurants and cafes; all the major tourist sights near and along the southern foreshore. 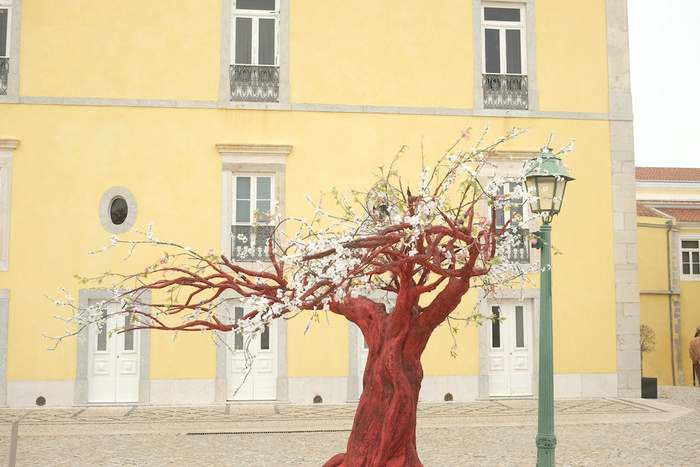 Initial impressions led me to wonder whether Cascais might be best thought of as a mini, affluent, old-money version of Lisbon – close enough to be an extension of the capital, far enough away to feel like an escape.

Weaving our way through throngs of bus-in tour groups and restaurant touts along the Alameda da Grand Guerra, we took in the relaxed scene of harbored vessels and fishing crates along the Cascais Marina, where ornate, charming 19th Century buildings coddled the town’s iconic ‘postcard’ spot, Praia da Ribeira (aka Praia do Peixe), a small sandy cove by the Passeio Dom Luis I. Spring swimmers pre-empted warmer months, boldly lapping about in the frigid waters (a bit too chilly for us). 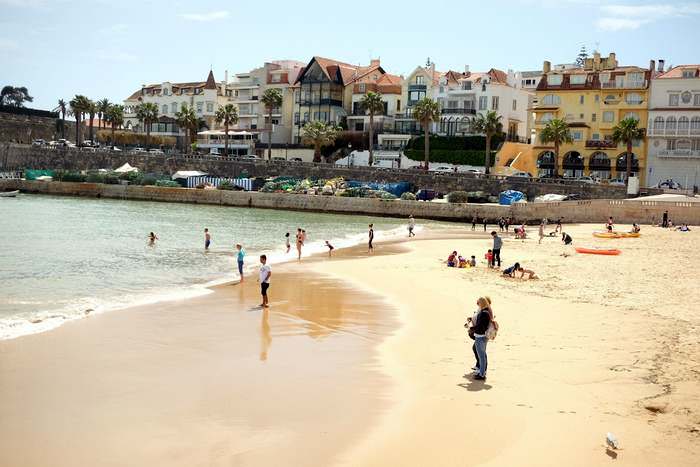 We ended up at the base of the lofty Cidadela de Cascais – a 15th century fort (now hotel) that once guarded the western end of the Tejo estuary – and beyond its walls, the impressive Centro Cultural de Cascais, a former convent-turned art museum. 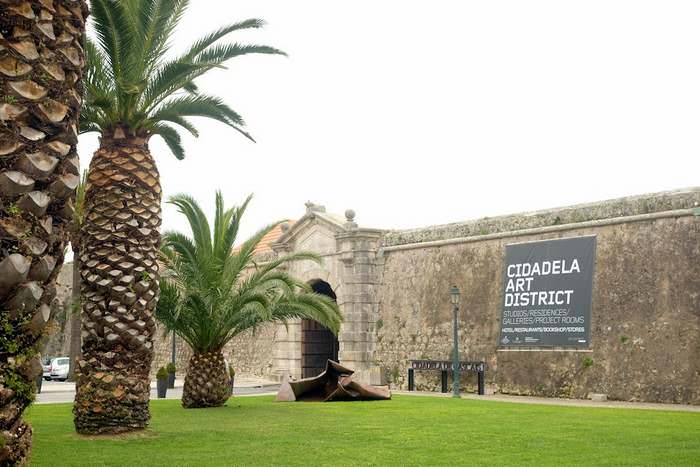 Conveniently, most of the town’s major historical points of interest can be found here by the southern shoreline (and if not, merely a short walk away). Add to the list: the Casa de Santa Maria, a grand 19th century Cascais residence, perched immediately next to the iconic blue and white Santa Marta lighthouse. 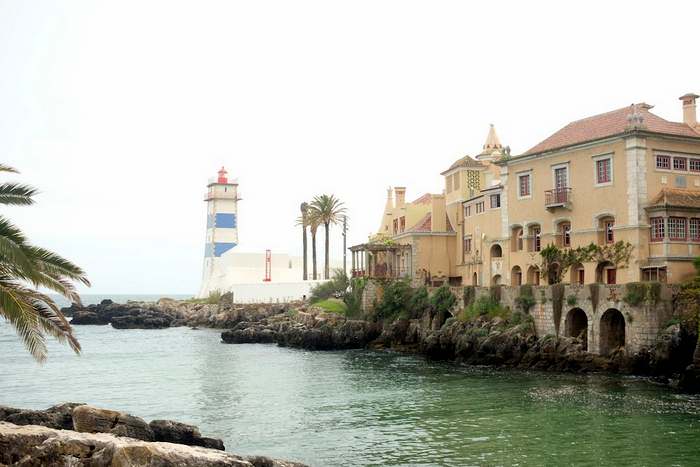 Lured by the stunning yellow Condes de Castro Guimarães, we moseyed further up and along the coastal trail to the infamous Boca De Inferno (‘Mouth of Hell’) a collapsed cave and rock formation where heavy seas pummel the cliff edge, and the spot where occultist Aleister Crowley attempted to fake his own death in the 1920s.

Though we didn’t take advantage of it, the 15-minute walk from Cascais center to the Boca might have been even more enjoyable on bicycle – the entire 8 km stretch from Cascais to Guincho beach is well attended with purpose-built bike lanes, with ‘Bica’ bikes easily rented throughout town for the half-day trip. 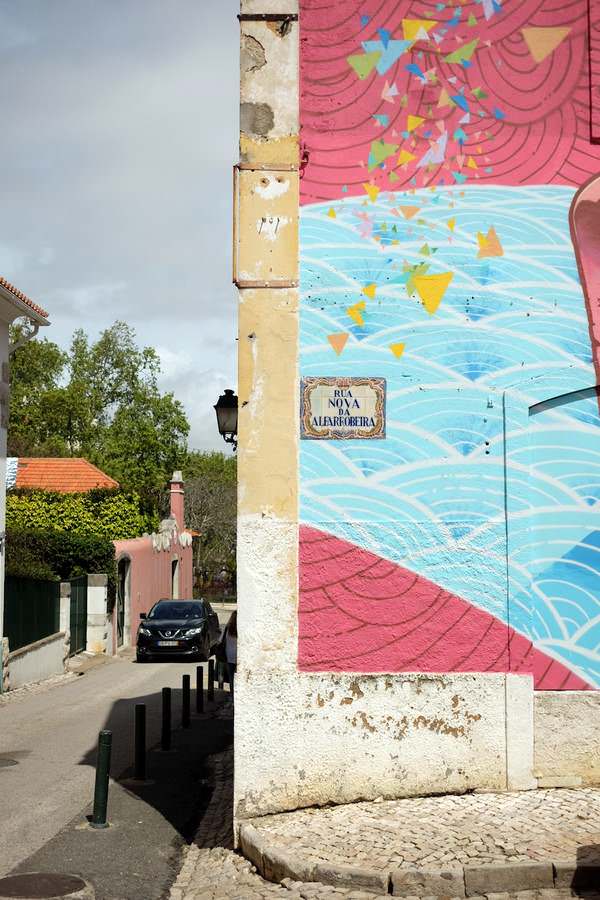 Come nighttime, Cascais slips into an even sleepier mode. I imagine summertime might see a spike in activity, however during our relatively weary spring moment, the somnambulant village was completely ours.

Though the town offers a range of fine authentic Portuguese restaurants, including Restaurante Dom Pedro I, and Jardim dos Frangos (to name but two) our most memorable meal was actually enjoyed at a place called Moules and Gin, a well-appointed modern eatery serving fresh local mussels in a variety of delicious sauces, from hot chili to Thai coconut (as well as an excellent array of gin cocktails). 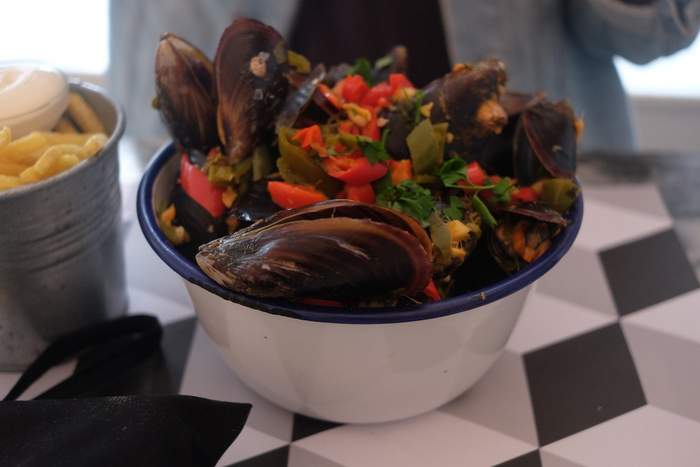 With a week to spare in Cascais, we woke late each morning to the moody spring sea weather, with shards of sunlight warming us by the cute terrace café by the green square at Jardim Visconde de Luz, where we enjoyed the local specialty: warm pasteis de natas and delicious 60-cent espressos.

Considering that we’d eaten little other than pork, pastry and seafood since setting foot in Portugal a fortnight prior, and were thus famished for vitamins and leafy greens, we set out to track down some ‘healthy’ lunch options, and thankfully succeeded.

With its decadent supply of fresh juices and tostas, A Mercearia was a nourishing highlight, so too the highly recommended House of Wonders, a tri-story terrace eatery offering fresh juices and a delicious vegan lunch buffet. 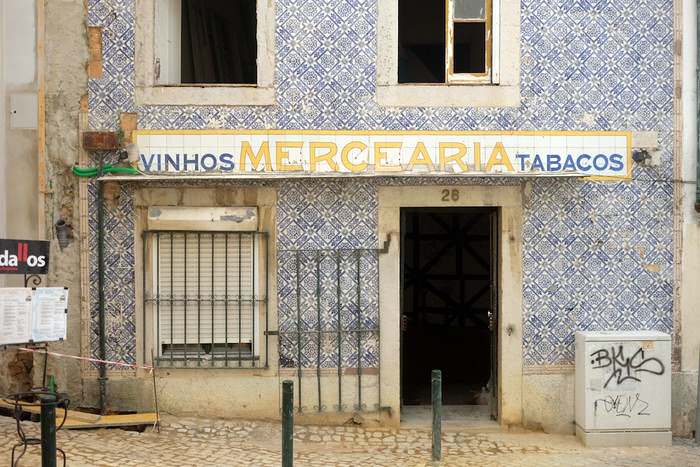 Our showpiece moment came on the last day – a particularly sunny one – perfect chance for an extended stroll from Cascais along the eastern foreshore to Estoril. The coastline was stunning, with bars and cafes luring us in at every turn, young surfers riding the hefty barrel swells, and 19th century buildings sitting monumental along the cliff tops above. 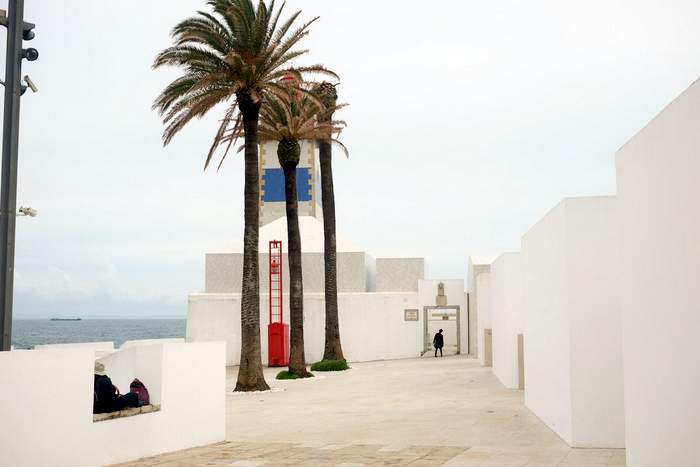 Side view of the Santa Maria lighthouse

Refreshed, rejuvenated, relaxed, a week in Cascais was the perfect place to drop the pace another step. With bellies content, skin kissed by the spring sun, we trained again back to charming Lisbon, relishing in our encounter with the Town of Kings and Fishes, promising a return.

Cascais: Lisbons popular beach getaway was written by and photos by Cam Hassard for EuropeUpClose.com