Opera singers coming up from manhole covers, serenading crowds from second-story windows, harmonizing on mountaintops, and vocalizing in vineyards. Flash mobs in public squares and live jukeboxes on busy corners. Brass bands in markets and melodies in museum courtyards. In only one place in the world do all these things happen on the same day, and that place is Brescia, in northern Italy. Since 2011, the city has hosted La Festa dell’Opera (Brescia opera festival) one day every September. It is free to the public and offers nonstop aural – and visual — delights from 6:30 am till midnight. There were more than 50 separate events during its iteration on September 17, 2016, and over 30,000 visitors came to enjoy the spectacle. 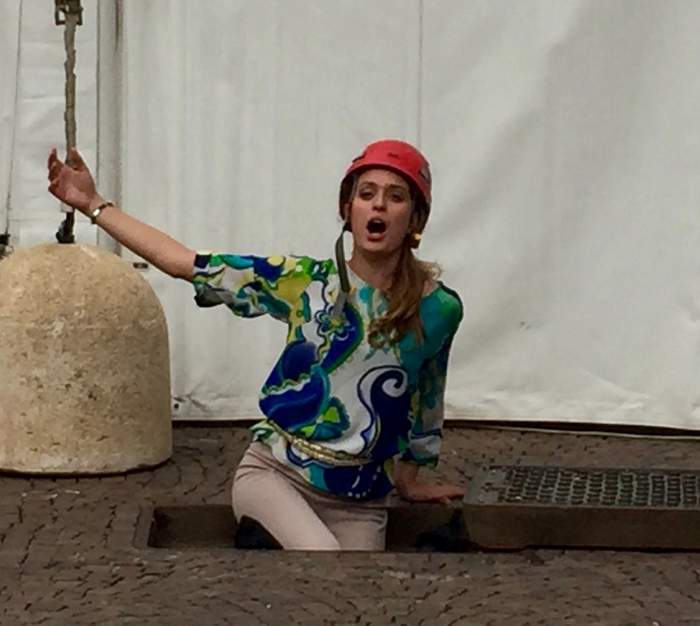 A soprano emerges from underground and bursts into song.

Brescia isn’t known as a city of opera as is, for example, Milan (La Scala), Verona (the Arena), or Lucca (native son Giacomo Puccini inspired its Puccini Festival). But Brescia has a stunning opera house of its own, Il Teatro Grande, whose horseshoe-shaped concert hall was based – perhaps — on the design of La Scala, built two decades earlier in 1778. Il Teatro Grande has not only deep cultural roots in the city, it has a dynamic director, Umberto Angelini, who encourages innovation in Brescia’s musical life. Add to this the need for opera houses everywhere to create tomorrow’s audience, and the desire by Brescia’s authorities to encourage tourism, and voilà, the Brescia Opera Festival was born. It takes place within the context of 10 days of classical music, echoing Brescia’s 10 historic days of resistance against Austrian rule in 1849. 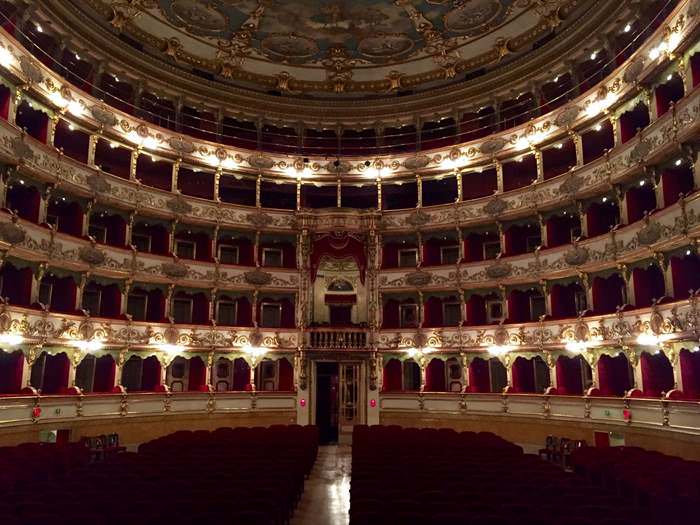 The opulent interior of Teatro Grande.

Each Brescia Opera Festival starts at dawn in a suggestive outdoor setting, and ends in another one at midnight, weather permitting. In 2016 the opening was at the Convento dei Padri Carmelitani Scalzi by Brescia Castle. The finale was scheduled to be held amid the ruins of the city’s spectacular Roman Capitolium, but inclement weather intervened, so the Teatro Grande was quickly substituted. 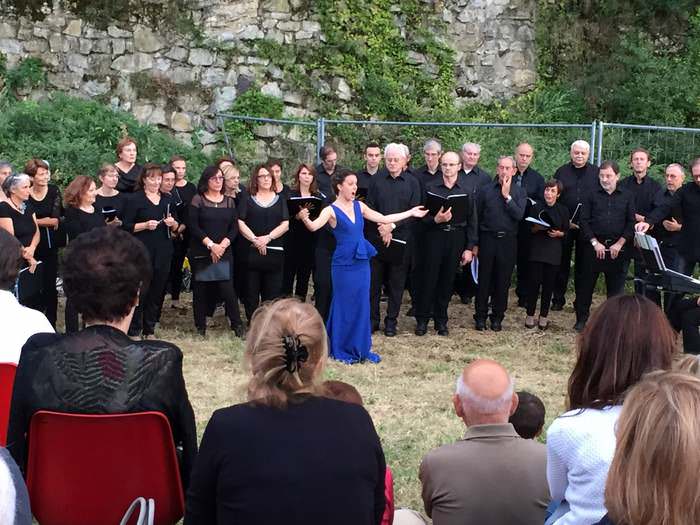 A chorus emotes below Brescia Castle

Every year the festival organizers earmark up to 50 locations that take advantage of Brescia’s natural and architectural treasures, that make the city itself sing. The newest of these settings in 2016 was Brescia Underground, a series of waterways and tunnels beneath the city proper. So, Annalisa Ferrarini, an exuberant soprano sang a cappella while standing in a watery trench, wearing high rubber boats, visible only by torchlight, while her audience crowded on damp walkways, clutching walls and each other to keep from slipping into the water.

High marks for atmosphere, but some anxiety by both singer and spectators. Equally atmospheric and less stressful was the early evening chorus assembled in the Vigneto Pusterla (Pusterla Vineyards) just below Brescia Castle on the hill overlooking the city.If both these locations sound too challenging, you can simply wander the streets of Brescia during the day. A flash mob in a courtyard, a lover’s duet trilled from a 4th floor balcony, an impromptu aria in a museum mean you literally cannot escape the sound of music on this one day. 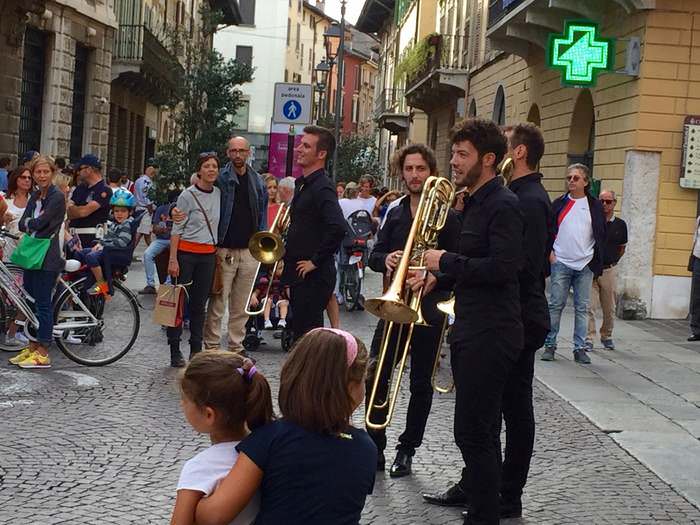 An impromptu brass band in a city piazza, to the delight of onlookers.

Perhaps the richest experience, musically speaking, is the “opera ridotta”, an abbreviated opera performed recital-style in the elegant foyer of Teatro Grande. It is one of the few events for which you must order tickets ahead of time. There is no charge for them, but advance reservations are necessary because of limited seating space. 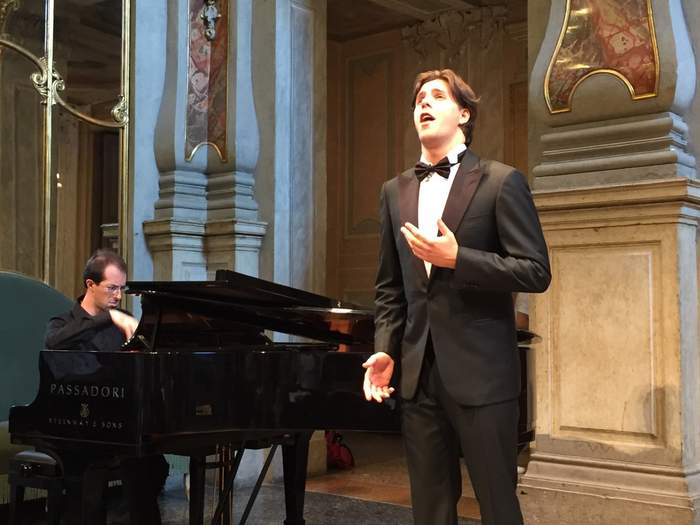 Elisir d’Amor done in recital form, with acting and costumes worthy of a full-scale production.

The opera in 2016 was Donizetti’s Elisir d’Amor, and it was splendid. A narrator explained – in Italian — the plot between arias. The acoustics were clarion. A skilled pianist accompanied the five singers, who were all in costume. None is a headliner at La Scala (yet) but all could hold their own, singing and projecting beautifully, not only in the theater but throughout the day on, above, and beneath the streets. This particular audience was older than the average festival visitor, but there were a few well-mannered children with legs dangling on their chairs, listening intently. Not one shed a furtive lacrima during the 75-minute show. Next year might be your turn to visit the Brescia Opera Festival.