Barcelona, a paradise for night lovers? Yes, but the Catalan capital has plenty more to offer. Let us explore some local hot spots.

Housed in a 19th century building, the Boqueria market is one of Europe’s oldest markets. With its overflowing stalls of fruit, vegetables, flowers, nuts, candies and breads, and cases filled with meat and fish, the Boqueria is a must-see for any epicurean. You will find the best products that exist in the region, all arranged in spectacular displays. A word of caution: don’t reach out to grab some fruits or vegetables for the vendors to weigh.  They’ll disapprove. Rather tell them what you want and they will pick it up for you. One fun way to discover the market is to tag along with the local shoppers. They really know how to pick their produce and you’ll learn a lot about the ingredients that give Mediterranean food its fabulous flavor. Another way to take in the ambiance is to sit at one of the many tapas bars. They serve a tantalizing selection of plates – bocadillos (small sandwiches) of jamon Serrano – cured ham, to zarzuela (a seafood medley).

How to get there: Located about halfway down La Rambla, the Boqueria straddles the area between the Barri Gotic and El Raval. You can’t miss the arching steel entry gate or the crowds flocking inside. Metro L3, direction Liceu.

An Afternoon at the Beach

Just ten minutes away only from the city center, an immaculate strip of white-sand beaches awaits you. Platja de Sant Sebastiá and Platja de Barceloneta are the two closest beaches to the city center –which makes them a perfect destination if you are looking for a change of atmosphere. Besides swimming or sun-bathing, you’ll find plenty to do from playing volley-ball to kite-surfing. If you’d like to sip on a refreshment or grab a bite to eat, you can head to one of  the “chiringuitos” (basically a hut with a bar). 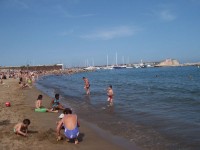 The quickest way to get to Barceloneta beach is to catch the yellow line metro and get off at the Barceloneta stop. Alternatively, you can do as many of the locals do and walk. It will take you about 20 minutes from the end of La Rambla. If you choose to walk, there are some great views en-route. You’ll see the “Monument a Colom” a memorial to Christopher Columbus. A little further along is the Port Vell de Barcelona, a picturesque port with a beautiful view of the sea and marina.

Leave the touristy Rambla behind and mingle with the artsy crowd at El Raval, one of the two historical

neighborhoods bordering the Ramblas – the other one is the Barri Gothic.    Once a red-light zone, the working-class neighborhood has become the ‘in area’ since the building of the MACBA, the museum of contemporary art.   With more than 2,000 works by Catalan, Spanish and foreign artists, MACBA attracts visitors from all around the world. Trendy cafes, restaurants, art galleries and designer studios have followed in the wake of this must-see spot. Furthermore, in some of the backstreets you may find bars such as the Bar Pastis, the London Bar or Marsella that trade on their former reputation as bohemian hangouts. El Raval is alive through-out the day and night.

How to get there: El Raval is within walking distance of popular areas such as the Gothic Quarter and Eixample.  The nearest metro stops are on Las Ramblas.

Hi, I am sorry you had trouble with the hotel booking section. I was able to get the information by putting in the dates in this format: 04/20/09. We will look further into the issue and make sure it is working properly.

The " Find a Hotel " option on the main page does not offer a date input option. What is the correct format ? I tried several and failed.