The plane is descending, flying low over a volcano. Steam rises. Cat, my youngest daughter, is excited. “Look, you guys! The earth is boiling.” And it is! Like the other islands of the Azores, Sao Miguel is volcanic. It’s also verdant and utterly beautiful. The Azores Archipelago is in fact the visible part of the Atlantic ridge, some of the highest mountains on earth, measured from their foundation deep down in the Atlantic. 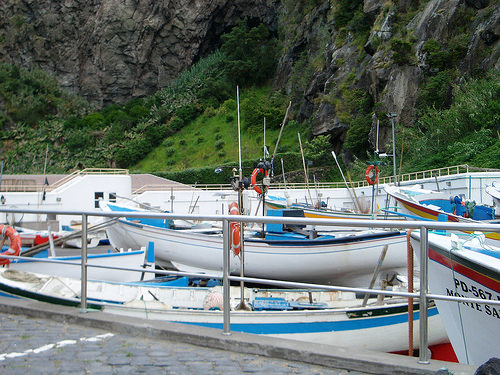 A few minutes later we land in Ponta Delgada, capital of the largest island, Sao Miguel. Since the early 1400s, this archipelago has been a part of Portugal, attaining status as an autonomous region in 1976. The Azores, comprised of  nine islands ranging in size from 270 sq mile, Sao Miguel, to little Corvo, only 7 sq miles, is our destination.

About halfway between England and the Americas, the Azores is a popular stop for trans-Atlantic sailors. The port of Horta on the island Faial is a good example of this. Horta’s sea wall is covered in paintings and graffiti as sailors through the ages have left their mark.

Back on Sao Miguel, we travel towards the caldeiras (hot springs) of Furnas. It’s as if a giant cauldron is simmering deep inside the earth, forcing muddy bubbles to the surface. Occasionally, a geyser erupts, sprouting boiling hot water. The surrounding valley is vibrantly green. Flowers of every imaginable colour abound. From above, Furnas looks very mysterious, all covered in mist. 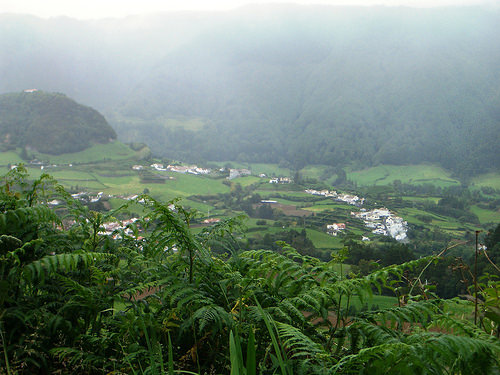 In Furnas, we try cozido, a dish of pork, turnips, carrots and sausages, all cooked together in a pot buried deep into the earth and left to simmer for 6 hours in the sulphurous heat of the volcano. Delicious! Furnas is also where you can shake 20 years off your life by swimming in the iron-rich lake in Terra Nostra Park. The girls fret a bit; the lake has a yellow, muddy colour. “Eww!” Also, the idea of becoming younger is in no way appealing. “20 years! We wouldn’t even be born yet,” jokes Alex, my oldest. But curiosity gets the better of them. Soon they’re both splashing in the warm, muddy water. 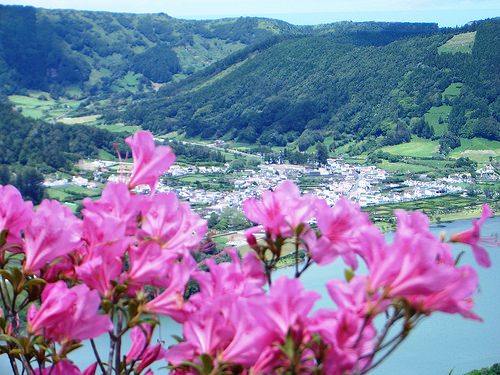 At Sete Cidades, legend has it a beautiful blue-eyed princess once fell in love with a handsome green-eyed shepherd. “Not suitable at all,” said her father, the King, and the young lovers were forced to part ways. On their last meeting, both wept so much, two lakes were formed: one green and one blue. The twin crater lakes by the seven little villages – Sete Cidades – are best viewed from the vantage point near the ghostly hotel, Monte Palace, where the only ones about are two fierce dogs on leashes, left to protect the abandoned hotel. Meanwhile, Cat becomes fast friends with a much friendlier stray dog.

Capital of Sao Miguel and of the entire archipelago, Ponta Delgada is a pleasant port city, very Portuguese – with nice little cafes and shops. The streets are narrow, the sidewalks narrower still, sometimes just centimetres wide; not very handicap- or baby stroller friendly. Shopping is never a major goal of travelling to the Azores, but there is an upscale shopping mall, Parque Atlântico, in which we spent far too much time for my taste. But travelling with kids inevitably involves compromises. And, it must be said, the mall does have nice shops. 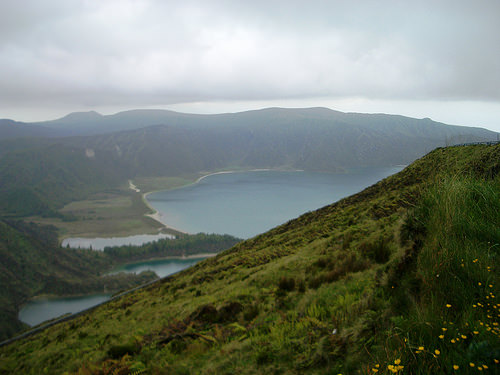 Going up to Lagoa do Fogo one day, we’re again met with fantastic views of a large sapphire lake at the bottom of an extinct volcano. Ambling back down the path, through tropical vegetation, we pass a group of Azoreans swimming and playing in yet another hot-water pool; with rejuvenating properties no doubt. Here at Caldeira Velha, a stunning natural waterfall cascades into the pool.

Volcanic activity is very apparent on the island. One night, the earth moves. Not very much. Just enough to shift the position of the pictures on the walls and to tip a few carelessly placed items off the table. If you’re from California, you would likely shrug it off and continue the conversation. As do the islanders. Our pink hotel, the Bahia Palace, is beautifully situated in Baia d’Alto, just metres from the Atlantic Ocean. It is also full of Scandinavians on holiday. In Scandinavia, natural disasters (or any kind of disaster) are few and far between. Down in the lobby, a few anxious Swedes have gathered to find out what happened. The receptionist laughs. “This happens all the time,” she says in charmingly lilting English. “Little quakes are good for the earth,” she continues. “Just like people, she likes to let out a little steam now and then.” 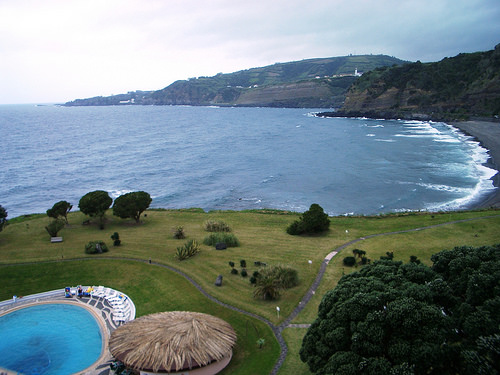 A Swedish woman is not convinced. The tsunami in Southeast Asia is on her mind. Three days later, we meet her at the airport. She hasn’t slept for 72 hours and looks frazzled. In case a big earth quake hit, she wanted to be prepared.

“Hope you get a nice, long nap on board,” I say as we head for our different gates. “Not much chance of that,” she replies. She’s terrified of flying, especially over water.

Initially I laugh. The way people who aren’t too bothered by irrational fears laugh. How silly to worry about something beyond your control. But then I decide she’s actually a brave woman in her way. After all, it’s not brave if you’re not scared.

Kim, Rob and everyone: Thanks for kind words. The Azores is indeed a beautiful archipelago.

This is a great highlight of a few of the best places to visit on Sao Miguel. Well done.

Searched for the Azores, since I'm going there soon, and found this. Great article.

Excellent article. Thanks for spreading the word.

A travel report with food. Not only do I want to go there, after reading this, I want to try the cozido, too !