Situated in the middle of the Atlantic Ocean, the  Azores Islands are the very top of one of the earth’s tallest mountain ranges, the Atlantic ridge. With a temperate climate year-round, this rugged and verdant volcanic 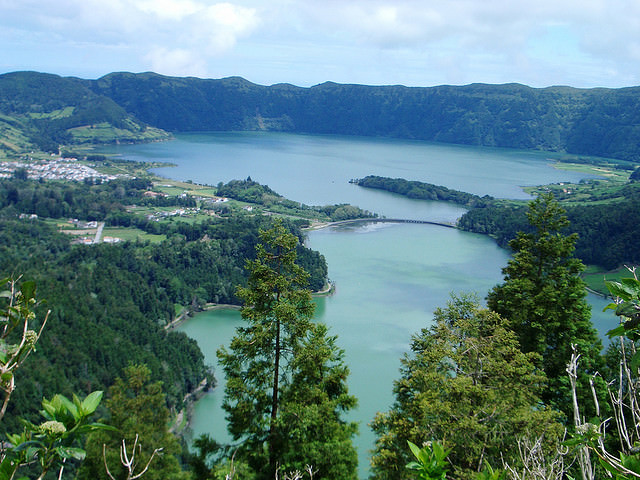 The islands form an autonomous part of Portugal.

Getting There and Getting Around 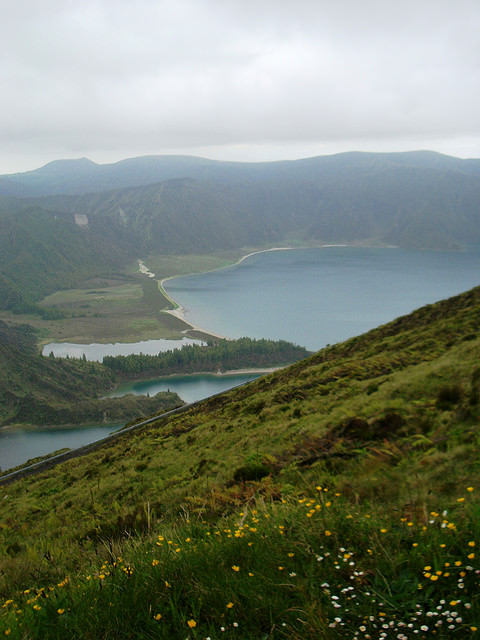 The Azores Islands can, of course, be reached by boat, and the port of Horta is a classic stop for trans-Atlantic sailors. Even Christopher Columbus stopped by the Azores on his way home from the Americas. But today, most people arrive by plane, often through Lisbon, located about 900 miles to the east. TAP Air Portugal flies daily from Lisbon to the islands of Sao Miguel, Terceira and Faial, and weekly to Pico. Tip: If you’re in Europe, check out charter holidays as they’re often a very good value. From Norway, I’ve often seen flight/4-star hotel-packages for as little as 350 USD for one week. From North America, SATA offers direct flights from Boston, Oakland (CA), Montreal and Toronto. However, be warned that summer flights sell out quickly, often requiring a booking as long as 10 months in advance.

In the Azores, Azores Express/SATA offers frequent flights between the islands. A cheaper and more enjoyable option, though, is the inter-island ferry service. Regularly scheduled ferries ply the waters between Sao Miguel and most of the other islands, as well as between Terceira and Graciosa. The two westerly islands, Flores and little Corvo, are a little less accessible. Auto rentals are available on all nine islands.

Things to See and Do in the Azores islands

The Azores’ major draw is nature. It’s an excellent destination for the active, exploring traveller, but also for visitors interested in bird watching or a leisurely round of golf. The islands offer mountain climbing, hiking, biking, horseback riding and more. All kinds of water activities are available, including sailing, diving, sea kayaking, canoeing, swimming with dolphins, whale watching and big game fishing. In the eastern island group, Santa Maria is home to exquisite bays and beaches. 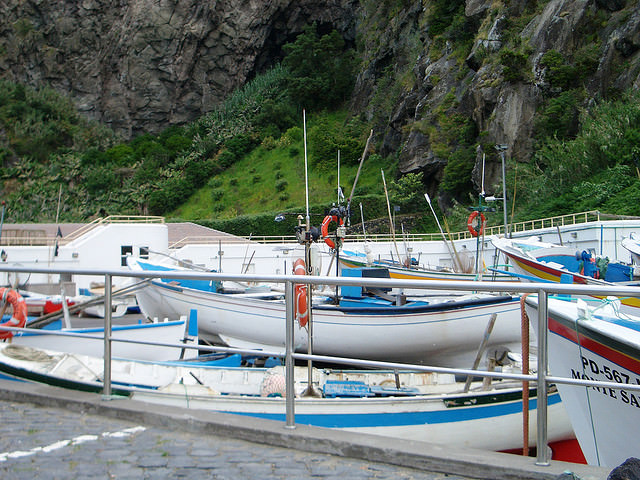 Sao Miguel, the largest island, is also the one with the most diverse scenery and the most to offer visitors. Explore the hot springs and geysers, and be sure to swim in the anti-aging, iron-rich lake at Terra Nostra Park. When dining on Sao Miguel, try some cozido, a meat and vegetable dish cooked deep in the volcanic earth. Sao Miguel is home to several stunning crater lakes, including the mythical Sete Cidades and Lagoa do Fogo. With 50 000 inhabitants, the capital, Ponta Delgada, is hardly a metropolis. Nevertheless, it’s a nice enough little port city with narrow, cobbled streets, interesting architecture, quirky shops and nice cafes. If you’re travelling with young children, be aware of relatively heavy city centre traffic and sidewalks too narrow for strollers. The bright and airy, high-end mall, Parque Atlantico, hosts excellent shops. 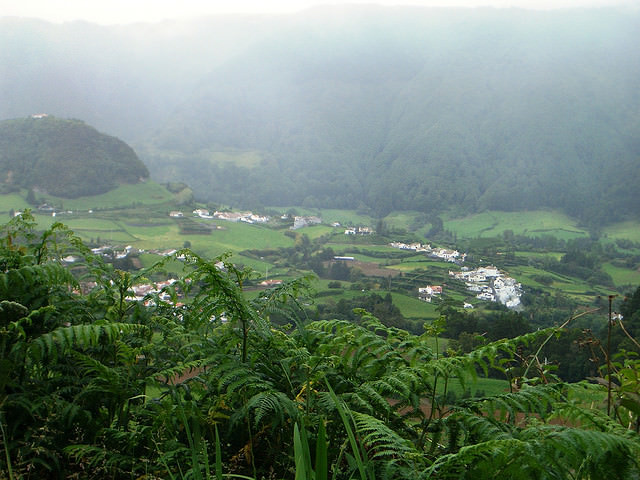 In the central group of islands, Terceira is home to the UNESCO World Heritage listed historic town of Angra do Heroismo,with its spectacular grottos and, Praia da Vitoria, with its pretty beach. On Faial, have a look at the Port of Horta where sailors, through the ages, have left their mark on the graffiti-covered sea wall. The first Sunday in August brings the beginning of Semana do Mar (Ocean Week) in Horta – a week full of water sports which draws tourists from all over the world. Be sure to book accommodations early for this event.

The islands of Graciosa and Sao Jorge boast craters, caverns and hot springs, while Pico is home to the islands’ tallest mountain, the Pico volcano, as well as the archipelago’s second UNESCO World Heritage site, the Pico vineyards.

The western island group consists of two islands: Flores, which offers mountains, valleys, lakes, waterfalls and grottos; and tiny Corvo, home to only 400 people, is famous for handicrafts and windmills.

Where to Stay in the Azores Islands

The Azores islands offer a wide range of lodging choices from hotels, bungalows and manor houses to youth hostels, inns and camping grounds. 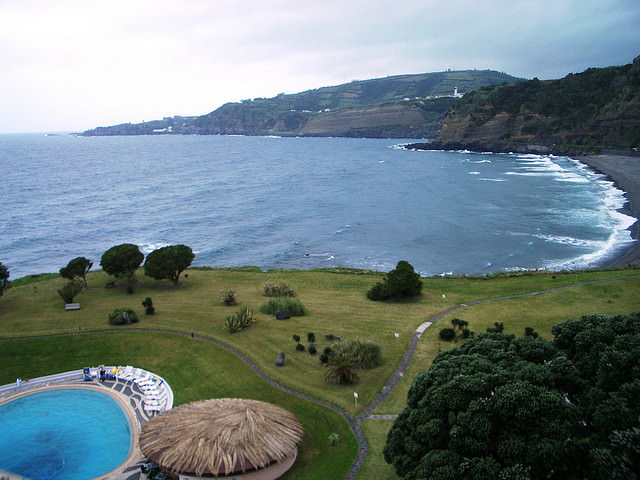 Sao Miguel offers the largest selection of accommodations, most of which can be found in or near the capital Ponta Delgada. You can easily find a double room for under EUR 100. The Sao Miguel Park is a 3-star hotel, as is Terra Nostra Garden in Furnas. Four-star hotels include the Avenida, the Colegio and Marina Atlantico. A bit further out is the pink, superbly situated Hotel Bahia Palace. Other options on Sao Miguel include apart-hotels and youth hostels, inns and camping. If you want to explore Sao Miguel on horseback, you might like to stay at the 17th century manor-with-stables, Quinta da Terca.

On Pico, you can stay in quaint and pretty, rustic houses in Prainha or in the gorgeous 4-star Hotel Aldeia da Fonte at the foot of the volcano.

In Horta, on the island of Faial, Hotel do Canal is on the ocean front. The 3-star B&B Estrela do Atlantico is in the historical centre, and the 2-star Residencial San Francisco, popular with the sailing crowd, is also in the city centre.

Went there when my son was in the Air Force in Terceira (Lajas).One of the most beautiful places I've ever been and would like to go again.Went to Sao Miguel, and I want to go to some of the other islands.What a beautiful hidden jewel.

My Family Is From Sao Miguel Nd i Think I Speak For Most Inhabitants Of The Azores Islands by Sayin The Sites are Def. an amazing adventure but to get the full thrill of the azores islands is being in any of the smaller towns rather than being closer to the city, from the people and interesting architectures to the amazing festivals they have especially during the summer..i hope all who plan on going to these islands have fun and enjoy the islands they are truly an epic trip and you wont be disappointed :)

Going to the Azores at the end of this month. Glad to have found this info.

The Azores look (and sound) absolutely stunning. I had hardly heard about these islands before. Love that misty photo.