Thousands of years before there was a country called England, the people who lived in what is now County Wiltshire constructed a huge henge and several stone circles within it. A henge is a large, generally circular area of land bounded by a deep ditch and a built-up earth bank. Within its boundaries may be stone circles, posts, mounds, and pits.

The henge at Avebury, a village in Wiltshire some 90 miles west of London, is about 420 meters in diameter and is one of the largest Neolithic monuments in Europe.  It is now a National Trust property and a World Heritage Site. It is a fascinating place, and unlike Stonehenge, visitors are free to  walk among and marvel at the stones.

Archeologists have determined that originally there were at least 154 standing stones in three circles. They were 3.6 to 4.1 meters high, some weighing more than 40 tons, dragged or sledded from a quarry nearly 2 miles away. This enormous task began some 5,000 years ago and continued over centuries. Scientists note that there must have been a stable agrarian economy to allow for such time-consuming effort. 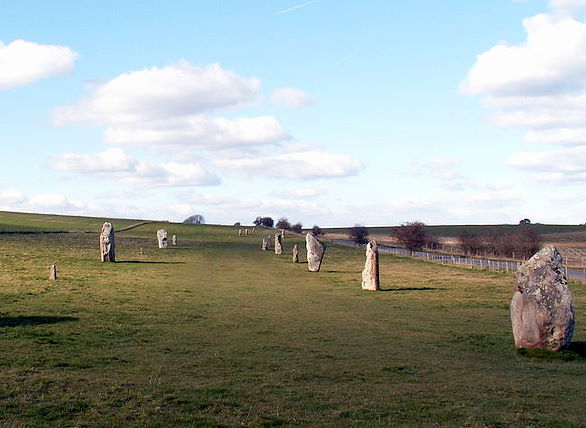 Speculation abounds over the purpose of the henge and stone circles. The site was not a defensive fortification, as the ditch is inside the 9-meter-high earthen bank. The ditch was 11 meters deep, probably dug with deer antlers and stones as tools. The place could have been built for astronomical observation, ancestor worship, funerary rites, rituals, ceremonies, or all these and more. Bones have been found and there are carvings on some stones.

In the early 14th century, Christian authorities ordered the stones destroyed and buried, as efforts to eradicate remainders of pagan practices. The toppled, broken stones were often used in local building construction.
Thirty-six stones stand today, partly because archeologist Alexander Keiller had the fallen ones re-erected in the 1930s. More still lie buried in the ground.  Avebury has become a spiritual center again, with Pagan, Wiccan, and Druid festivals attracting crowds, especially for the summer solstice.  Avebury is said to lie on the St.Michael ley line, an Earth alignment that crosses England and has spiritual significance. 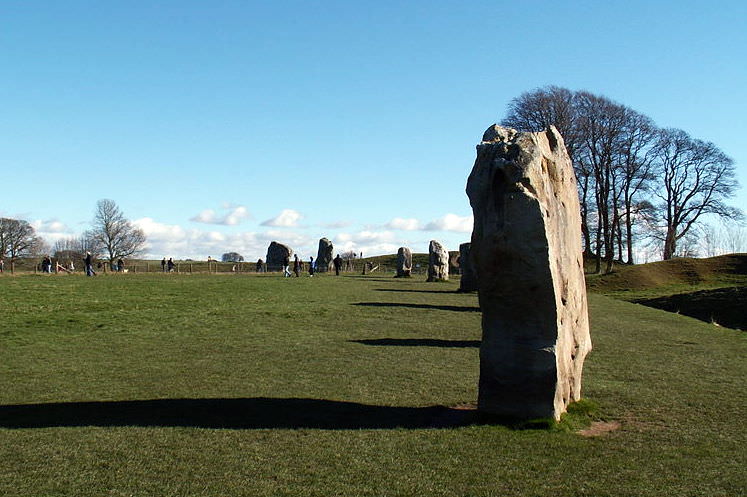 Avebury holds more than ancient mysteries.  At the Alexander Keiller Museum you can learn the history of the archeological work done at the henge and its stone circles. In the village are lodgings, eateries, a gift shop, a manor house, and a 400-year-old pub that’s said to be haunted. The thatch-roofed Red Lion serves classic pub fare, low on the cuisine scale but atmospheric. The Circle Restaurant is a good choice for a hearty English meal or soup, and a nice stop for a cup of tea.

Next to the Red Lion is The Lodge Avebury, a comfortable, inviting bed-and-breakfast with vegetarian food.  Another place to stay, the New Inn Bed and Breakfast, is about a mile away from the stone circles.
In the nearby town of Marlborough, the Waggon & Horses is one of the buildings made from the Avebury Ring’s crushed stones, back in the 16th century.  It’s been serving meals and ale to travelers ever since. It has the traditional thatched roof and dormer windows, beamed ceilings and an open fireplace.  There’s also an apartment for rent that accommodates four.

There is regular bus service to Avebury in Wiltshire; the nearest train station is 10 miles away at Swindon. It’s a one-hour drive to the village from Heathrow Airport.

A Magical Day at Stonehenge | EuropeUpClose.com

[...] Of course, dispelling these myths about the stones, archaeologists believe Stonehenge was built  between 3000 and 2000 BC. The surrounding circular earth bank and ditch date slightly earlier than this. Some archaeological evidence found that it could have been a burial ground, as cremated remains have been found there from as early as 3000 BC. It is certain that Stonehenge was a place of religious significance and pilgrimage and revered by the Druids. Since 1986 the site has been legally protected and added to UNESCO’s World Heritage Sites along with nearby Avebury Henge. [...]

A Rainy Day on the Salisbury Plain | EuropeUpClose.com

[...] so hard it kept blowing my umbrella inside-out, but even in the stormy weather, the ancient Stone Circles of Avebury  was an amazing sight. Perhaps the misty aura around the site made it even more mystical. I had [...]

Susan, thanks for the reminder. I agree, it's useful to have measurements in both miles and kilometers (and other equivalents). Frankly, I think it would be easier in the long run if we left miles behind and went for the metric system--but people have been saying that for years and it hasn't happened yet. In the 14th century, an inch was defined as 3 grains of dry barley, side by side, a rather inexact measurement today.

I enjoyedyour article, however reading information in meters, miles and tons is very irritating!

If you want, put both inches and meters and miles and kilometers and tons and whatever, but please don' t mix the two systems!

I believe that if you are writing for Americans and thinking about the age of the people who will read this article (meaning probably older folks), you need to talk in inches, feet, miles and tons.

Actually, I would welcome the info in both systems. That way I could understand the metric system to a fuller extent. When I only get metric info it doesn't mean much to me, and I feel like I'm missing a lot.

Thanks for the tip, Michael. I will definitely take a look at this documentary. We can't know all the answers to those mysterious monuments, but we can speculate and ponder the far-off past.