One of the reasons I travel is to discover and learn. When I first visited Europe, I didn’t know what a rampart was. But as I travelled from one old French town to another I saw how towns, questing for invincibility, had fortified themselves with surrounding walls. They were standard issue in Europe of yore. As barbarous behavior diminished and towns grew, they eventually burst those walls leaving us with ancient vestiges and fun vocabulary such as machiolation and portcullis. 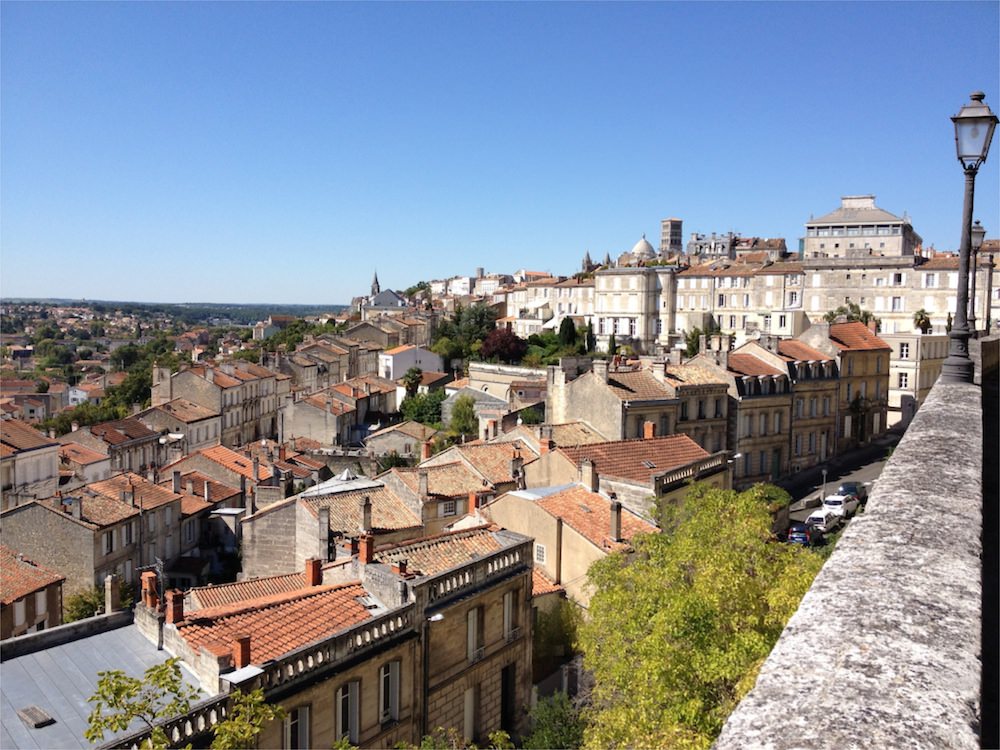 And fun is what Angoulême is all about today—off the ramparts and into a world of fancy and fabulation. This small, stylish city in the heart of the Charente region of southwest France hosts a francophone film festival (Festival du Film Francophone d’Angoulême) in late August that features films from French-speaking lands by emerging young filmmakers thus providing many with an essential springboard toward an audience and a distribution network. 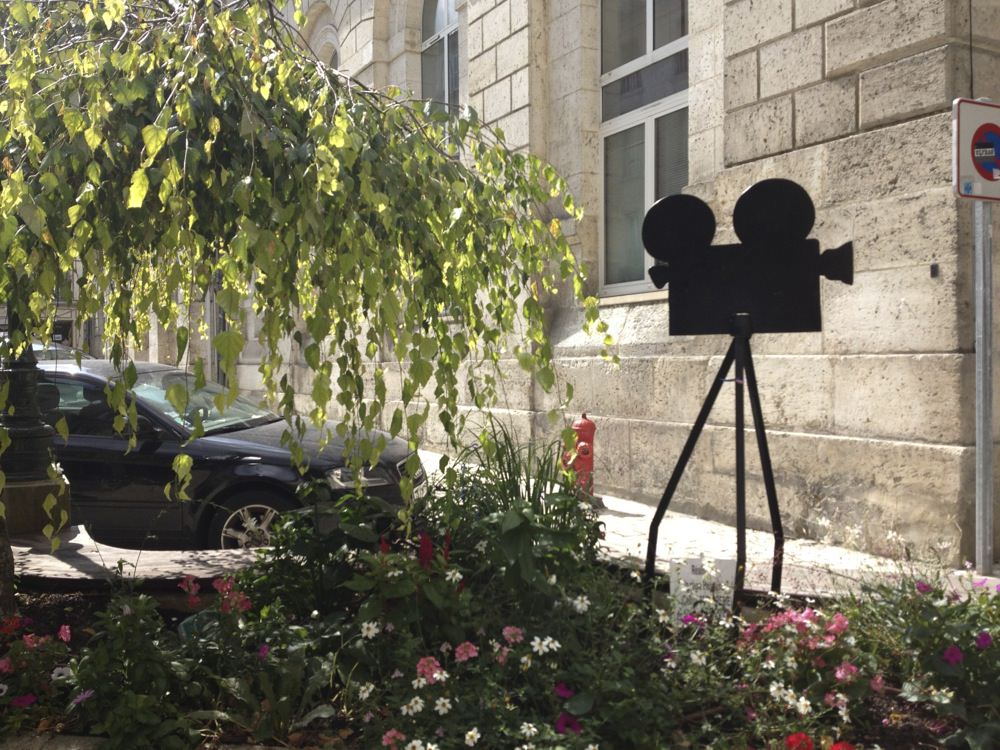 Angoulême is also home to the annual international festival of cartoons, comics and graphic novels (Festival International de la Bande Dessinée), a celebration that draws artists and devotees from around the world. Known in France as “BD,” this form is beloved by generations of Asterix-addled youth. 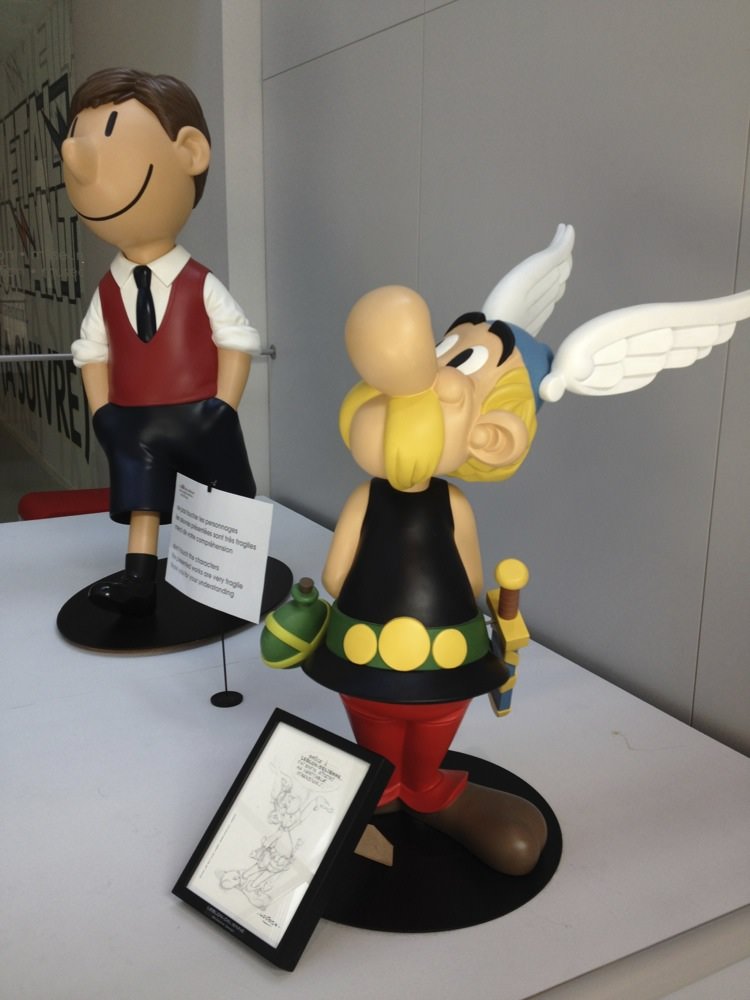 The hyper-chic already know that the graphic novel has come into its own. The genre now even has a name: illustrated literature. As a sign of the times, a school linked with Angoulême is teaching this form and offering a BD degree. Held every January since 1974, Angoulême’s festival claims to be the second largest in the world and occupies 35 different event venues across the city when in full swing. Next year’s festival dates are January 29-February 1, 2015 and feature Bill Watterson of Calvin and Hobbes fame; Japanese manga writer/artist Taniguchi; Jack Kirby, creator of Captain America, Hulk, the X-Men, and much more. 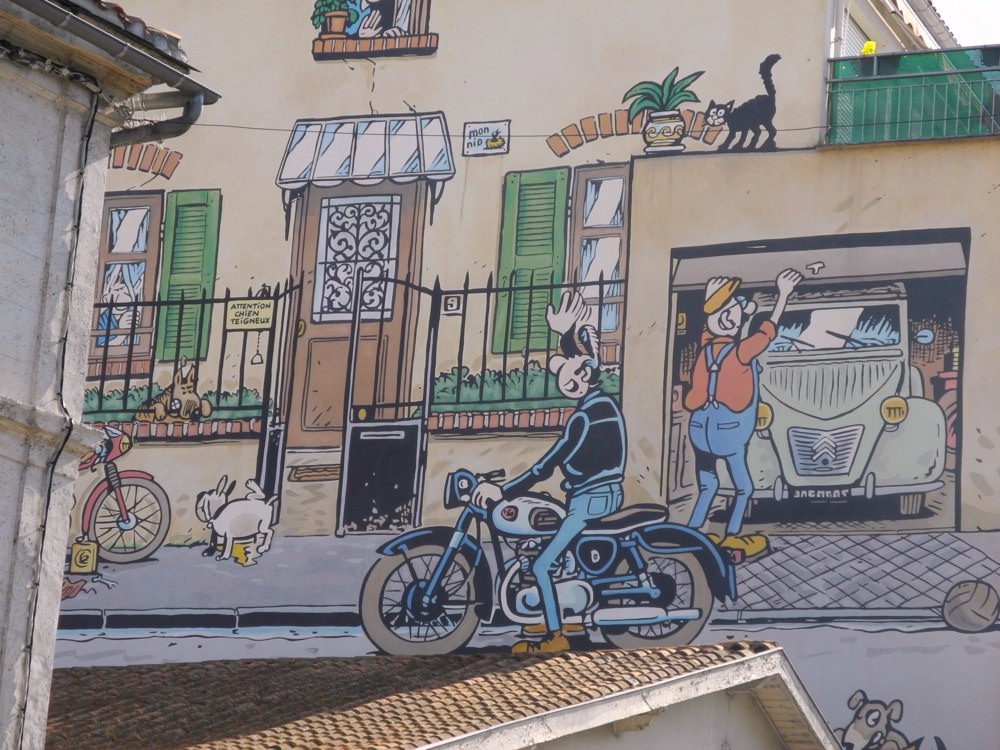 In 2012, Reportage by Joe Sacco, from Portland, Oregon, was an official selection. Incidentally, his work can be seen currently in another dramatic setting, the minutes-long people-mover in a Montparnasse metro passage in Paris where his graphic illustration of the Battle of the Somme from World War I has pride of place some twenty feet high and running several hundred feet long. 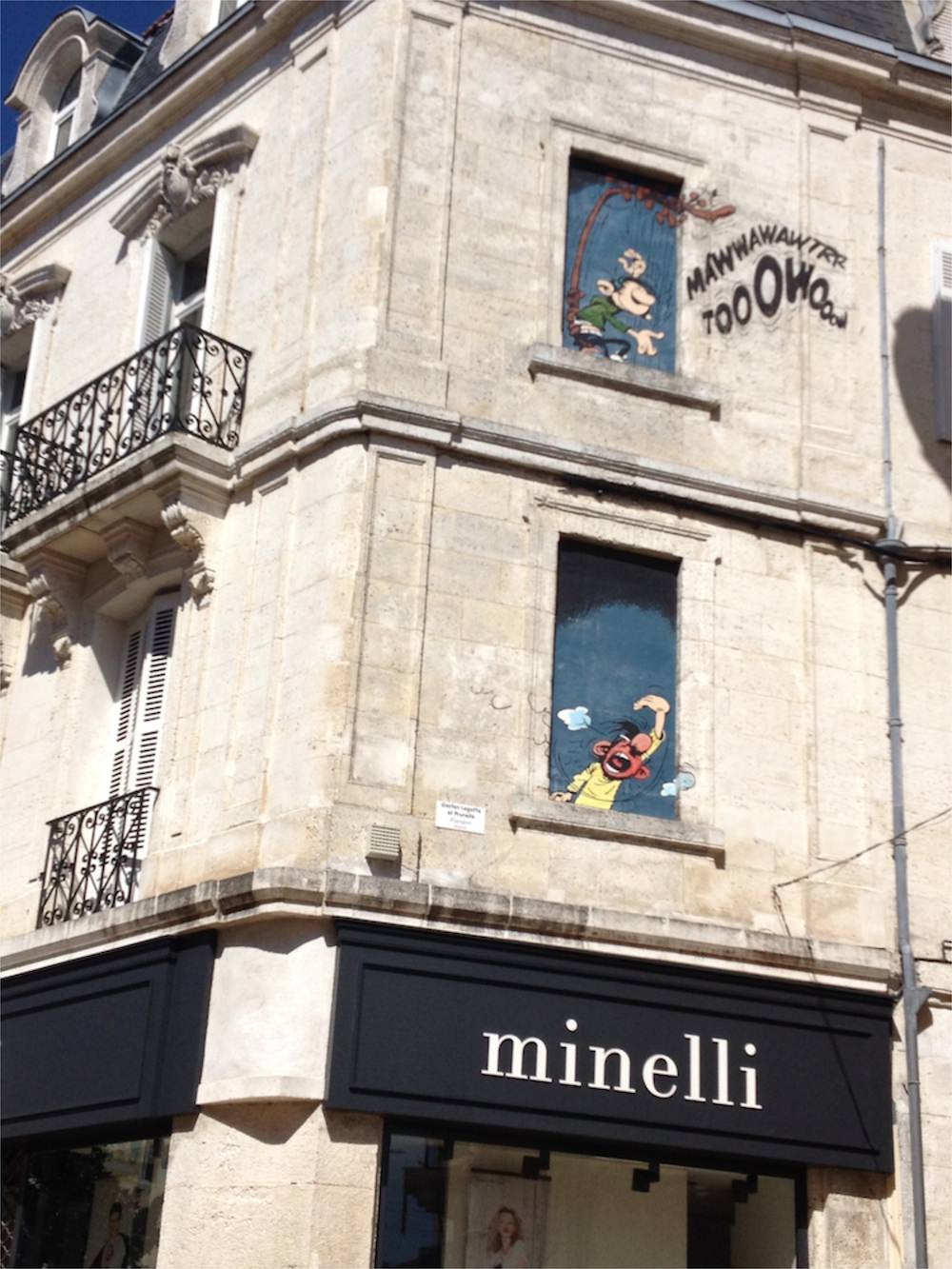 Angoulême has an ever-growing number of droll murals of famous comics characters reminding visitors that this town is comics HQ. On buildings, down alleys, in the streets and main squares, on public mailboxes, the interior walls of a fast-food restaurant, even at the doggy-droppings bag dispensers near the entrance to parks—the tribute to the bande dessinée riots on. 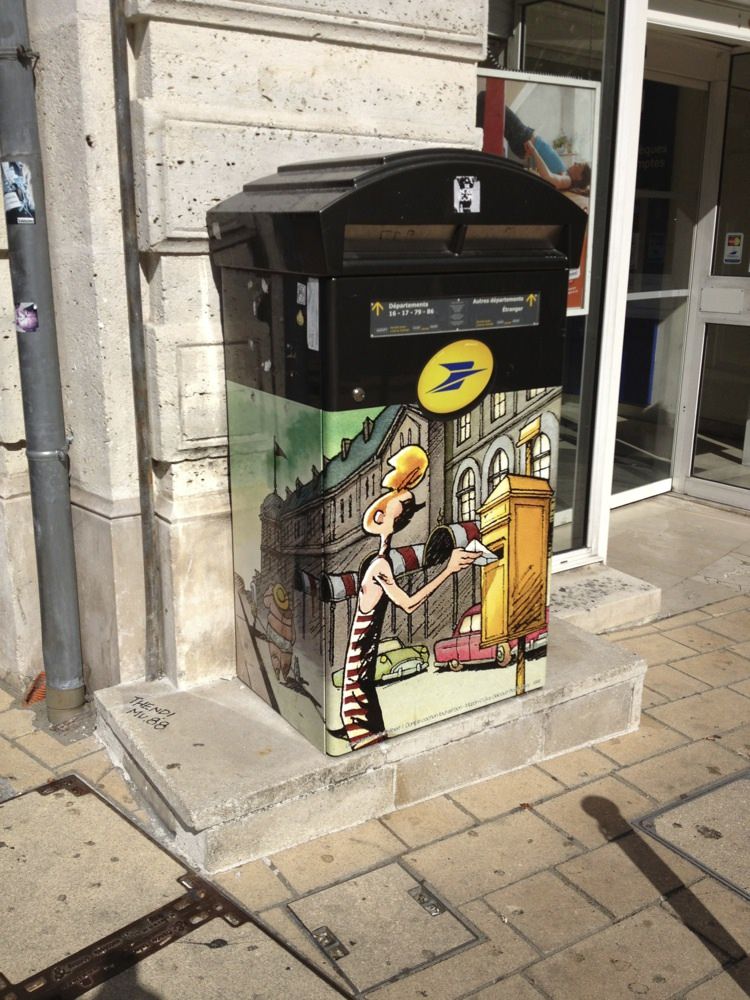 Reflecting the changing times, streets named for Goscinny, creator of Astérix, and Hergé, inventor of Tintin, intermingle with the more sedate Corneille and Molière. Over a thousand street signs now appear as speech bubbles. 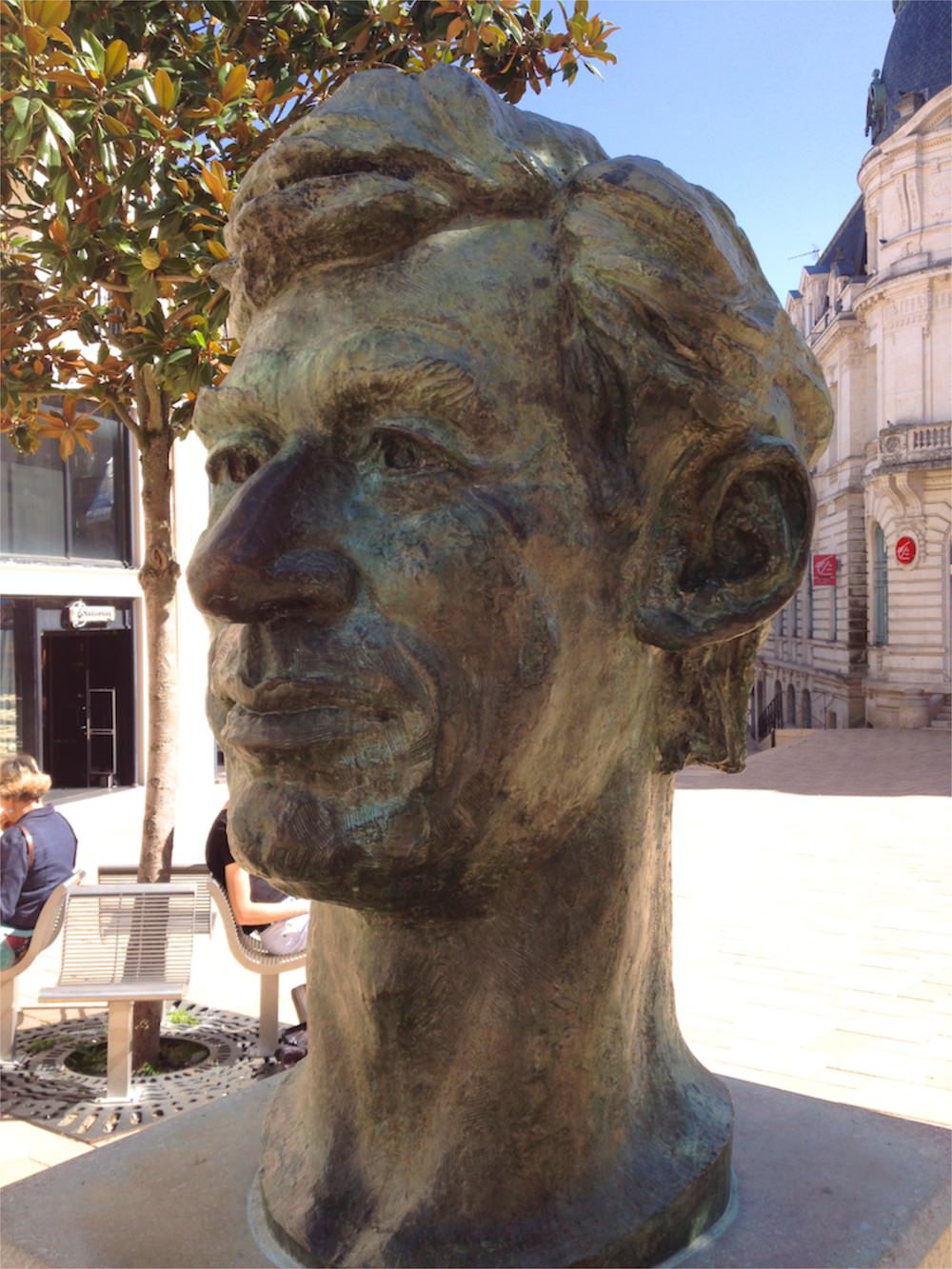 A museum is devoted to the BD in Angoulême along the Quai de la Charente, la Musée de la Bande Dessinée. Comics not being my thing, I thought I’d be overcome by torpor after a half-hour of “Biff!” and “Pow!” But an entire afternoon slipped away as I learned about the rock stars of the fantastic, saw their work, learned how the industry has evolved and studied the photo portraits and biographies of the artists through the decades as this form has developed. René Goscinny looks exactly like someone capable of creating Astérix and Obelix and a whole lot more mischief if only he hadn’t died so young.

The parent organization (La Cité Internationale de la Bande Dessinée et de l’Image) that administers the sleek museum, is publicly funded possibly as a nod to the growing tourism potential of this industry for Angoulême. It includes the museum, bookstore, library, brasserie and art film cinema. 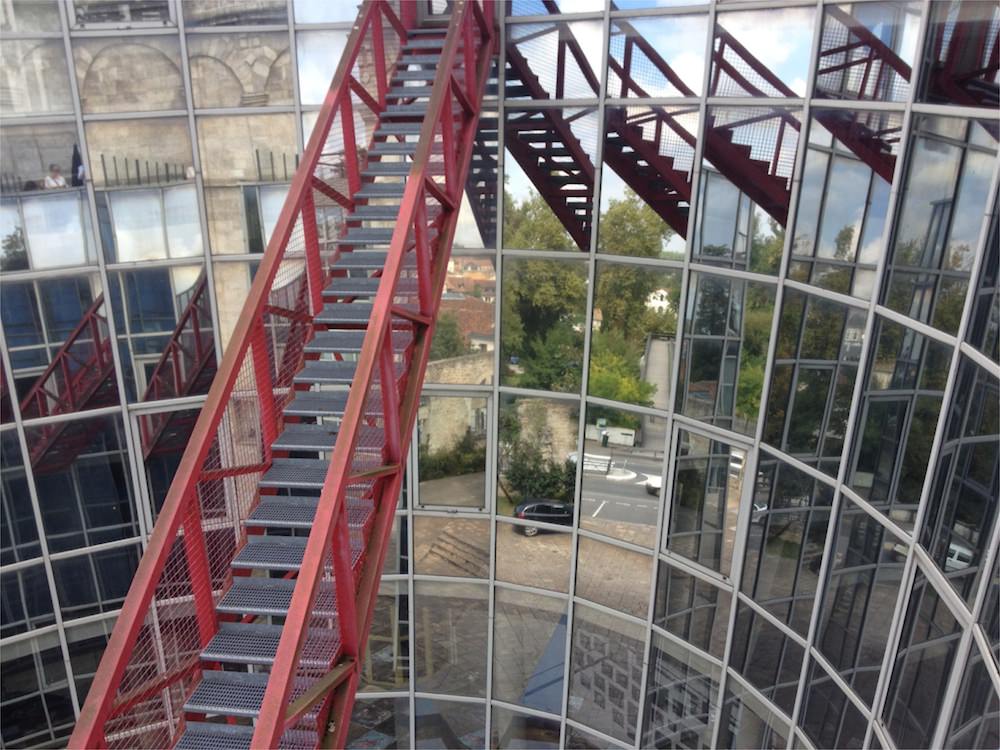 These elements are linked by a passarelle (foot bridge) featuring a larger-than-life sculpture of sailor-adventurer Corto Maltese, a character created by Hugo Pratt. Corto enjoys cult status in Europe. 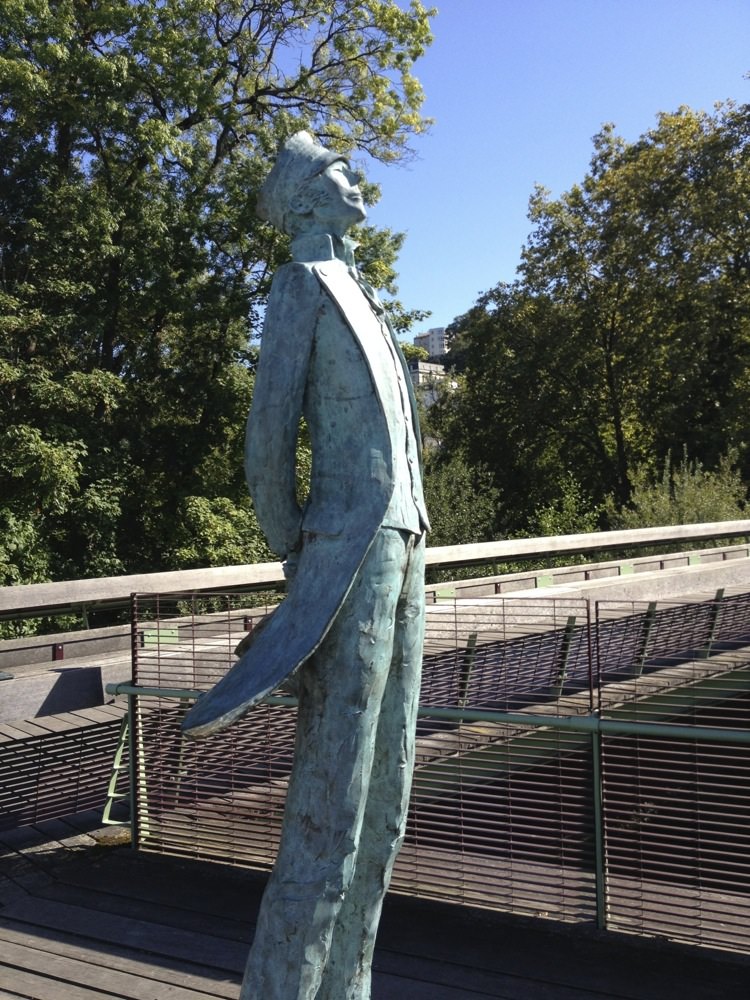 On show at La Cité this year are the works of emerging artists-in-residence from around the world—Belgium, Brazil, China, Lebanon, South Korea, Spain, UK, US and more. Women have entered the field in force. Jessica Abel has work included in the exhibition. She collaborated with Ira Glass of This American Life on a how-to comic book entitled Radio: An Illustrated Guide. A second part of her album is in the works entitled On the Wire.

Sortir, a monthly guide to what’s on in the area, is organized by date and type of event. It’s a very useful tool for extracting the maximum amount of fun out of your stay no matter what time of year nor how long your stay. Or, if you crave an unstructured stay, there is plenty of entertainment value in strolling along the town’s central pedestrian zone and window-shopping—window licking, in French—or engaging in a little strategic grazing.

Check out les charentaises, on display in shop windows. These traditional slippers, with felted wool soles, claim to be valued by valets for their utter silence. In fashion again, or relookée, they come in many styles and pack well in a homeward bound suitcase, for your valet or yourself. 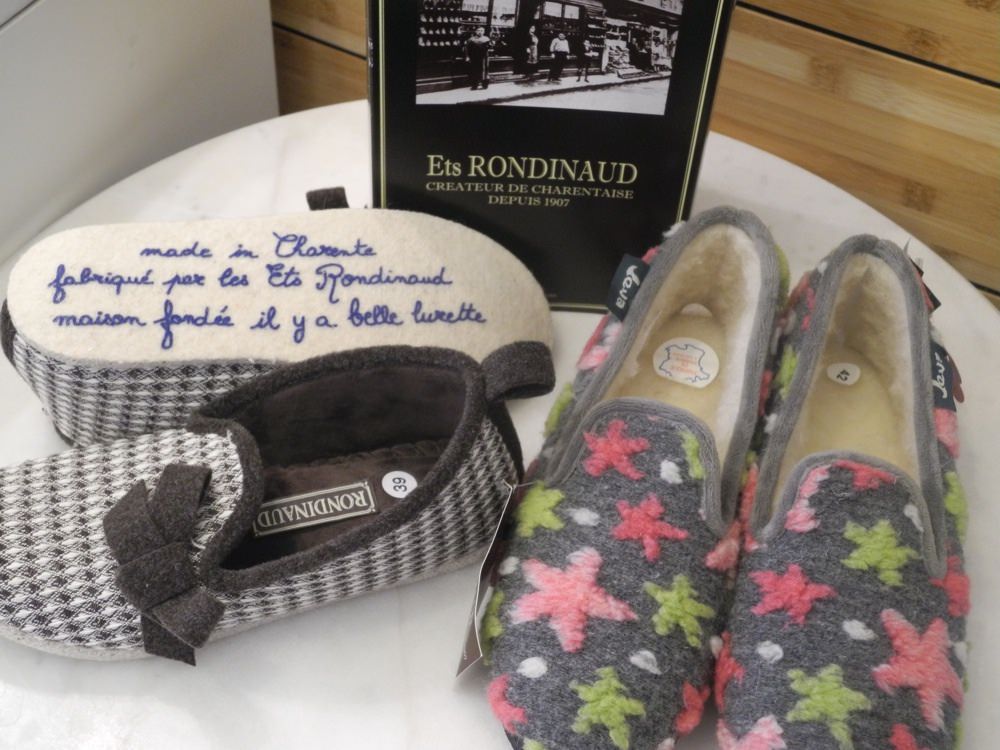 There are two marvelous markets for produce and regional food products: the 19th c. wrought-iron and glass masterpiece of Les Halles which sits like a queen in the center of the old city surrounded by adoring bistrots, and the open-air market at the Victor Hugo Square on the eastern plateau. Both are great entertainment value if you’re a people watcher. And when you make a purchase, the vendor will likely ask you if you’d like a poche. That’s the regional term for a bag. 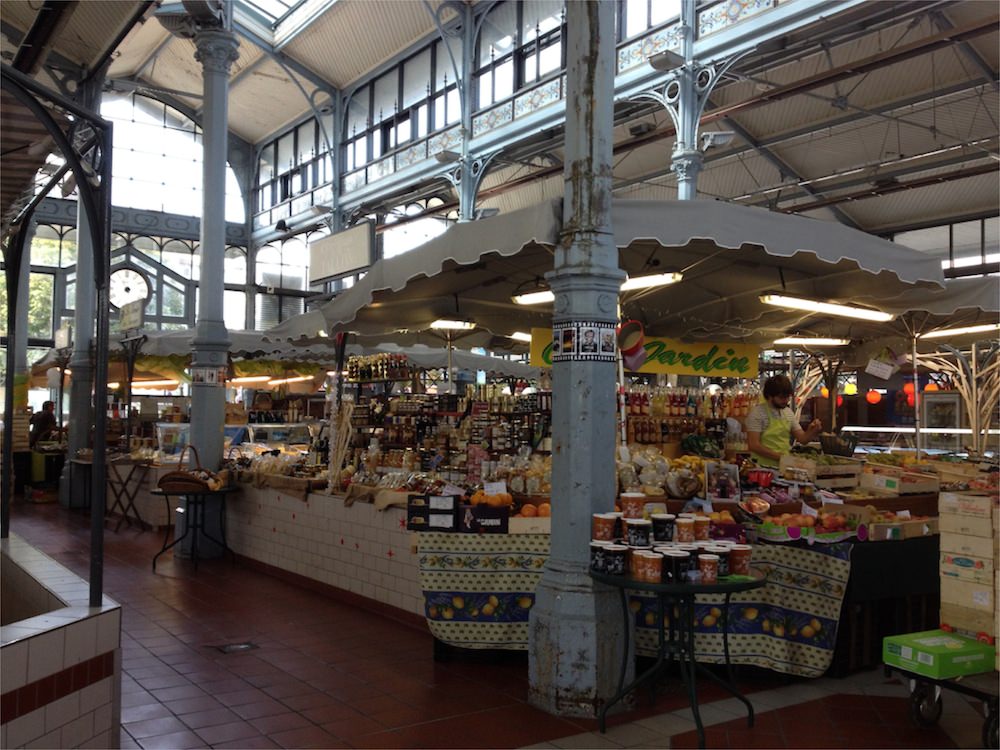 Not far from Les Halles is the Biscuiterie Lolmède, 3 rue des Arceaux, which bakes traditional macaroons that differ from the colorful and perfectly-round spheres found in every other corner of the land. Made with real almonds, egg whites and sugar, their chewy deliciousness is a perfect mid-morning pick-me-up. 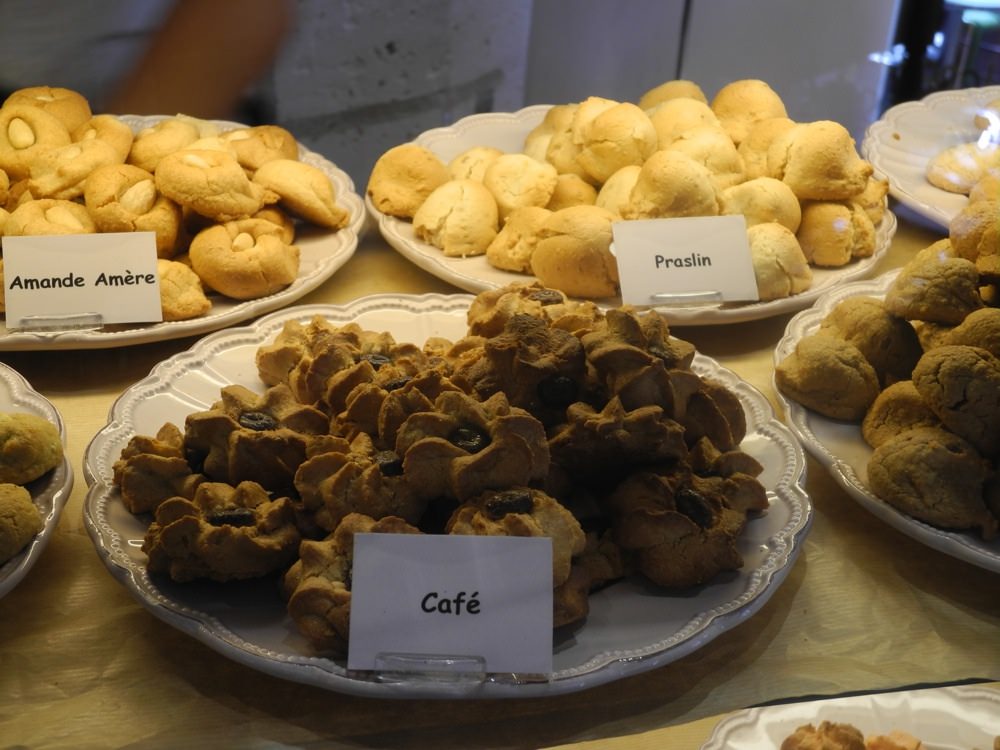 Another delightful discovery of the Charente region is pineau, a fortified wine that is a blend of grape must and cognac. Often enjoyed as an aperitif and served chilled, its fresh sweetness goes well with fruit and savory spreads. Lillet is another regional aperitif made from Bordeaux wine varietals and handcrafted fruit liqueurs made in Podensac, a village near Sauternes in the Graves region. 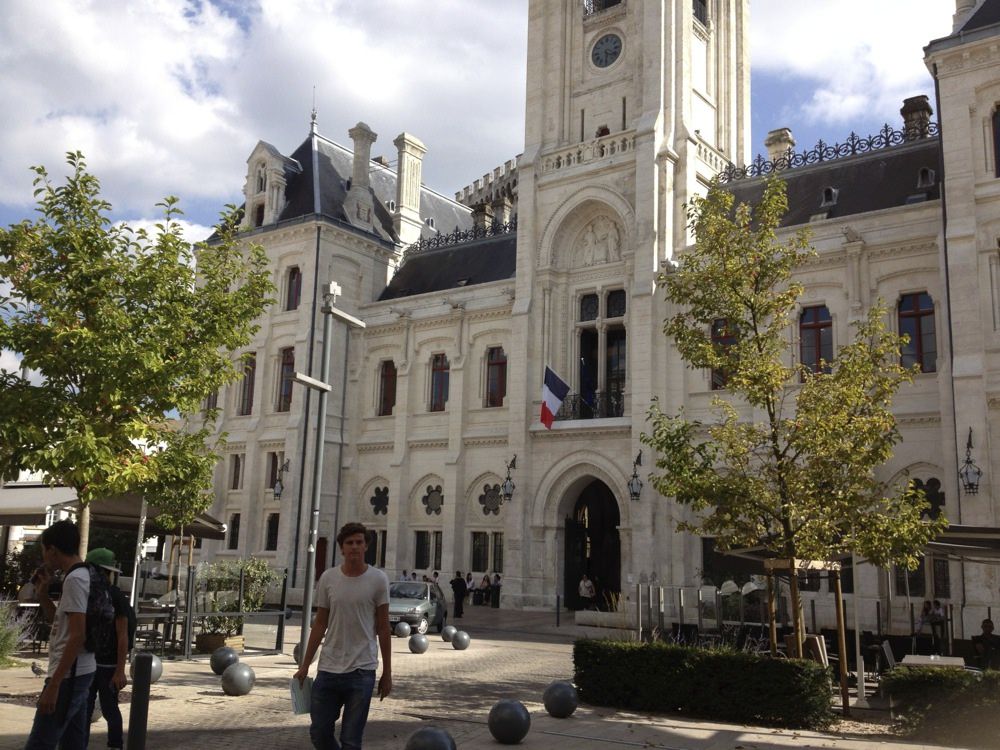 Angoulême is a split-level city and an excellent example of a fortified city; the oldest part is located on a high plateau. Early ramparts were constructed in the 3rd or 4th century and ran around the entire rocky spur, some 2,280 meters. The city is still partially surrounded by the 13th century ramparts most of which are still walkable. The newer growth spills out around the lower area where the Charente River bends dramatically at the base of the plateau and flows west into the Atlantic about 75 miles to the west. 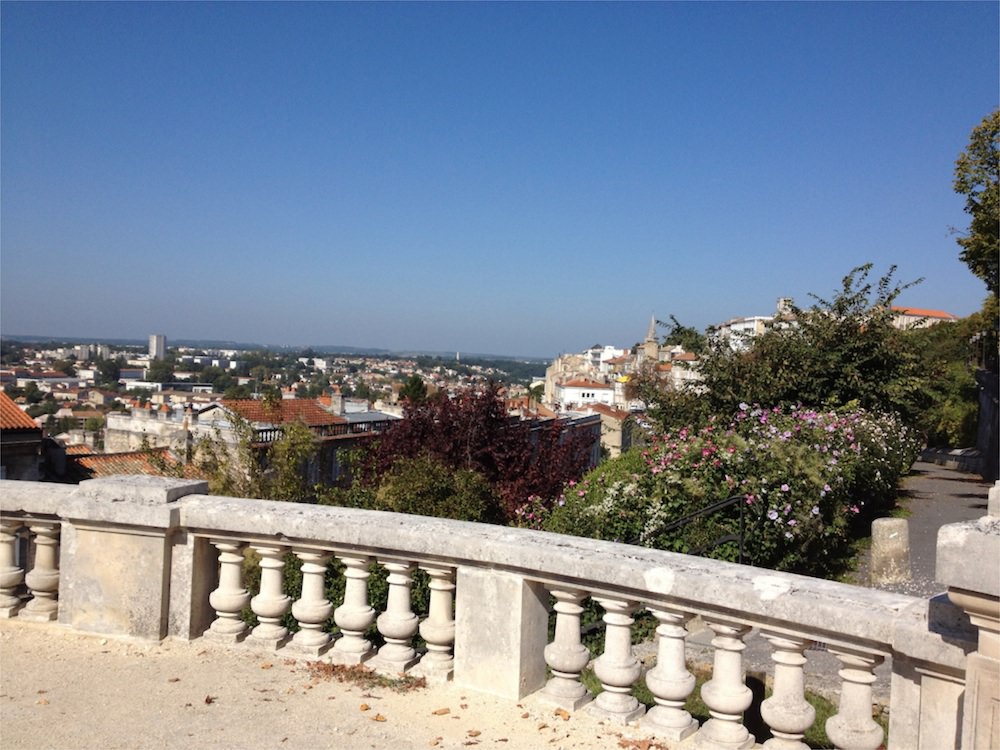 The ramparts provide the venue for another fun element of the city’s life, the annual Circuit des Remparts, held the third week of September. In its 75th year, it features classic cars hurtling through the old streets and around the ramparts on a course that hasn’t changed since its inception. 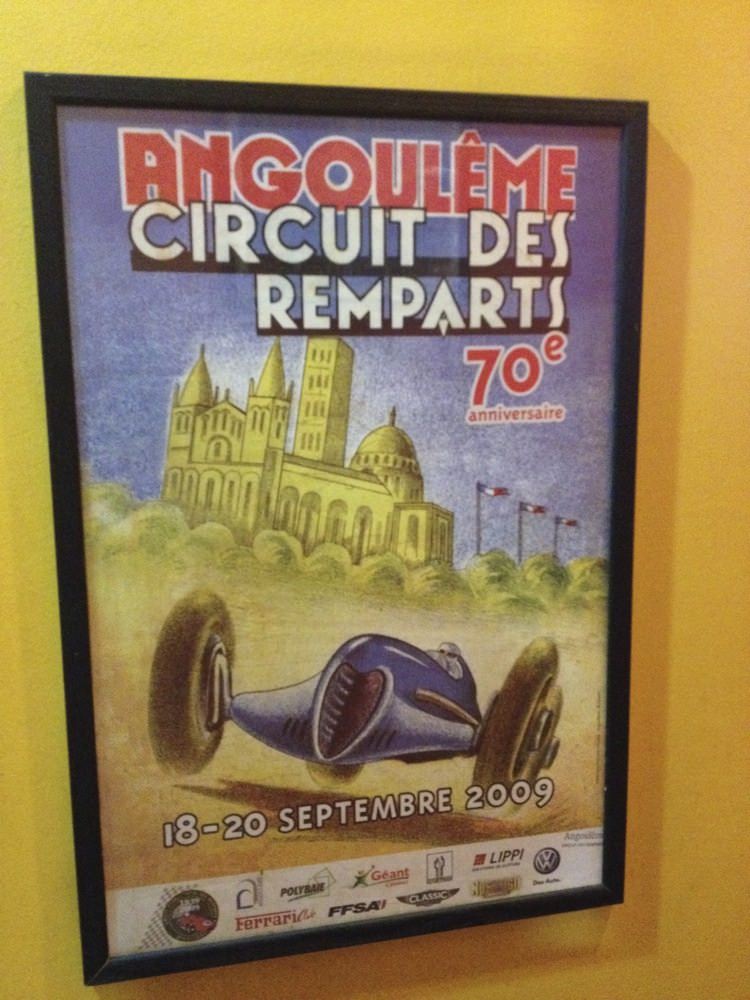 During the Concours d’Elegance, classic cars are placed around town where people can see them and talk to the owners. The Charente International Rally, another element of the Circuit, is a leisurely showcase for 300 cars to drive through the surrounding countryside stopping for a classic French lunch along the way.

Angoulême has a long tradition with flights of fancy. In 1806, 72-year-old General Guillaume Resnier de Goué tossed himself off the ramparts to flight-test a pair of wings he’d designed, winning him a broken leg and the distinction of being the world’s first hang-glider.

If neither race cars nor wings are your chosen form of transport, there are oodles of bicycle circuits in the surrounding countryside and maps, guides and signage along the routes. The tourist office at 7bis, rue du Chat in Angoulême can provide detailed information. There are many other destinations within easy striking distance of Angoulême (look soon for “Angoulême: Springboard to Southwest France” on this same website).

Maggie Herrington is based in Portland, Oregon and writes for newspapers, journals and online websites.

I enjoyed your interesting points of view, from my old town...

Thank you very much for this lovely contribution about my city and around. I hope you spent a good time and you visit us again. Dimitri from Angoulême, the "balcony of the southwestern France".

[…] plenty to see and do in Angoulême (see “Angoulême’s Fabulous Flights of Fancy” on this same website). Lodging and food tend to be somewhat less expensive and the town is […]

Maggie, a group of friends and I hiked along the Charente River in the Cognac region of France in 2013. We started and ended our adventure in Angouleme. I loved that city! Your pictures are beautiful and reminded me of what a wonderful trip we had there. I've blogged about it and written an article that is in Travel Post Monthly, hopefully to be picked up there by a travel publications outlet.