The tiny islands of Malta, in the Mediterranean Sea 60 miles south of Italy, hold ancient secrets. The ancient temples of Malta were built 6,000 years ago, before Stonehenge, before the pyramids of Egypt, and are the oldest stone monuments in the world. Who were the prehistoric people who, without metal tools or the wheel, cut slabs of rock, stood 20-ton megaliths on end, stacked them in circular walls 40 feet high, and carved their inner chambers? A friend and I went to Malta to find answers.

Getting to the Temples of Malta 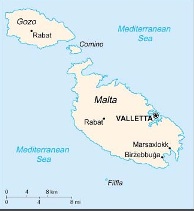 Getting to Malta from the U.S. involves more flying time than we wanted, so we broke up the trip with a few days in London. Even better would be adding Malta to a trip to Italy, and flying there from Rome on Air Malta. It’s a 1-1/2 hour flight, with the current round-trip costing about $136 plus taxes.

A long line of visitors preceded our trip. The Phoenicians landed in 800 B.C.E. and were followed by a string of conquerors who wanted control of the strategic islands. Malta is the largest and the commercial center. Gozo is more rural, and Comino is largely uninhabited. It’s easy to get around by the cheap and efficient bus system; or rent a car to get to out-of-the-way places. Road signs are in English, though they’re not always clear to a newcomer, and driving is on the left. There are lots of well-qualified guides and tour companies, too. English is spoken everywhere, as are Maltese and Italian. 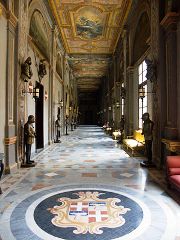 We came not only for the temples but to see Malta’s other treasures, like the capital city of Valletta, with its ornate churches and palaces. They were mostly built by the Knights of John, later called the Knights of Malta, who ruled the country from 1530 to 1789. In the Grandmaster’s Palace we gawked at 18th-century Gobelin tapestries, which are stunning works of art. In the armory, we tried to imagine clanking around in 50 pounds of armor, carrying a sword.

We visited the National Museum of Fine Arts to admire the art collection and the marvelously baroque 16th-century St. John’s Co-Cathedral to see a Caravaggio masterpiece, “Beheading of St. John.” Next time I would linger more in the cathedral, as it is spectacular. (Note: Wear flats; high heels aren’t allowed in the cathedral.)

In the Museum of Archeology, we followed the discoveries of centuries of civilizations, going back to Neolithic times.

We strolled around Mdina, a rather eerie, silent, medieval city with no traffic and nothing modern to break the spell. I’m told it is most romantic at night, when you’re walking the lamp-lit streets. At any time it’s an intriguing step back in history.

Malta has many more riches, but the huge, mysterious remains of the temples beckoned. That’s Part II of this story, along with some details on hotels and restaurants.