After strolling along the Spree River, standing in awe at the base of the Berliner Dom (Berlin’s celebrated cathedral) and bargaining for a large fur hat (a throwback from communist East Germany) from a local street 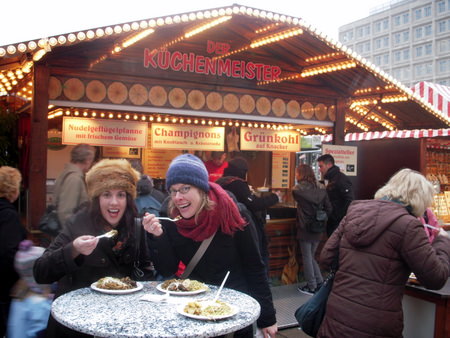 vendor, I found myself in need of a good lunchtime wurst (sausage). My friend suggested we wander over to the nearby Alexanderplatz, a large public square and transport hub in the Mitte (city centre) district (formerly part of East Berlin).

Berliners often call it “Alex,” referring to a larger neighborhood stretching from Mollstraße in the northeast to Spandauer Straße and City Hall in the southwest. Berlin’s city hall is frequently called Red City Hall (referring to its color, not politics). It is a renaissance-styled red brick building built in the mid-18th 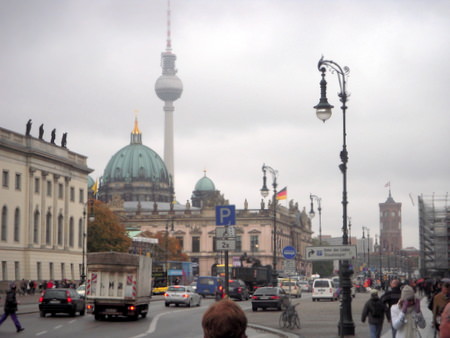 century that was heavily damaged during the World War II and subsequently reconstructed (in the 1950s) according to the original architectural plans.

Most of the original buildings right on the Alexanderplatz were bombed during World War II. As the center of East Berlin, the square was used as a showcase of communist architecture. Many of these plain, hulking buildings still stand in the platz today. However, there are also several monuments that make Alexanderplatz stand out from the rest of East Berlin. 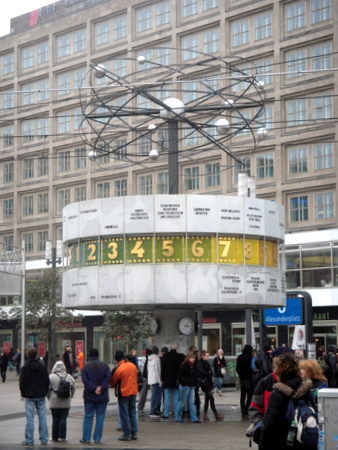 My sister and I were both enamored with the Weltzeituhr, a mod “world time clock.” It was constructed in 1969 as part of the square’s redevelopment phase. The Weltzeituhr features a revolving cylinder with the world’s 24 time zones, marked with the names of major cities in each zone. The clock is crowned by a simplified model of the solar system that revolves once per minute.

Alexanderplatz is also home to the famous Fernsehturm (TV Tower) or the Tele-spargel (toothpick) as it is commonly called by Berliners. Measuring 1197 feet, it is one of the largest structures in Europe. The Fernsehturm was built in 1969 by a team of German architects in collaboration with Swedish experts. It is comprised of a concrete shaft, a steel-clad metal sphere and a TV antenna. Views from the top are amazing. Be prepared, the line to go up is very long. If you have reservations at the revolving restaurant (Telecafé), you can bypass the line and go right up. Dinner reservations should be made well in advance. 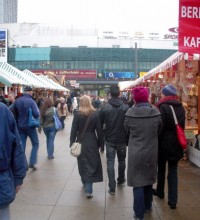 exhibition is in English and German and can be visited until November 14, 2009. It is open 24 hours a day and admission is free.

If you’re interested in shopping for arts and handicrafts (paintings, wood carvings, jewelry, lanterns, bags, books, etc.), visit the nearby kunstmarkt (art market) at the Museumsinsel (Museum Island) next to the bridge every Saturday (11:00 AM – 3:00 PM) and Sunday (10:00 AM – 2:00 PM). Be sure to try the currywurst (sausage with ketchup and curry powder- yes, it’s delicious!) and gluhwein (spiced wine with a shot of rum).

I had this wurst (sausage) in Berlin and I really liked it.