Albi, on the River Tarn in southwestern France, is famous for its well-preserved medieval and Renaissance buildings. Half-timbered houses and former mansions line the winding, cobble-stoned streets of Old Albi, reminders of the town’s rich heyday when merchants grew wealthy selling dyes and textiles. Albi is easy to explore on foot, and the Albi tourist office, on Place Sainte-Cécile, provides maps for three walks (labeled Purple, Gold and Blue). 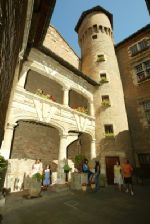 One intriguing building is the brick Hotel de Reynès, which has a courtyard with two galleries, a 14th-century corner tower, and windows decorated with mermaids. Another dye merchant’s mansion is Hôtel Sére de Rivières. Maison du vieil Alby is a well-restored medieval house of brick and wood.

Visitors to Albi also come to be impressed by the incredibly ornate interior of the Cathedral of Saint Cecilia and by the large collection of Henri de Toulouse-Lautrec’s artworks. Many of the artist’s most noted paintings, posters, drawings and lithographs are displayed in Palais de la Berbie (Bishop’s Palace). Toulouse-Lautrec was born in Albi in 1864. The imposing palace, built in the 13th century, became a museum in 1905 and holds other artists’ work, as well as a gallery of archeology. There’s a beautiful formal garden next to Palais de la Berbie, which stands between the cathedral and Pont Vieux, the Old Bridge, one of the oldest bridges in France.

Not to be missed if you’re interested in navigation is the Lapérouse Museum. Here, vaulted rooms take you through the expeditions of Admiral Jean Francois de Galaup Lapérouse, who was born near Albi in 1741. There are ships’ models, old navigation instruments, maps, and charts that show what sailing was like in the 18th century. 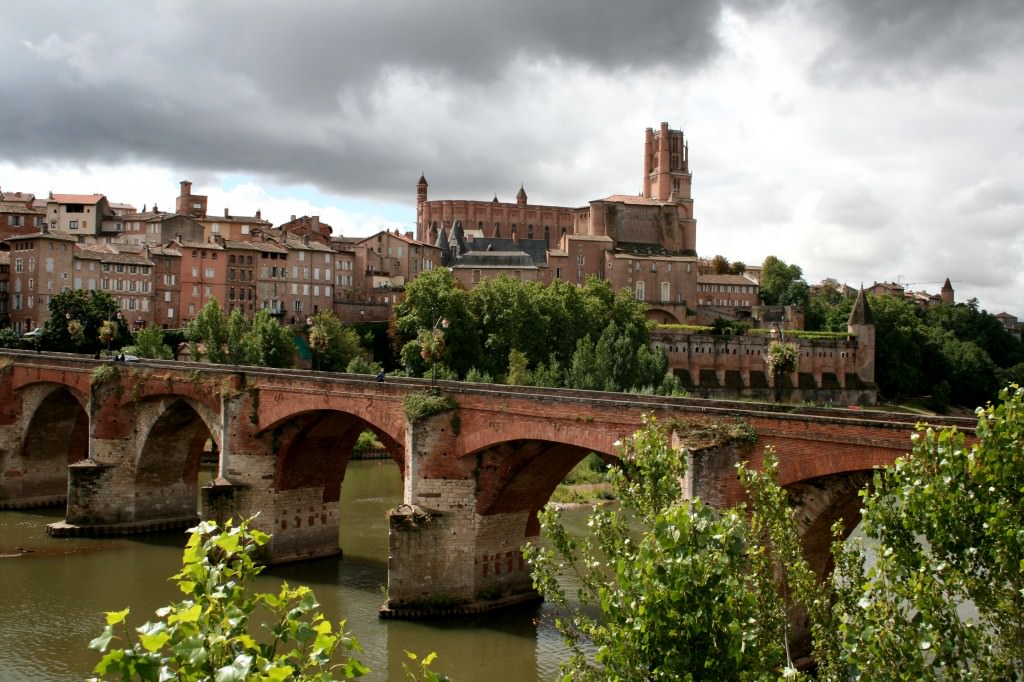 Albi is more than its past. Both the modern and historic sections are lively. Place du Vigan is the social center, an appealing place to stop for a coffee or meal at a terrace café such as Le Pontie or Le Grand Café de La Poste.  In this fertile valley, grains, vegetables, and orchards grow in profusion, and produce markets are open several days a week. On Saturdays, a flea and antiques market is held for browsers in search of treasures. People flock in for festivals, too: Carnival in March, Jazz Albi in May, theater in June and July. At the end of July there’s a music festival, in September a motor rally, and a book fair in October. The year ends with a film and art festival and Christmas concerts. 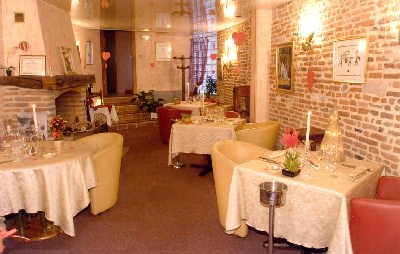 One of Albi’s best restaurants is Le Jardin des Quatre Saisons. It has a romantic atmosphere, with excellent cuisine served indoors or on the garden terrace. It’s noted for shrimp ravioli and superb fish dishes. Don’t miss the fine chocolates at L’Artisan Chocolatier, and try a local specialty, aniseed pastries.

A good hotel on a quiet street is Hostellerie du Grand Saint-Antoine. The old building in the center of town, renovated in 1998, has 44 guest rooms and a large garden. Hotel les Pasteliers is a popular lower-cost choice, known for its friendly service, on the edge of the historic old town. It’s an easy 10-minute walk from the cathedral. Something different in lodgings is Lautrec, an apartment in a 16th century house once owned by the Toulouse Lautrec family. It has a balcony and garden and is a short walk to shops, restaurants, and the Toulouse-Lautrec Museum.

The Old Bridge photo is outstanding. I love the way the grey sky contrasts with the red bricks everywhere. Thank you for this article!