Leuven, a lesser-known city in Belgium, is located a short train or car ride to the northeast of Brussels. However, it’s not that Leuven attracts fewer visitors than other Belgian cities such as Bruges, Antwerp and Ghent because it doesn’t have anything to offer— it is rather the contrary! The city of Leuven is a vibrant centuries-old university city.

Leuven is home to the Catholic University of Leuven, an institution that was founded in 1425 and is the largest university in Belgium and one of the oldest and most renowned in Europe. It is a prestigious university that draws in bright minds from all over the world and has one of the most advanced research centers in the world. During the academic year, the majority of Leuven’s 100,000-strong population are students. Leuven is a city where centuries-old buildings and ultra-modern cutting-edge science go hand in hand. This large student population creates a vibrant and always-lively atmosphere in the historic city center. 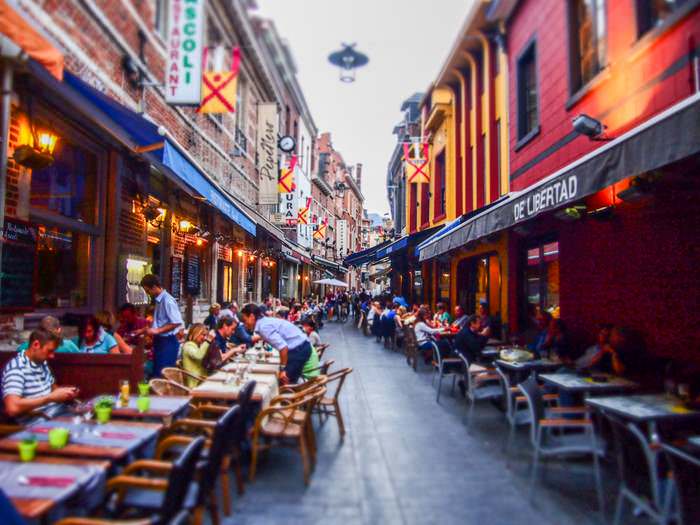 That historic city center, although rather compact, is dotted with impressive buildings and important sites. It is, however, possible to explore the entire city center and see most of the architectural and cultural highlights in one full day. Tourism Leuven offers a convenient booklet of walking tours for only €2. The main office is open every day of the week from 10 am to 5 pm and is housed in the Town Hall on the Great Market Square
Tourism Leuven
Town Hall
3, Naamsestraat
3000 Leuven
Tel: 0032 (0)16 203 020

As the tourist office is located in the Town Hall in the very heart of the city, it is only logical that tours depart from there, too. The Town Hall is without question one of the major landmarks in Leuven; a truly majestic Gothic building adorned with no less than 236 sculptures of prominent residents, saints, and the Counts of Leuven and Dukes of Brabant. It is a breathtaking structure, and arguably one of the most beautiful Gothic edifices in the entire world. 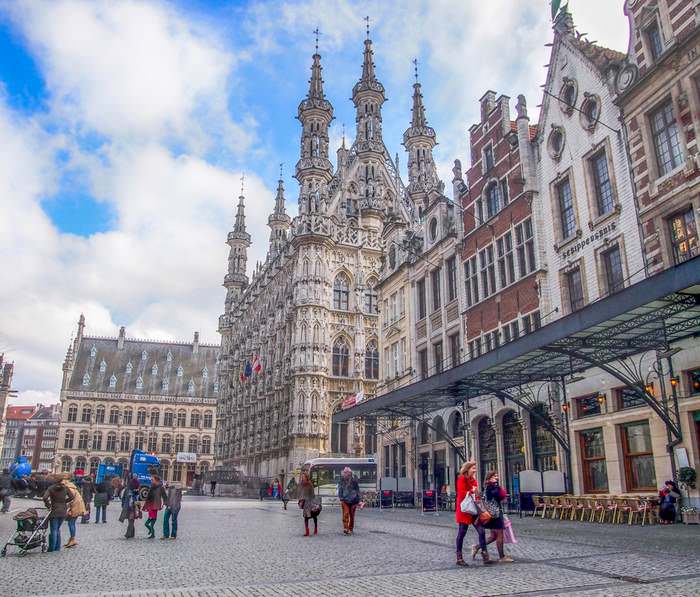 Across the Great Market Square from the Town Hall stands the equally imposing Saint Peter’s Church. Although the church’s spires were never finished, it still makes for an impressive sight. The towers are 50 meters (164 feet) high, but were originally meant to be 169 meters (554 feet) high. Nevertheless, the building’s exterior and interior are stunning—it is included in the UNESCO World Heritage Site known as Belfries of Belgium and France. 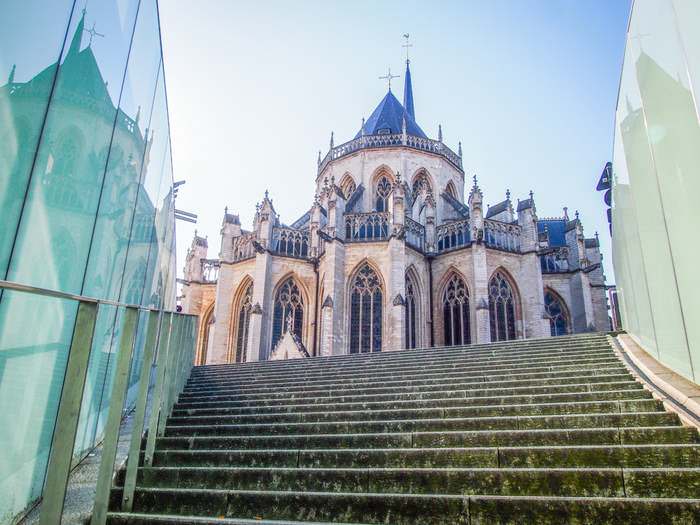 Another absolute highlight is found on Ladeuzeplein, or Ladeuze Square in English. The University Library is sometimes considered to be among the world’s most beautiful library buildings. This one was designed by an American architect after the First World War, as a gift to the people of the city. The library’s bell tower is home to one of the biggest carillons on the planet. 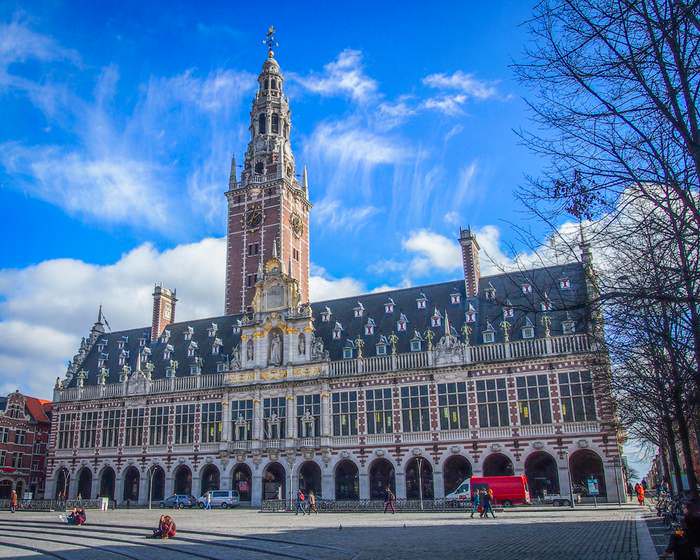 The University Library of Leuven

Continuing the walking tour of Leuven, another historically significant place is the Grand Béguinage, which is one of the best-preserved béguinages in its style. With its cobblestones, red-brick row houses, churches and green gardens, it is a quiet and quaint place to go for a stroll. The Grand Béguinage in Leuven was declared a World Heritage Site by UNESCO in 1998. 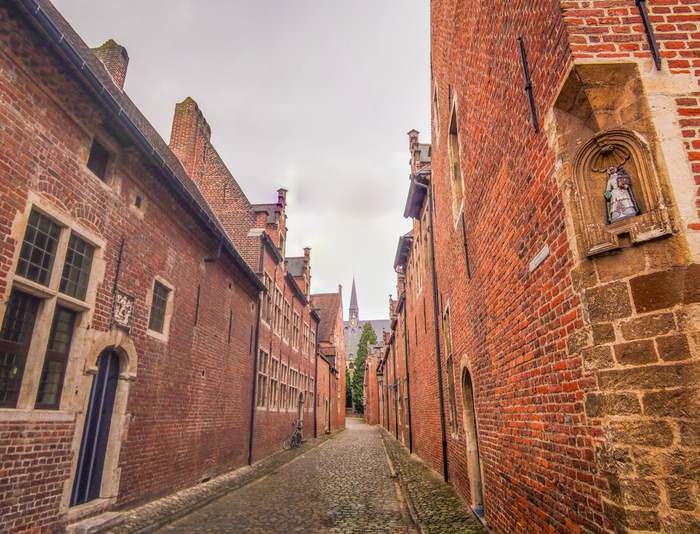 There are also several other religious landmarks in the city, from small chapels to large churches. One example of such a large church is Saint Michael’s Church with its towering façade that lies on the way to the Old Market Square. 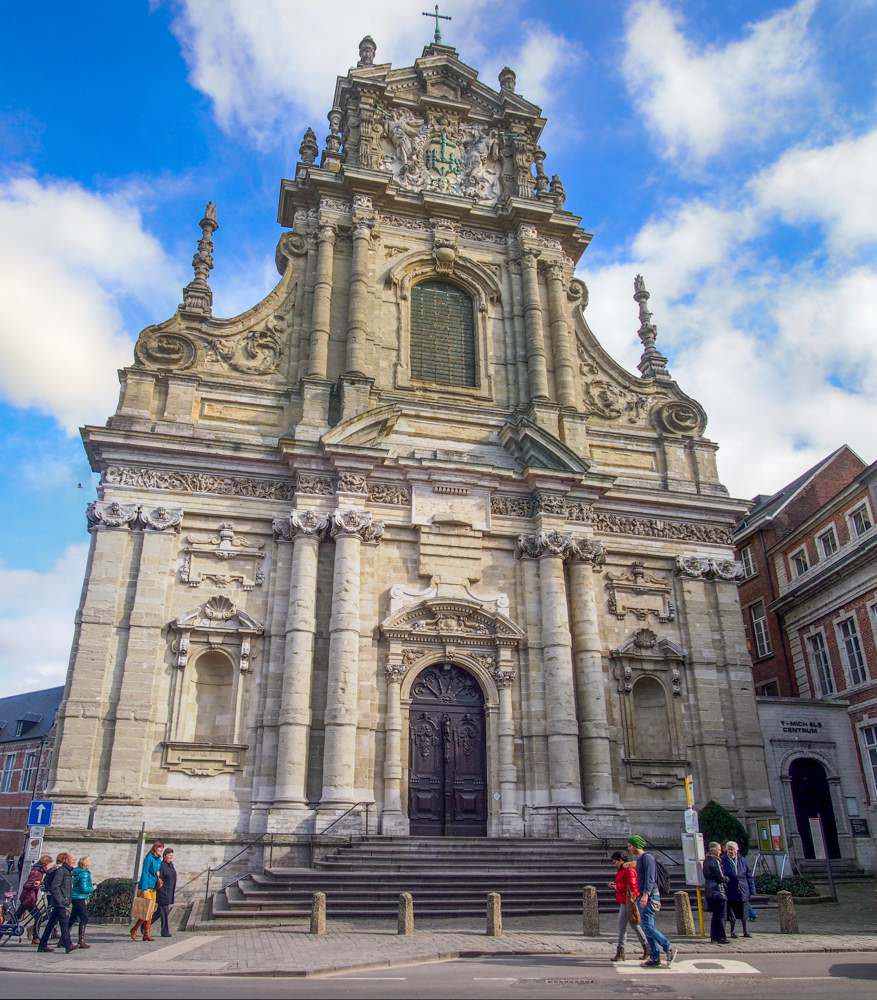 Leuven’s Old Market Square lies in the heart of the city, not too far from the Great Market Square. This square is entirely enclosed by gorgeous medieval step-gabled row houses—a few narrow (pedestrian) streets end at this square. The Old Market Square’s row houses are almost all home to bars, restaurants and cafés. In summer, the square fills up with tables and chairs of the bars’ and restaurants’ outdoor terraces. This is the heart of social life in Leuven; a place that’s always crowded with students and professors on a break, as well as tourists and locals enjoying the surroundings. Because of the high density of neighboring bars and eating venues, Leuven’s Old Market Square is often referred to as the ‘longest bar in the world’. 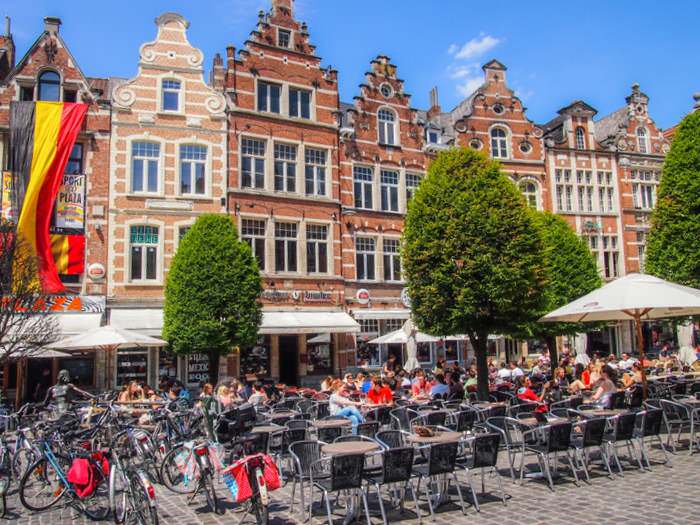 Additionally, Leuven is also the headquarters of Anheuser-Bush InBev, the world’s largest brewery. This is the brewery that first brewed Stella Artois and now also owns major beer brands such as Budweiser and Corona. The Stella Artois brewery is open to visitors on Saturdays and Sundays. The brewery lies close the train station and sometimes you can even see it when stepping off the train.

Article written by and photos by Bram Reusen for EuropeUpClose.com

It looks so charming! I only visited Brussels and Brugge on my Belgian weekend trip!

Gorgeous! I have visited Belgium in August (Ghent, Bruges and Brussels), but will definitely have to go back to see more (like Leuven! or Antwerp)