On a recent trip to France, I made it a point to stop in Lourdes. To be quite honest, Lourdes had never really been on my radar during previous trips and while I was living in the south. Each time I returned to the States, members of my Catholic family would inevitably ask if I had been to see it- to which I would sheepishly respond “no, maybe next time.” So, this time around, I felt I should take a peek and see what this celebrated town in 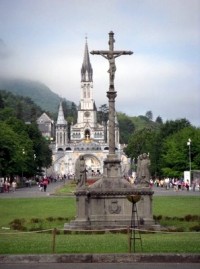 southwest France had to offer. The town of Lourdes itself is quaint and lovely, and clearly dedicated to the preservation of the memory of Saint Bernadette’s Marian sighting over 150 years ago. And this dedication serves them well; on average, Lourdes welcomes over 6 million visitors per year, whose spending supports a majority of the town’s 15,000 inhabitants.

The short version of the story of Saint Bernadette is as follows. A devout Catholic, fourteen- year- old Bernadette Soubirous was out walking with her sister and a friend. Unable to keep up with her companions, she removed her stockings and shoes to cross through a stream in order to catch up to them. All of a sudden, she felt a gust of wind and looked up to find a woman clad in blue and white with a yellow rose on each foot. This was the first of 18 apparitions that year. As the story goes, she prayed the Rosary with this woman and was eventually told by her to drink from the source.  The woman indicated a muddy patch of ground from which, after Bernadette began placing mud in her mouth, water began to spring forth. Bernadette’s friend placed her wounded arm in the water and was immediately healed. 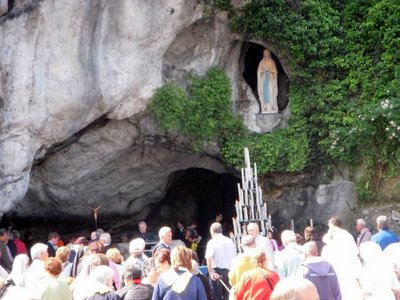 Today, many pilgrims who arrive at Lourdes hope for similar miracles. After winding through dozens of souvenir shops selling rosaries, prayer cards, magnets, statuettes of Saint Bernadette and The Virgin, plastic bottles in the shape of Virgin Mary (to fill with holy water- the water is free, the containers are not), I (and the thousands of tourists with whom I had inched through the streets) eventually came to the grandiose light blue cathedral built near the grotto where Mary had appeared in 1858. We arrived just in time to sneak in behind a hoard of tourists snapping pictures of the Sunday liturgical procession. Around 30 priests, flanked by altar boys, were blessing people in the crowd.

Fascinated by this religio-cultural phenomenon, I decided to strike up a quiet conversation with some nearby tourists, asking them about their impressions of Lourdes. The responses I received ranged from “life changing” and “healing” to “gaudy and offensive” to “just another tourist trap.” However, the most thought-provoking response came from a close friend who describes herself as spiritual, but not Christian: “There was definitely something mysterious and engaging about the grotto. The energy was positive- as if the combined hope of millions of people was circling around the cave.” Whether you believe in the miracles that have allegedly taken place at Lourdes or not, one thing is sure- your understanding of both French and Catholic cultures will be deepened after stopping by. And, if you’re anything like this curious traveler, you’ll come away with many questions.