One of the most memorable Saturdays I have ever had was spent strolling around the international city of Strasbourg. Strasbourg is located in Alsace-Lorraine, a region on the Franco-German border. Though Alsace-Lorraine has fallen under both German and French jurisdiction throughout its history, it has been a part of France since 1945. Strasbourg, it’s principle city, is known throughout the world as the seat of the European Parliament. 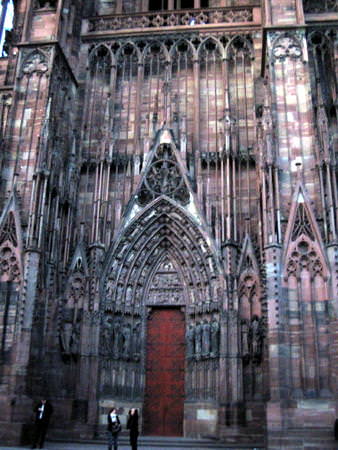 Our morning began in Strasbourg’s historical center with a tour of Notre Dame Cathedral. Though stylistically similar to its Parisian sister, Strasbourg’s Notre Dame is pinkish-red in color and features a single tall spire that stands over 466 feet high. One of Europe’s most famous Gothic cathedrals, Notre Dame was built on the site of a Roman temple in 1015. After a fire destroyed most of the original building, reconstruction began in the 12th century and ended in the 15th century.

After our tour of Notre Dame, we stopped for lunch at a nearby restaurant, Le Gruber. Located in what looks like a gingerbread house, Le Gruber serves up fantastic Alsacian cuisine and has a wonderfully kitschy decor. I recommend the pheasant in white wine sauce, the duck foie gras, or the  pikeperch filet in matelote sauce.

After lunch, we spent the afternoon in three of the city’s best museums; the Musée d’Art moderne et contemporain, Musée des Arts décoratifs, and the Musée des Beaux- Arts. 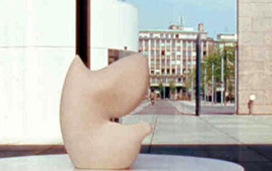 This modern art center opened in 1998 and houses a vast permanent collection, including work by Gustave Doré, Jean Arp, Max Ernst, and Vassily Kandinsky. In addition, they host various rotating shows and an excellent lecture series. Almost as impressive as the museum itself is it’s well-stocked library. We stopped for coffee at the restaurant in the museum and were quite pleased with our croissants and cafés.
Hours: Tuesday, Wednesday, Friday and Saturday: 11 a.m. to 7 p.m., Thursday from noon to 10 p.m., Sunday from 10 a.m. to 6 p.m. Closed on Monday
1, place Hans Jean Arp,
67076 Strasbourg Cedex
Tel: 03.88.23.31.31

The fine arts museum is also located in Palais Rohan- on the first floor. We thoroughly enjoyed their skillfully curated collection of European paintings by celebrated artists such as Boticelli, Greco, Rubens, Canalleto, Goya, and Delacroix. Hours: Every day except Tuesday, from 10 a.m. to 6 p.m.
Palais Rohan – 2, place du Château
67000 Strasbourg
Tel : 03 88 52 50 00

Museum of decorative arts is housed in the breathtaking Palais Rohan, a palace that was designed by the royal architect Robert de Cotte in the 18th century. The collection is comprised of decorative artifacts from Strasbourg, dating from 16th through 20th centuries.
Hours: Every day except Tuesday, from 10 a.m. to 6 p.m.
Palais Rohan – 2,
place du Château
67000 Strasbourg
Tel : 03 88 52 50 00

Up Close Picture of the Week: Strasbourg at Christmastime | EuropeUpClose.com

[...] var addthis_product = 'wpp-262'; var addthis_config = {"data_track_clickback":true,"data_track_addressbar":false};var addthis_options = "pinterest,stumbleupon";if (typeof(addthis_share) == "undefined"){ addthis_share = [];}Strasbourg is beautiful any time of the year. But at Christmas, Strasbourg really shines. It seems that every shop in the old town is decorated to the hilt. And, Strasbourg celebrates with more than just one Christmas market, so you simply can’t see it all in a day.  Here are more photos of Strasbourg at Christmastime. And, if you’d like to learn more about Strasbourg, read Jen’s article:  A Saturday in Strasbourg. [...]

Glad that you had a nice - if brief - time in our wonderful city. I moved here eight years ago and absolutely love it!

i LOVE strasbourg - thanks for reminding me what a wonderful place it is!