If you were to take the third arrondissement of Paris and drop it down in the middle of Iowa, people from all over America would flock to see this marvel. But apart from its hot spots, “le troisieme” (also called Temple) is often overlooked by visitors to Paris. 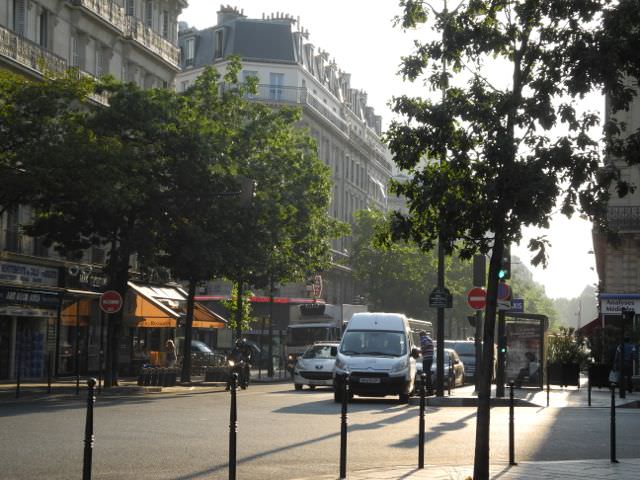 The arrondissement (district) numbering system for the city starts at the area around the Louvre, ground zero for tourism. The numbers then circle clockwise in ever-widening arcs that end with the 20th district on the eastern edge. The 3rd is central but retains a community feeling, a place where you can still hear the charming soundtrack of Paris: the noon church bells, the cooing wood pigeons, the occasional claxon and the laughter of children.

Bordered by the Porte Saint Denis, the Place de la Republique, the Place des Vosges and the Centre Pompidou, this little gem nestles quietly within easy walking distance of all those destinations. It comprises the upper portion of the area known as the Marais.

The 3rd is still very much a working community. I came upon not one but two luthiers and a bow maker, too. There are clothing alteration shops, barbers, closet-sized internet service shops, a garment district, a street devoted entirely to shoes, and even a guy with a table out on the street offering to laminate your important documents. You can have a massage/reiki/shiatsu treatment, have your tarot read, practice yoga or request a “drainage lymphatique manuel”! 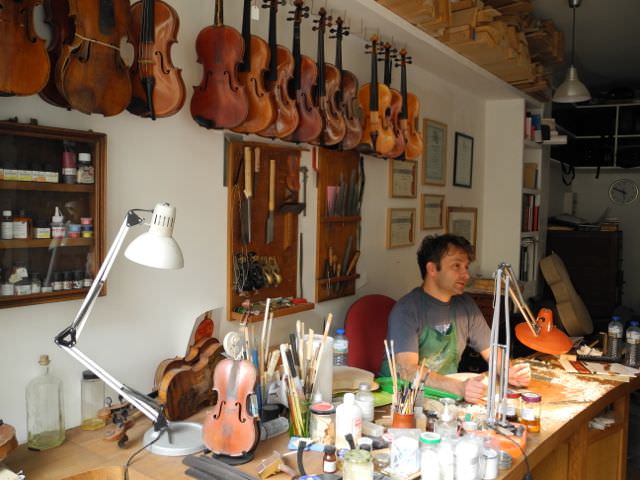 First-time visitors to Paris are likely to take in the big-draw features of the 3rd: the Musee Carnavalet (and its exquisite gardens) devoted to the history of Paris, and the Picasso Museum (closed for renovations until spring 2014). Some visitors may also discover the Musee Cognacq-Jay (Hotel de Donon, 8, rue Elzevir), with its Enlightenment collection of paintings, tapestries, sculpture, furniture and art objects in the home of the founder of La Samaritaine department stores. 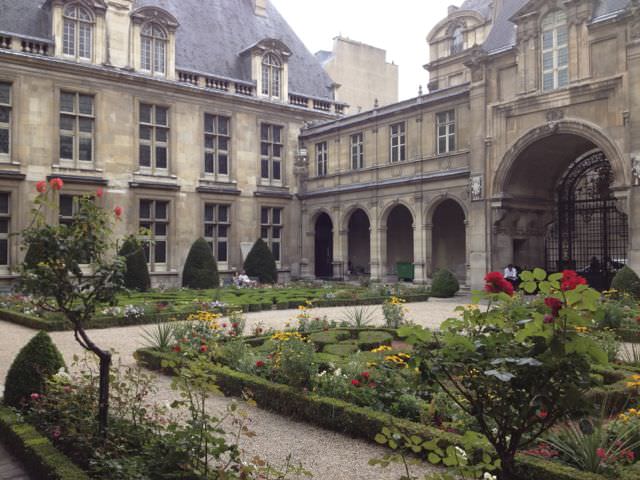 Garden of the Musee Carnavalet

However, the 3rd has several other fine museums of note: 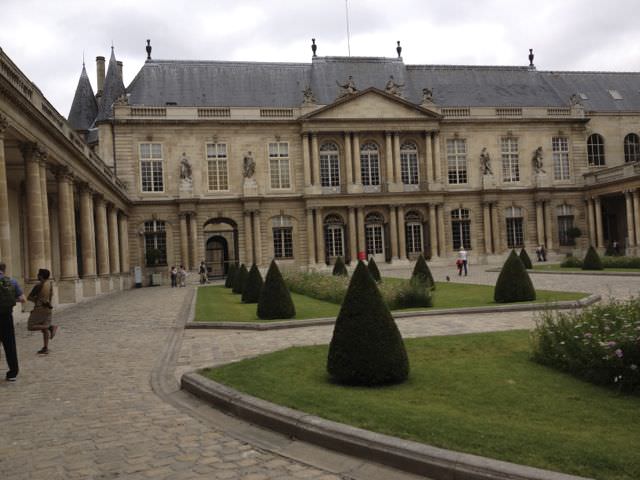 It’s the Musee des Arts et Metiers (60, rue Reaumur) that caught me by surprise, though. Built on the grounds of the 11th c. Saint-Martin-des-Champs abbey, the 12th c. church remains but with the addition of Foucault’s pendulum, several early-model automobiles and three airplanes all installed in the church interior. It’s the oddest combination of whacky and beautiful. 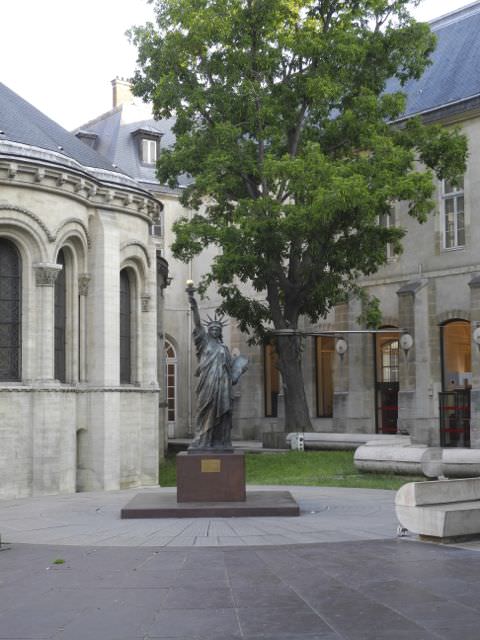 A 12th c. corner tower and certain wall elements are also still visible. This museum was founded as a repository for scientific instruments and inventions which may sound a bit dusty. Trust me, it’s not. And if you just want to dip a toe in, go on Thursday evening when it’s free. 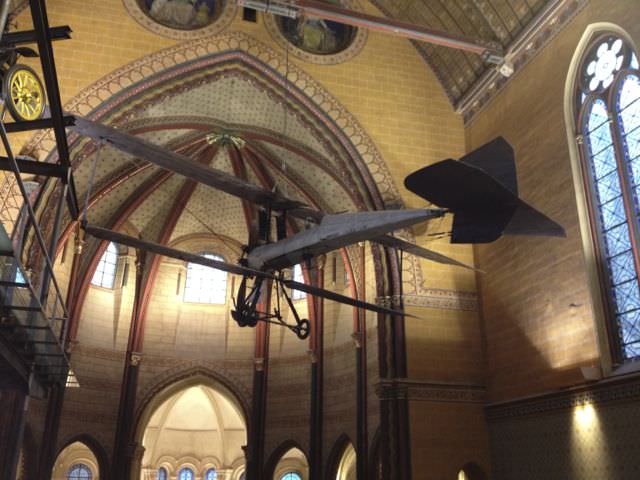 Around the corner from the museum on Rue Saint Martin is the Square Emile Chautemps, a beloved and well-used shady park with fountains and benches. In the mornings, it’s the dominion of babies and children. By afternoon and evening, it’s frequented by the older gents playing petanque, or boules, in the well-maintained courts. I attended a Sunday evening petanque tournament and even twenty-somethings were trying their hands at this traditional French sport while the older set looked on. 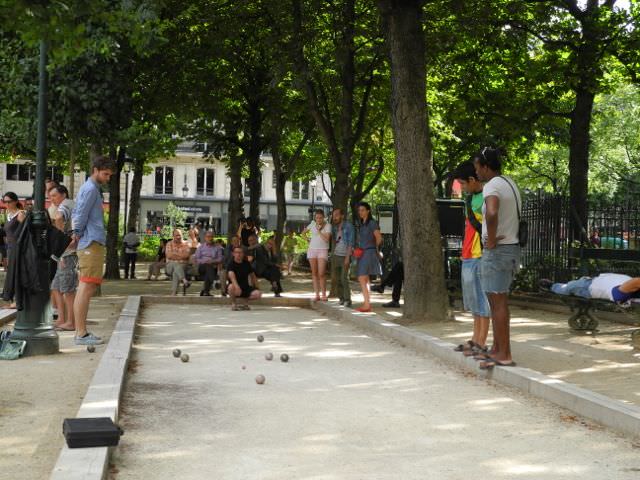 There are many spots of calm in the 3rd known as “espaces verts,” squares or parks. The Anne Frank Garden (access through Impasse Berthaud near the doll museum) has an impressive complex of pergolas and a chestnut tree grafted from a branch of a tree near her home, described in her diary.

Two others that I stumbled upon by accident are the Square du Temple (corner of Rue du Temple and Rue de Bretagne) and the Square Georges-Cain (Rue Payenne), named for a former conservator of the adjacent Musee Carnavalet. They are both sanctuaries of quiet where people come to have lunch, read, practice tai chi or simply sit. These spaces offer deep enough verdure to give your nose a restorative dose of oxygen and the clean scent of plants. 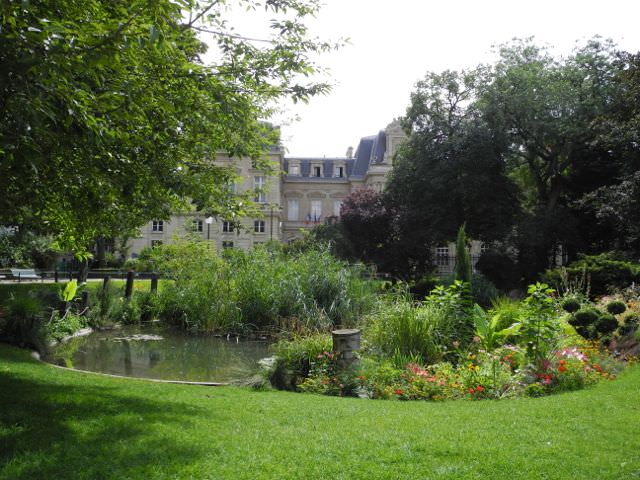 The Square du Temple is so named because it is where the chevaliers of the Knights Templar called home in the 13th c. In 1667, a palace was built and it was here that Louis XVI spent his last days before being executed.

The Square Georges-Cain seconds as a lapidary depot: a clock gable and columns from the Tuileries that were salvaged after a fire and several sculpted pieces from Louis XIV that come from the chateau of Saint-Germain-en-Laye. There’s a statue in the middle by Laurent Magnier, whose work can also be found at Versailles. 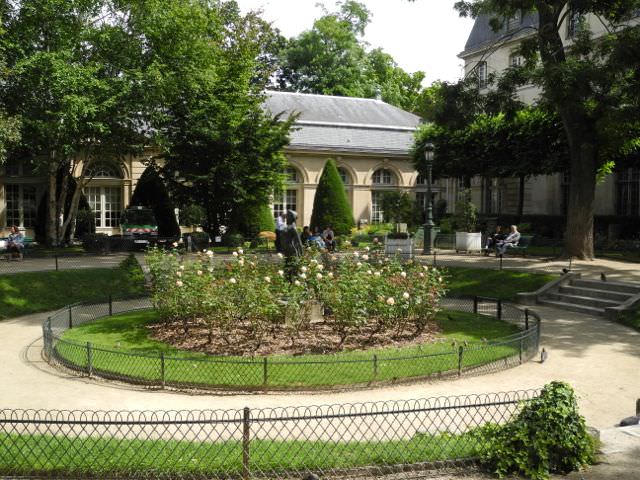 Many of the churches in Paris make their spaces available in summer for free performances and they can provide a welcome respite after a day on the trot. This is also true in the 3rd. At the Eglise Sainte Elizabeth (195, rue du Temple) I attended an English children’s choir performance and a twelve-voice choir from the local area, both quite charming. On one particularly hot evening I slipped my shoes off and cooled my feet on the stone floor while I enjoyed the music and stunning acoustics—a transcendent experience. 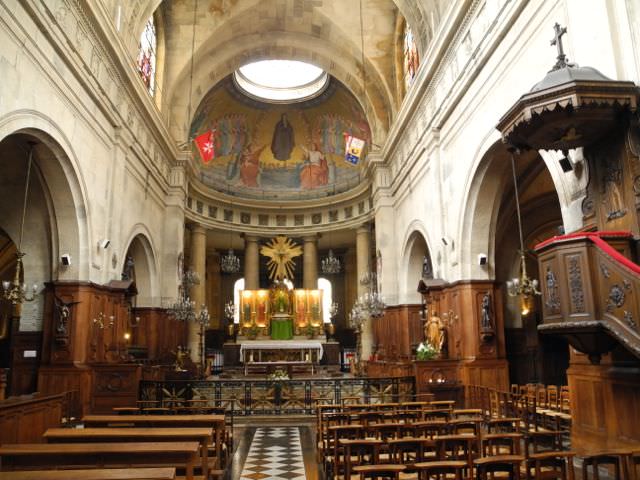 Incidentally, the building of the Eglise Saint Elizabeth began in 1628 with support from Queen Marie de Medici. In 1938, it became the church of the Knights of Malta, including the armory which it still holds. On one wall is a painting entitled “Les Adieux de Louis XVI a sa famille, 20 janvier 1793” (“Louis XVI’s farewell to his family, January 20, 1793”) showing the king’s final hours with his weeping family. He was held nearby prior to his execution. 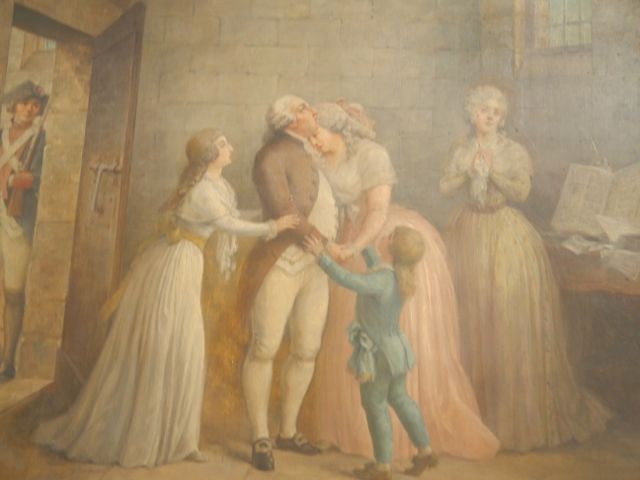 The Cathedrale Sainte Croix des Armeniens (6 Ter rue Charlot), has an ambitious August festival including daily performances in the afternoons and evenings of classical music featuring various visiting artists. I heard a virtuoso piano recital of Bach, Haydn, Chopin, Debussy and Ravel performed by Hitomi Obaraki one afternoon when I needed a change of activity and came away refreshed and renewed.

The richness of this district extends to places to eat. On Rue du Vertbois, a quiet side street that is no more than four city blocks long, there are probably ten restaurants. Ami Louis (32, rue du Vertbois) is frequented by presidents and prime ministers though you wouldn’t know it by its exterior. Pramil (9, rue du Vertbois) is a Zagat superstar. Others all over the 3rd are famous simply with those who live in the area and love them and fair weather fills them to capacity.

We had three meals at the lovely Pramil because we chanced upon it. The menu posted outside included a gazpacho with cucumber sorbet. Who could resist such an idea? Alain Pramil, the proprietor and chef, is a self-effacing and cordial man who circulates among his clientele to find out if they are enjoying his food. 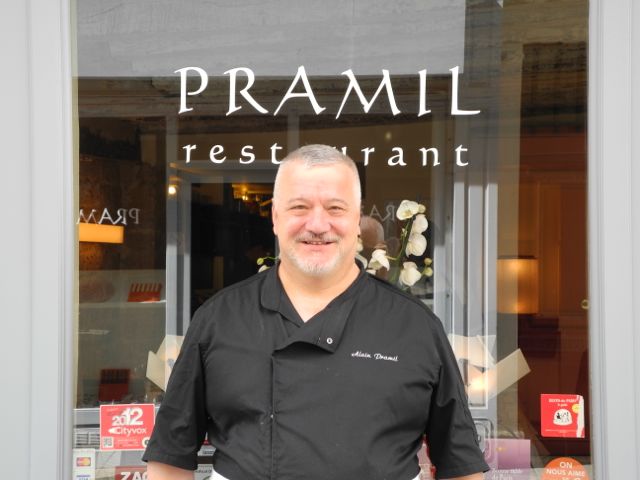 A La Massara (70, rue de Turbigo) is an Italian restaurant with servers so authentic that you transact your business in Italian whether you speak it or not. It all works out with warmth and humor. There’s a pizza shaped like a star that is wonderful and the starting drink, a spritzi one, was fun and light.

I mention these just as examples of what you can stumble across and because the food and service is very good. But the district is saturated with wonderful places, outdoor terraces under leafy plane trees and delicious scents emanating from the kitchen. Chart your own course and you’ll probably have a delicious meal just about anywhere. 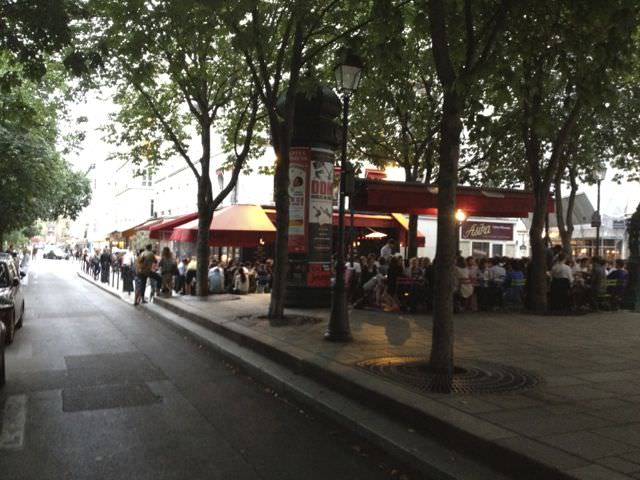 A Sidewalk cafe in the 3rd Ar.

While we’re talking about food, one of my favorite pastimes is to drop into a café/bar for “un café” (that’s an espresso) at the counter. It only costs 1 euro and the entertainment value can be quite high. I’ve also discovered “le financier,” an almond meal cake about thrice the size of a madeleine and twice as delicious.

If a picnic is in order, specialty and sub-specialty food shops abound. Not only are there shops devoted primarily to meat, there’s one in the 3rd devoted entirely to different types of ham called Caractere du Cochon, or the Pig’s Character. 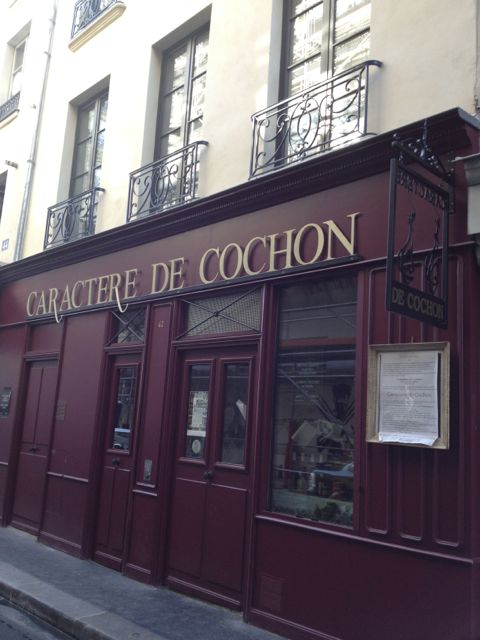 Another shop offers a giddy array of jams with flavors such as rose, lime tree, acacia, geranium, basil and more. Free tastes upon request. 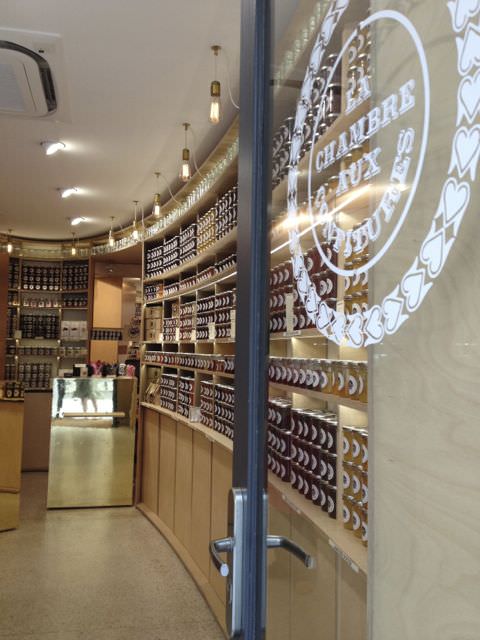 The district has lots of passages—walkways that get you from one street to another without having to walk all the way to an intersection. 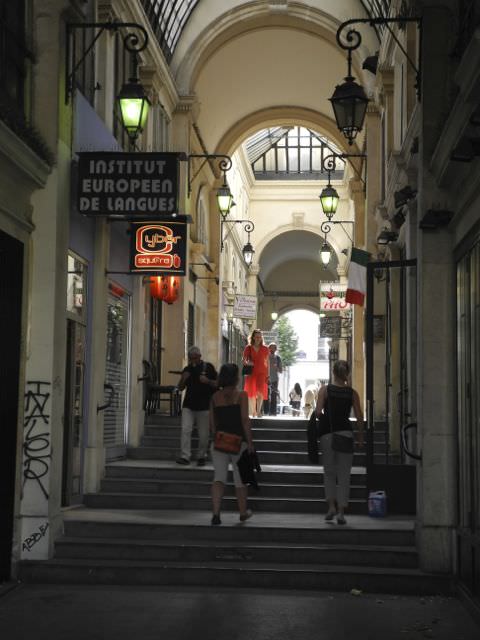 Passages can be fascinating culturally. One of particular interest leads into the Marche des Enfants Rouge (39, rue de Bretagne). Less well-known to visitors than the Marche d’Aligre in the 12th, this open-air market has the advantage of a covered roof for vendors selling fresh fruits, flowers, vegetables, cheeses, olives, cakes, meat and more. There are lots of pret-a-manger concerns offering savory plates of food from all over the world. You queue, order, pay and take your food to a nearby table where you can watch the hubbub of the market while you eat. 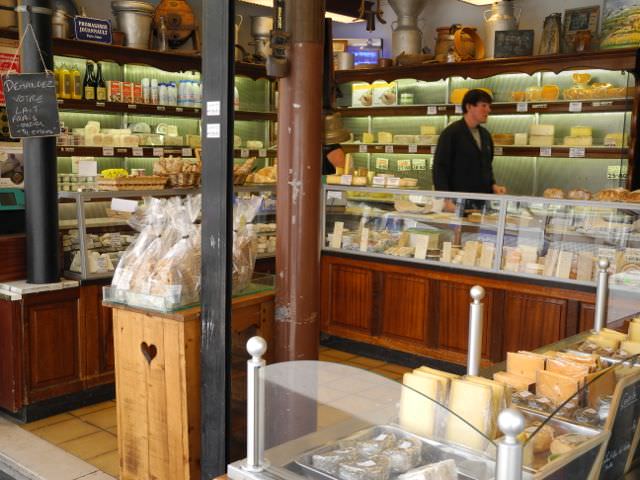 I’ve made nearly all of these 3rd arrondissement discoveries—and countless more—by accident or by “bouche-a-oreille,” word of mouth. By wandering about with no particular agenda and allowing myself to be drawn down a street or passage or across a square, I have carved out a Technicolor portmanteau of memories.

One common mistake—I’ve made it myself many times—is to get locked into a schedule that ends up driving the day. Scampering from point to point to keep up with a preordained agenda runs the risk of missing the accidental encounters and discoveries that make Paris such a fun city and form the best memories. Try not to lose your head over it. 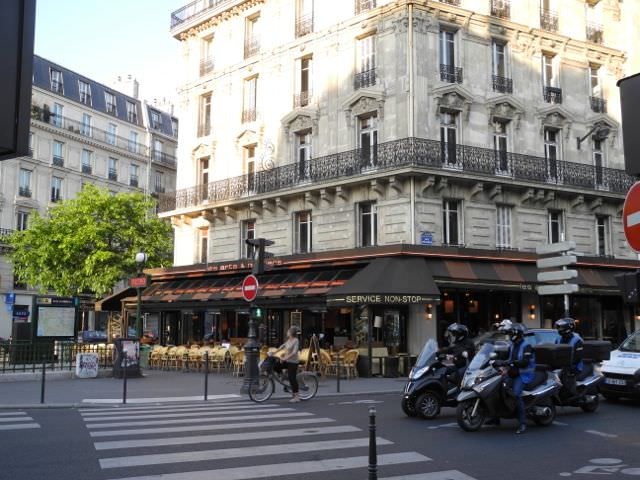 Sidewalk Cafe in the 3rd Ar.

It’s the rambler-ex-agenda that is most likely to chance upon the less-worn places of charm in the 3rd and to have more genuine contact. If you have an extra couple of days in Paris and can free yourself of expectations, I suggest you amble on over to the 3rd and especially the upper portion of it to see what you can discover. Or better yet, base yourself in this rich arrondissement in one of the many small hotels and allow the very rich hours to come your way.

Paris memories are always rendered in soft, washed pastels for some reason, so thank you for a few more.

Thank you so much, Maggie! One seldom finds such detailed description--with a generous supply of revealing photos--and that's for just a single Parisian arrondissement.

I'll certainly take some of your recommendations to heart...if I ever go to Paris (doesn't hurt to dream!).

One of my goals in life is to visit Paris, I really hope I can make it happen.

Maggie - what a lovely description - you've made me so nostalgic - I know I'll have to go visit Paris again!